Lettered and Designed by Jeff Powell

The list of creator-owned comics has been steadily growing in the past two decades.  With the advent of Image Comics “own your work” business model the number of creator-owned properties has exploded with varying degrees of success.

The ones that usually end up being my favorites are not the ones that become hugely popular in a business sense.  Jeremy Bastian, David Peterson, Roydon Lepp, and Charles Paul Wilson have each created a world and a fan base through deeply beautiful work and constant, hard-headed dedication to their craft and their story.  I can speak for the longevity of this creator, but I certainly see the dedication a skill in this first issue of Renato Jones: The One % to see that Kaare Kyle Andrews could easily make the list as well.

Renato Jones was born to privilege, and then that privilege was violently taken away with the dual blast of a shotgun.  After a time living on the streets as a runaway he’s returned to the “loving” arms of his family for another assassination attempt.  His rescue is secured, his family’s manservant of course, and we flash forward to the present, when he is a knife-gun wielding

This is not a Batman story.  Nor is it a Ghostrider tale.  This is a thing all it’s own.  Renato Jones is specifically targeting the 1%, that is the top of the top, the richest of the rich, and by that turn, the most crooked of the lot.  This is the vigilante that tops all.  He’s not beholden to the law.  He’s not beholden to an overlord.  Renato Jones, in the guise of ‘the Freelancer’, is the only thing that can bring fear to the fearless, because he only works for what he feels is right.  This is a vengeance story against the wicked, specifically the morally corrupt and the financially, willfully negligent.  Seems appropriate given the events of the last five years. 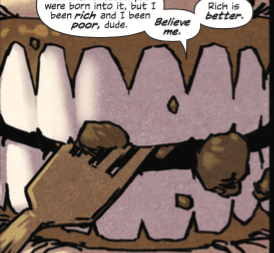 The art style seems like a glorious throwback to me.  I see shades of Frank Miller here, as if Andrews was able to freeze that style right after The Dark Knight Returns and use it here.  There is none of the change that we saw in later Miller works, instead there is that wonderful use of negative space, those hard lines that we loved from that epic story.  Even the character design seems to have evolved from some of those early Miller drawings, the blocky body styles and thin lined mouths, that mark that earlier work.  It not only cements this book for me as wonderful to look at, but gives it a nostalgic feel despite it’s futuristic print date.

I’d like to give props to Andrews specifically for the last page of this book.  “Create until you build a pile of life so high the dead can’t reach you.”  It’s just one of a number of fantastic quotes that Andrews spills out in his plea to creators.  His message?  “Create.”  I, for one, always felt the tug of “I can’t because…” and only recently began to do the things I love.  Andrews, with much more beautiful and expert language use, makes it seem so much more easy.  It’s a wonderful message, and one that should and does inspire.

Pick up Renato Jones: The One %.  You’re supporting an indie creator, increasing his ability to create, to inspire.  Plus, you get a kickass comic book with killer art.