Summary: To bridge the gap between Naruto and Boruto as the story for the next generation of ninja is about to begin, Kishimoto returns for yet another “one last story” set in the world he created before moving on to bigger (and better?) things. This chapter focuses on Mitsuki, Boruto’s friend and teammate, and the secrets of his origin. Something that was heavily hinted at in the Boruto: Naruto the Movie film but never elaborated on.

Review: Overall, this was a solid but still underwhelming chapter. Were you expecting anything more?

Mitsuki is a character that was definitely interesting in the film but I feel this chapter hurts him quite a bit in the long run because of how unnecessarily convoluted and difficult his origin seems to be. The chapter is just one long one-shot Kishimoto seems to have thrown together to showcase a “touching” story of a boy who wishes only to know where he comes from. And when he finds out, what then will he become?

It was heavily hinted at in the film that Orochimaru was Mitsuki’s parent, which makes since because after all the ninja we grew up reading about got together with one another and all basically effed like crazy once the war was over, it would make sense that Orochimaru would also want to get in on the baby making game as well.

However he went about things quite a bit differently, and here it’s revealed that this version of Mitsuki is the 6th generation of clones Orochimaru has been creating to essentially make AI – a being that is of its own free will and won’t follow even Orochimaru blindly into the depths of hell, but blaze his own path and make decisions for himself. 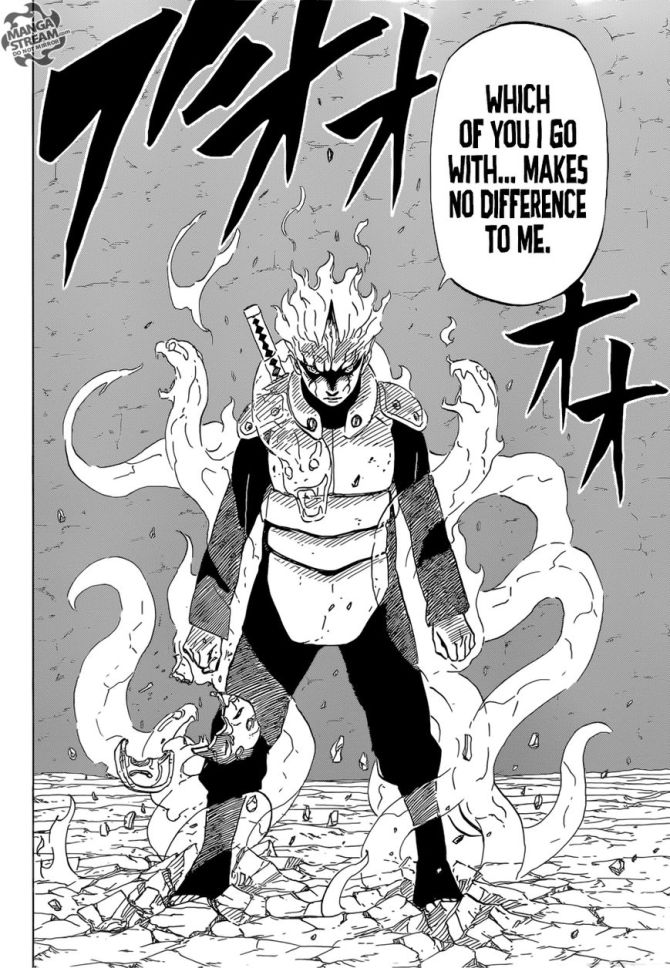 Now, I’m really not sure why Orochimaru decided to make a kid or what his end goal with Mitsuki is, but the roundabout way Kishimoto tells the story leaves a lot to be desired. Mitsuki and Orochimaru go up against a ninja that “has the skill to steal memories” and Mitsuki’s lost his. So they’re out to take down this ninja and return Mitsuki’s memories to him.

Along the way though we discover multiple things through exposition. 1. The ninja they were battling was an older generation of Mitsuki that follows Orochimaru, 2. The whole thing was a ruse to see what Mitsuki would choose when put between a rock and hard place as Orochimaru does here. And 3. Somehow Mitsuki has the ability to go Sage Mode, a level of power originally held exclusively by the Legendary Sannin – which Orochimaru is one – and Naruto, who was taught by toads.

We also get a whole scroll retrieving subplot, that Orochimaru had a “secret” locked away in said scroll that he did not want the enemy ninja getting their hands on. When Mitsuki steals the scroll from Orochimaru, who’s since revealed the truth to Mitsuki, and his older self, it’s revealed that Orochimaru placed a picture of the “sun” within the scroll in order to help Mitsuki choose the path ahead of him and blaze his future. Illuminating his path, so to speak.

That “sun?” Boruto, which is creepy and I’m not really sure how seeing a picture of a random boy suddenly makes Mitsuki decide how he’s going to live his life. That literally makes no sense and yet by the end of the chapter it’s literally a picture of Boruto, someone he’s never met at this point, that has inspired Mitsuki’s life choice to be a good person and ninja.

I didn’t hate the chapter overall though in case you’re wondering. I just feel the characters could’ve made smarter decisions within the story and I feel Kishimoto didn’t really need to make the story so obviously layered and especially drowning it with needless revelations. It’s his style though, and  I’m curious to see where the series goes from here without him writing it.

Boruto premieres in just under a week. … Let’s do this!

Final Score: 2 Failed Experiments out of 5