I’ve long been a fan of Grant Morrison, when Klaus came out I made sure to review the first issue.  Retelling a classic tale comes with a certain amount of baggage, the years of preconceived notions, and also a set of crosshairs from “the INTERNET”, which is ready to jump at the first sign of weakness.  Morrison has a pedigree that is among the highest in the industry, one that would allow him a measure of bulletproofing.  He doesn’t need it.

Klaus, for those of you who haven’t been reading it, takes place in the mythical village of Grimsvig, a hamlet under the iron fist of Magnus, who has had the villagers under his thumb since the death of their previous ruler, his father-in-law.  Klaus was a man of the woods, a loner who ventured into Grimsvig at the wrong time, and was attacked by Magnus’ soldiers, brought to the woods and left for dead.  Along the way, with the express purpose of creating the joy that Magnus has outlawed, Klaus begins creating toys for the children of the village, and with the help of “the spirits of the woods” brings them a small amount of magic.

Issue 4 further deepens the mystery and intrigue at the center of the story.  For those of you who read Stephen King’s The Dark Tower books, this is the Wizard and Glass chapter, the one that fills in the back story that you didn’t know you wanted in the main arc.   We find out in this issue why Klaus left Grimsvig in the first place and what his relationship to Dagmar.

Issue 5 rockets along at breakneck speed.  Magnus is teetering on the edge of madness, alternately pleading for help from Dagmar whilst making insane demands of the workers in his mines.  The mines are not just home to the coal that the miners haul out, but a sinister voice that they’ve begun to hear, one that has been having conversations with Magnus.  Klaus has continued his joy spreading, learning that the chimneys are a good way in and out of closed houses.  Magnus and the Grimsvig guard are on the offensive, ready to spring a trap into which Klaus must inevitably fall.  There is betrayal and salvation all in a few pages.

Dan Mora’s (Hexed) art is phenomenal, capturing the fairy tale feeling of the story and mixing it with the sword and sorcery aspect that Morrison has interwoven within the tale.  There are some panels, especially with massive cave or building backgrounds, that are great, and the action scenes, so important in a comic (and suddenly much more so in a Santa story) are impressive. 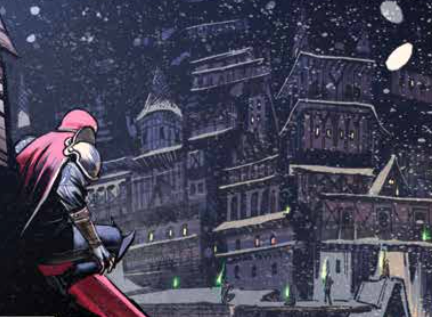 Morrison has perfected the retelling of a story.  He’s taken the basics, the gift giving, the chimneys, etc., and has woven in a loner-in-a-medieval-village story.  Where some characters like Magnus, the evil vizier turned ruler, could come off seeming trite and used, they come out feeling fresh.  As Magnus, in this issue, was whining and pleading with Dagmar for help, I remember thinking, “this is how this should be…it works, I know this idea…but it works…”.

My one criticism, and this probably has way less to do with the creators than with the publisher, is the cover image.  I was so wanting a battle between Klaus and what is obviously the voice in the rock’s owner, a Krampus-type character, and that was not delivered.

In the end Morrison and Mora have delivered the kind of comic that kept me checking the page counter on the side of my digital viewer, just as I check the clock while watching a favorite television show…and watching the numbers get steadily higher, wonder…”how can this be over already?”  Fortunately it’s not, because Klaus will be back next month.