People get into a rut.  You read book upon book, comic upon comic, commenting all the way, and then you realize, am I still doing this because I like it, or because I feel the impending NCBD coming and I’m not caught up on what happened last month?  Then you pick up a book like Four Kids Walk Into A Bank, and you feel the urge to read and write and review some more.

This new series from Black Mask Studios comes out this Wednesday, a five part mini series written by Matthew Rosenberg (S.H.I.E.L.D. Secret History, Twelve Reasons to Die) which reminds me of Stand By Me meets Ocean’s 11.

This is a heist book.  It has to be based on the title, and in this first issue we begin to see the roots of that weaving their way into the lives of the four kids.  (Also, you know, the title.)  Berger, Stretch, Walter, and Paige, out heroes and zeroes at the same time, are outcasts, the dregs of middle school society, and have formed their own protective niche, walled with twelve-sided dice and mortared with the biting sarcasm that only pre-teen or just-teen kids can sling at each other.

This is really Paige’s story, a girl who’s lost her mother, is living with a somewhat distracted father and finds her family mainly in the boys, who treat her just like another boy.  It’s at this point, when they know everything that may come down the pike, the unknown walks through the front door in the form of a group of hardened criminals who seem to be familiar with Paige’s father. 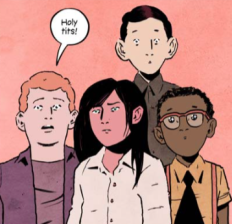 This book grabs on to you and holds you there.  Rosenberg has captured that Stand By Me moment to perfection.  (I know there is no girl in the main group in that film, hang with me for a second.)  It’s the display of childhood friendship that Rosenberg really captures here.  That pre-puberty balance of friendship that boys and girls lose around thirteen and don’t gain back until, sometimes, much later in life, once sex becomes less than the most important thing in the world.  Perhaps, it never returns to that pure moment.  But here, in these waning days of childhood, before sex looms it’s many tentacled mane, here they are just friends, and that is a time of life that is magical for everyone.  We remember that time, when you left school and disappeared into whatever game you played with your friends until you were called for supper.  When you could spend a rainy day reading a book, and at the end of the day, feel like that was accomplishment enough. 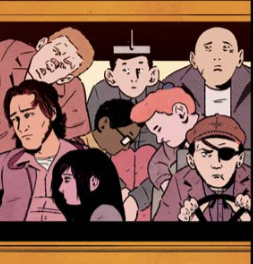 Tyler Boss (Lazarus) should get some fantastic credit for the layouts and art in this book.  Between the clever, “role-playing” stat boxes that each of the characters gets, the designs and overall art are great.  Some of the pages have a lot of panels, but they’re balanced well and Boss’ style has a lighter feel to it, which works well with some of the heavier aspects of the story as it progresses.

Get out of that rut.  Pick up Four Kids Walk Into A Bank this week and read it.  Mathew Rosenberg and Tyler Boss have given us the gift of great story and great art in five parts.  This is a new era for comic books, and Black Mask is on the forefront of what comic books can be, and what they should be.