Story and Art by Kentarou Miura

Summary: Far into the future the world is a very different place than we know it now. Creatures and civilizations of all sorts exist side-by-side yet also in constant states of war. Using Titans, giant creatures to do their bidding, many of these civilizations battle one another for supremacy. Two unlikely wanders, a former Gladiator named Delos, and a God child named Prome find themselves in a civilization made up of bug people on the brink of extinction. When attacked by a Titan from another Kingdom an epic battle for survival begins…

Review: Giganto Maxia is a really fun series. Of course that’s what you’d expect from the creator of the renowned series Berserk, however this isn’t a great series. Short lived, definitely action packed, and in seven chapters manages to truly entertain the reader with wonderful characters and epic fantasies. But because it’s 7 chapters we only get a snippet into the lives of Delos and Prome as well as a taste of what wonders this world holds.

There are things wrong with this series but my biggest gripe really is that I just wish we could get more. I really, really want to see more of this world and more of our two leads. Their journey seems endless and full of possibilities, but as I’m sure this was just a filler series to kill time in between chapters of Berserk, what we did get overall was a really fun ride.

The series opens up moderately enough with Delos and  Prome walking the desert and finding a monster that attempts to eat them. They’re then ambushed by bug men and taken back to Beetle Men’s home as prisoners. There the two are put on trial by combat for being of the race of the enemy to the Beetle Men and Delos gets to show off his otherworldly strength as a gladiator. 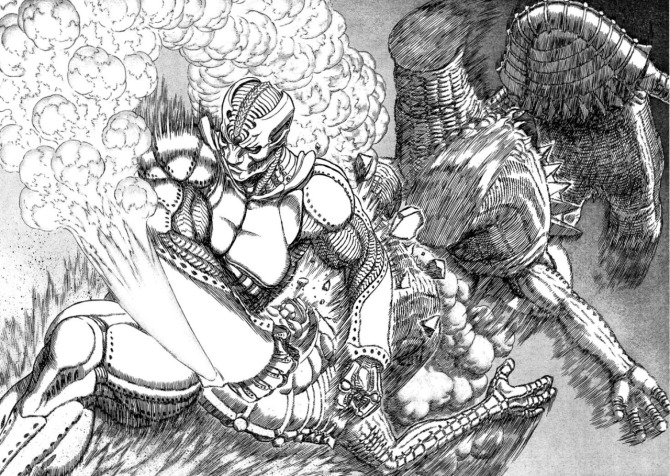 Prome is also revealed to be something of a God child, which will come in handy later. We gets talks of Titans, giant creatures used by the Patriarch (this world’s Empire) to take over other civilizations it deems an enemy. And unlike the Titans in Attack on Titan, most of these are actual creatures tamed and trained to fight and destroy. Like Attack on Titan however, during a battle in the final chapters between the Patriarch and the Beetle Men it is revealed that Prome and Delos can fuse to create a Giant. A Titan form of their own that they use to battle the Titan’s of the enemy.

I didn’t really care for Delos and Prome becoming a Titan, it just reminded me of AoT as well as took away a bit of the awesomeness that was the other Titans seen in the story. I’m not sure the limits of Prome’s abilities, but this was a bit of an overstretch for me.

However, the battle between Titans was fun to watch and it was nice to see Delos using the same wrestling moves he used in his trial to win there to also win against the Patriarch’s Titan.

What I did really enjoy about this world was now truly fantastical it was. The main story is over in the first 6 chapters, however chapter 7 acts as a sort of epilogue seeing our two heroes travel around the world and seeing what wonders can be had. It’s a beautiful and yet extremely terrifying world they live but I love how different it is from our own. And yet it’s supposed to take millions of years into our future.

Miura’s artwork is astoundingly detailed and the choreography of the fights are wonderful. I haven’t read much of Berserk but I know this man can truly dish out some mesmerizing creatures and scenes. I really like Prome’s look and how mysterious she is. Doe she have arms? Or is her cloak a physical part of her? And Delos is a wonderful buffoon they make a great pair. The Titan’s look awesome, and the Beetle Men are truly insect like in their humanoid appearance.

This series is mostly hindered by its short length and pseudo-cliche storytelling. It’s lifted however by many of the great things I’ve already talked about with it. Definitely check out Giganto Maxia if you want a short tie-over to keep you busy until the latest chapters of your currently reading manga come out. It’s really nice for that.

Final Score: 4 Wrestling Titans out of 5