Summary: Yamada wakes up on an uninhabited island after falling off the cruise ship his class was on in the middle of the ocean during a thick fog. Alone, he begins building a raft and finding ways to survive until he discovers a female classmate has washed ashore as well. The two learn to survive together until one of their teachers washes ashore and generates animosity between the three of them.

After nearly two weeks of living on this island Yamada is swept up by a fog only to regain consciousness while being rescued in the middle of the ocean 15 minutes after he had originally fallen overboard. What is this new reality Yamada finds himself in? No one believes him about the island he stayed upon with his classmate Imaise Chika and their teacher Shibata. But when Shibata shows up unscathed and with no memories of what happened it’s now up to Yamada to discover the truth for himself and find the missing Imaise.

Review: 11 more chapters, another great set for this series. In these chapters Yamada and his new group of stranded friends all come full circle in their time loop tale as Yamada is forced to watch his past life self get eaten up by the fog that originally took him from Imaise only to surprise her with future self presence still on the island. Slightly confused? I’m doing the best I can to describe it.

Before that however Yamada, Nori and Miki have some fun of their own as we get some more talk between Nori and Yamada about their feelings for one another. Miki and Nori have a very heartfelt talk and I continue to be in awe of how seriously this story takes its characters. Though we keep getting little tricks from Nori to win Yamada over you know that she understands she will probably never have him. I was fully expecting Nori to become the annoying one of the group but instead she’s become my favorite female cast member currently. 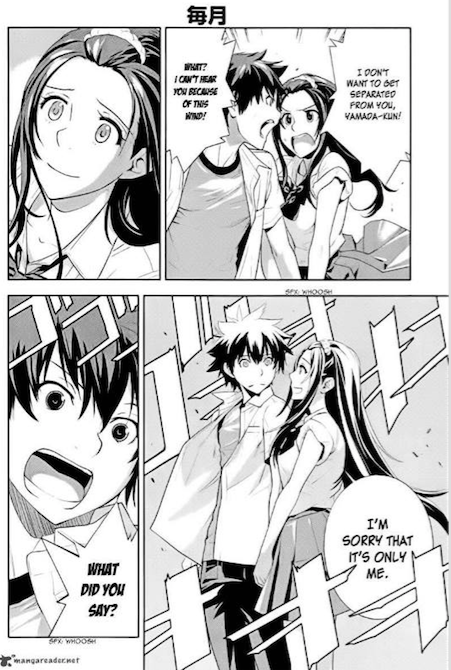 As the group splits up Nori and Yamada come face-to-face with Imaise and Miki reunites with Shibata. Talking about Miki’s reunion first off I wasn’t sure how to feel about Shibata at first as far as his relationship with Miki goes. I mean on the one hand he is her teacher, but also the way he acts is so mellow and unaffectionate you can almost sense that maybe he doesn’t love her. However in a few key panels, quiet moments too, Shibata drops his guard due to Okazaki’s masterstroke nature of his characters and proves in those few panels that without a doubt this is his girl. And I love that.

On the other end of that spectrum however I’m beginning to not know how to feel about Imaise currently. Once she picks up with the other two she immediately leaves to go find her sister. Before she leaves though she eggs Nori on to make a move on Yamada, and when she actually does Imaise is just shocked and abhorred. To make matters worse the very last panel in chapter 30.5 sees Imaise calling Yamada “the worst” for absolutely no reason, which is a trope among female anime/manga characters – usually tsundere and of which Imaise has shown very little signs of being in this series so I’m definitely concerned now for where Okazaki is planning to take her character.

While the time slip storyline may seem like it was an unneeded addition to the story once Yamada’s story catches up to his own time stream and things sort of start to mellow out I do think it was necessary to get these other characters in the narrative that are actually being helpful to the overall plot. And Nori, man, her heart to heart talks with Yamada are so mature, as well as we learn a lot about how observant she is.

All this time I’ve been letting the logic of Yamada’s feats slip by me simply because it’s manga, and there are just some stuff realistically these characters shouldn’t be able to do but in a fantasy world must do in order to propel the story forward. Like running around the island barefoot when he grew up in the city and his feet just aren’t use to the terrain. That’s forgivable stuff. But to my shock Nori points out all of these damn things that none of the characters, let alone myself as the reader, ever managed to think about as being impossible feats within the story. Leading to an even bigger mystery within the island that I am so eager to find out the answers to.

And finally we get the introduction of a mysterious masked character that seems to live on the island and has remained dormant until now. Unless they come from another timezone, we’ll find out, but I’m just so honestly curious to know what’s going on already. Although I’m very scared for Imaise’s character taking a major back peddle I do think this series is still going strong. I mean 30.5 chapters in and I continue to find little fault in the story says a lot about its quality.

If you haven’t checked out Let’s Lagoon yet, please do so. Now let’s just hope the next set of chapters I read don’t make me eat my own words. I didn’t mention the art which is still beautiful as ever and something Okazaki excels at is his character designs. Everyone emotes expression and has this kinetic energy thatpropels me through the story a lot faster than I thought I was going to. That makes me very happy.