The name of Jeff Lemire has become irrevocable entangled in all things comic book in the last decade.  From Dc’s New 52 to Sweet Tooth, Lemire’s work has long been the object of every praise and criticism that can be launched at a creator. 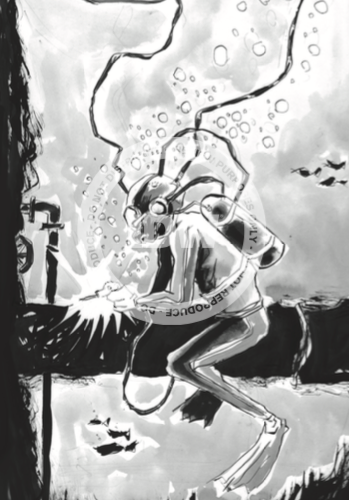 In 2012 Top Shelf released The Underwater Welder, Lemire’s complete creation from beginning to end.  It’s been extremely popular and often cited by by lcs as “one I should read”.  And I have.  The forward says it all, and when you can get Damon Lindelof to write the forward for your book…well…that sort of speaks for itself doesn’t it?

Welder is the story of Jack Joseph, a man who is 33 years old, the same age his father was when he vanished from his life.  His wife, Sarah, is about it have their first child, a boy, and Jack is heading out to the oil rig for one last job before the birth.  When he’s down below though, he comes upon something that rocks his fragile mind and sends him on an out of control path towards the truth.  About his father and himself. 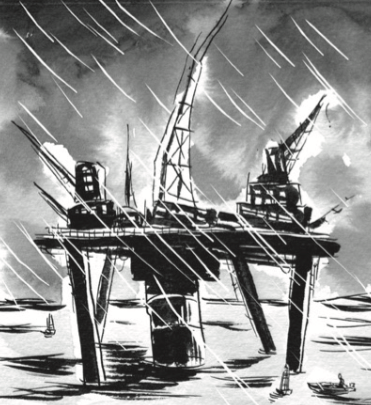 Lemire delves deep into fatherhood, what it means to both fathers and sons, and the discrepancy between the men they are and the men their children want them to be.  Jack is a man haunted by his past to the detriment of his future.  He’s in the midst of a crisis of personality.  He can’t find a future past what his father lived.  How can you go one when your role model vanished?  How can you be a father when you don’t have one?  These are big questions.  Lemire looks at how things could change in a very Serling-esque fashion that works perfectly for the context and feel of the story.

The art, also by Lemire, is all ink and ink wash.  It’s lovely, the grey colors adding to the Twilight Zone bent of the story, and because this took him 4 years to finish it, you can see the evolution of his art style throughout the book.  His line work becomes more refined, and he uses greater variation in the washes as he moves through the halfway point.  I love the fact that the washes stray through the edges of the panels.  The line work is great, frantic, and, weather he knew this at the time or not, helps to add to the desperation and anxiety that Jack is dealing with throughout the book.

Lemire keeps the theme strong in the story, and ends it as the best Zone tales did, in a “happy ending”.  The way it’s written makes you look at how your own fathering is going, and makes you yearn for more time with your dad, as well as better time with your kids.

The owner of my lcs was right, and now I’m charging you with reading The Underwater Welder by Jeff Lemire.  It’s the kind of book that’s filled with heart, and the kind that could change hearts through the reading.