The Truth is back, and its still out there in The X-Files #1, the new ongoing series from IDW Publishing. Thirteen years on from the original series run, The X-Files returned to television in 2016 in Fox’s spectacular events series from creator / executive producer Chris Carter. Now, along with the involvement of Chris Carter, IDW brings us a new comic book series by Joe Harris, Matthew Dow Smith, and Jordie Bellaire, which charts the continuing adventures of special FBI Agents Fox Mulder and Dana Scully.

Based on the phenomenally successful new Fox TV event series that aired earlier this year, The X-Files #1 reunites Mulder and Scully once more as their search for the truth continues. With the creative team that brought us IDW’s  The X-Files Season 11, writer Joe Harris, artist Matthew Dow Smith, and colorist Jordie Bellaire, on board, get ready to open the next exciting chapter of The X-Files in this new ongoing series which begins with a special 40 page debut issue featuring a stunning main cover by Menton 3 - and if that wasn’t enough there’s also a plethora of brilliant variant covers to choose from as well!

Having worked on the X-Files for years investigating cases deemed unsolvable or unexplained, FBI Agents Fox Mulder and Dana Scully eventually left the Bureau to carry on their lives in relative anonymity. Now, in the light of recent events, Mulder and Scully have returned to the FBI and continue their work on The X-Files.

The X-Files #1 gets this new ongoing series off to a great start. Writer Joe Harris throws us right into the thick of the action as a young gunman goes on the rampage in a shopping mall in Prince George’s  County, Maryland. But as the authorities close in to take out the shooter, events take a decidedly unexpected turn for the survivors of the massacre. “Active Shooter” sees Mulder and Scully called into the scene following the carnage in the fast food restaurant, but is this really the case of an employee going off the rails because he’s recently been jilted by his girlfriend, or is their something more sinister to this strange incident, and who is surreptitiously monitoring events from the sidelines as the Agents carry out their investigation?

Joe Harris skillfully introduces the series’ premise right from the outset, whether you are a long term fan of the X-Files or a newcomer, there’s certainly lots to enjoy here in what is essentially a very classic feeling X-Files story. Mulder and Scully are soon on the case, even though they are unsure why they’ve been assigned to it, and it’s not long before Mulder notices something unusual about the shooters firing pattern. This issue has plenty of “spooky” elements to hook us, the shooters girlfriend, who was also working at the burger counter at the time of the attack, is mysteriously unaccounted for, and the lone survivor of the shootout, a young mother and her baby, begins to act very strangely indeed, but it is the way the issue deftly infuses themes such as terrorism and gun crime into the narrative that effectively grounds the story and makes it so compelling and gripping. 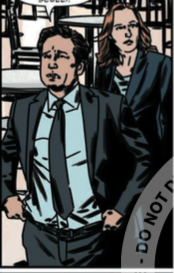 The X-Flies #1 is a terrific looking issue as well. Matthew Dow Smith’s artwork channels the look and tone of the TV show perfectly, with succinctly structured page layouts that effortlessly pull you into the story, and a brilliant attention to detail that is simply breathtaking. Even though events unfold in such an ordinary everyday setting Matthew Dow Smith makes every scene come alive on the page. Mulder and Scully’s likenesses, expressions, and mannerisms are all spot on, as are those of  AD Skinner, and believe me, Matthew Dow Smith gives us a classic Walter Skinner moment in this issue! Jordie Bellaire utilizes a rich palette of colors throughout the issue, with cool blue tones amplifying the mystery and tense atmosphere of the story at key moments, while deep shadows and gloomy hues punctuate the later scenes at the FBI offices. Yet it is the haunting, and seemingly infectious “holes in the sky”, that we can’t actually see which really highlights just how effectively Matthew Dow Smith’s artwork and Jordie Bellaire’s colors elevates the dark mood and atmosphere of this powerful storyline to a whole new level of sublime menace and intrigue.

This first issue builds towards an exciting close, when sudden danger strikes, leading to a tense stand-off, the resolution finds Mulder and Scully unsure about what they’ve inadvertently stumbled onto with this case, and in time-honored X-Files fashion we are left with the certainty that the truth is still out there. The X-Files #1 (2016) is a fantastic issue, with its innovative story by Joe Harris and impressive art by Matthew Dow Smith, this new IDW ongoing X-Files series will have you completely riveted from the first page as Mulder and Scully’s quest for the truth continues anew!

Paul Bowler is a self-Confessed Sci-Fi Geek, Doctor Who fan, and Zombie Disposal Expert. He likes movies, comic books, and all things PS3. He likes to write about his interests, would love to write a novel one day, and also enjoys chatting to the many people he has gotten to know on Twitter. When he’s not busy being an Impossible Astronaut, he likes to take a break from his adventures in time and space to enjoy some of his favorite tv shows and movies, preferably with a nice cuppa tea & a sandwich! You can follow him on Twitter @paul_bowler, or find him at his website, Sci-Fi Jubilee.