Special FBI Agent Fox Mulder unearths more clues in The X-Files #11 about the Cigarette Smoking Man’s and the now defunct Syndicate’s clandestine role during the Iran-Contra scandal. Mulder has been contacted by a man with links to his father’s past, someone who miraculously survived an execution ordered by the Smoking Man, but it wasn’t just an illegal arms deal that brought the CSM and Bill Mulder to Nicaragua in 1987. END_OF_DOCUMENT_TOKEN_TO_BE_REPLACED

It is the season of goodwill in the X-Files X-Mas Special 20116, where a spooky seasonal box of uncanny delights and intrigue await Mulder and Scully as they investigate a school holiday pageant that becomes a Christmassy extraterrestrial mystery. Mulder must face ghosts from the past, threats in the present day, and the unexplained truths of the future. Along with Scully, and a wealth of seasonal visitors, this is one Christmas that Mulder and Scully are never going to forget - so long as they survive Christmas Eve.
FBI Agents Mulder and Scully embark on a decidedly bizarre X-File this holiday season in this year’s X-Files X-Mas Special from IDW Publishing, written by Joe Harris, with art by Wayne Nichols, colors by Sebastian Cheng, and Executive Produced by Chris Carter. Yes, the X-Files brings its own unique spin on a Christmas Carol in this issue as mysteries both paranormal and extraterrestrial collide to bring Mulder and Scully the true spirit of Christmas! 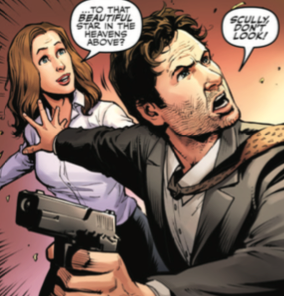 Christmas Eve falls over Washington DC as a mysterious force gathers, but is this manifestation making an assessment the people of Earth over the holiday season or just gathering intelligence about special FBI Agents Fox Mulder and Dana Scully? So, when a deluded Fox Mulder races to meet Scully at a children’s Christmas pageant, where events have already begun to take a bizarre turn, Scully and Mulder find themselves facing an inexplicable threat this Christmas that’s unlike anything they’ve encountered before.
From its dramatic scene setting and fourth wall breaking opening, writer Joe Harris ensures that the X-Files 2016 X-Mas Special is chock full of surprises and suspense in the truest X-Files tradition. After that uncanny start this special festive themed issue flashes back to events earlier in the day on Christmas Eve, where Mulder has accompanied Scully to a holiday market. But with Mulder acting all Ebenezer Scrooge, together with a fleeting glimpse of an ethereal figure Mulder believes could be his sister Samantha (who was abducted by aliens when they were children), the Christmas festivities begin to prove a bit too much for Mulder to stomach. 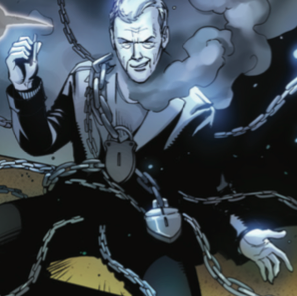 So, while Scully decides to accept Miss Holly’s invitation to attend a Christmas Pageant, Mulder retreats to his office back in FBI Headquarters, and it is here where this X-Mas Special really kicks into high gear. This issue features some great artwork by Wayne Nichols, especially in the sequences were Mulder is visited by the ghosts of Christmas past, present, and future, with Nichols brining a distinct X-Files twist on this classic tale as iconic X-Files characters and themes are deftly spliced and magically transformed as the story unfolds. I really liked how this aspect of The X-Files 2016 X-Mas Special explores the story of Samantha Mulder in a completely new and different way - and Nichols art, together with. Sebastian Cheng’s rich colors proves the perfect accompaniment to Joe Harris’ intricately plotted and emotional story.
Everything is resolved a little bit quickly at the end of the issue, but that’s just a minor point really, because the journey Mulder takes in this issue is at times actually quite moving, so it was nice to have everything get wrapped up neatly for a satisfying conclusion. The mysterious Miss Holly remains an enigma throughout, there’s even a kiss under the mistletoe, a wonderful closing scene between Mulder and Scully to enjoy, and as an X-tra special treat we also get a bonus sneak peak at The X-Files #10 (released January 2017).
From the moment you glimpse The X-Files 2016 X-Mas Special, with its brilliantly spooky looking Cigarette Smoking Man cover by Menton 3, and begin reading you’ll soon realize this is a very special and different kind of X-Files story. The tone is somewhat lighter for The X-Files than we are normally used to in IDW’s ongoing comic series, but it is Christmas after all, and you’ll soon find yourself swept along with this delightfully weird and wonderful Christmassy special form Joe Harris, Wayne Nichols, and Sebastian Cheng.

Following the success of the X-Files triumphant return in the Fox TV event series earlier this year, Special FBI Agents Fox Mulder and Dana Scully’s investigations into the unexplained continues in The X-Files #3, the all-new ongoing comic book series from IDW Publishing together with the participation of Chris Carter. END_OF_DOCUMENT_TOKEN_TO_BE_REPLACED

Spinning out from the recent Fox TV event series the adventures of iconic FBI Agents Mulder and Scully continue in the The X-Files #2, the brand new ongoing series from IDW Publishing with the participation of Chris Carter! Returning to the Bureau and the X-Files, FBI Agents Fox Mulder and Dana Scully have resumed their investigations into strange and unexplained cases. The X-Files #2 sends Mulder and Scully on their most challenging case so far, as two young siblings with a sinister power watching over them go on the run. END_OF_DOCUMENT_TOKEN_TO_BE_REPLACED

The Truth is back, and its still out there in The X-Files #1, the new ongoing series from IDW Publishing. Thirteen years on from the original series run, The X-Files returned to television in 2016 in Fox’s spectacular events series from creator / executive producer Chris Carter. Now, along with the involvement of Chris Carter, IDW brings us a new comic book series by Joe Harris, Matthew Dow Smith, and Jordie Bellaire, which charts the continuing adventures of special FBI Agents Fox Mulder and Dana Scully. END_OF_DOCUMENT_TOKEN_TO_BE_REPLACED

Mulder and Scully face the prospect of Gibson Praise’s master plan becoming a reality in The X-Files Season 11 #8, Endgames, Part 3 of (3), the truth shattering Season 11 finale of IDW Publishing’s thrilling comic book series. Scully has discovered Assistant Director Morales is in league with the faceless alien rebels, while in the Northern Utah desert Fox Mulder and Director Walter Skinner face the imminent threat of Gibson’s invasion, but with all the pieces now falling in place will Mulder and Scully be able to stop Gibson in time? END_OF_DOCUMENT_TOKEN_TO_BE_REPLACED

Prepare to believe in a whole new reality in IDW Publishing’s The X-Files Deviations, a world where fate took a very different path after the young Fox Mulder was mysteriously abducted by aliens in 1973 instead of his sister, Samantha, and never seen again. Now another Mulder has become the believer working at the FBI on the X-Files, Samantha Mulder, and despite the reservations of her skeptical new partner, Agent Dana Scully, Samantha won’t rest until she discovers the truth about what really happened to her brother. END_OF_DOCUMENT_TOKEN_TO_BE_REPLACED

Reunited at last, Mulder and Scully find themselves one step closer to the truth in The X-Files Season 11 #7, as we reach the penultimate issue of Season 11 in IDW’s excellent comic book series. With the help of the Lone Gunmen to decipher a clue provided by Gibson Praise, Mulder and Scully travelled to a top secret facility in Utah, and discover it was really a magnetite mining operation. As Gibson’s machinations unfold, the faceless alien rebels attack, and now Mulder must find out whatí’s happened to Scully. END_OF_DOCUMENT_TOKEN_TO_BE_REPLACED

Its time to trust no one and tape an X to your window as IDW’s outstanding X-Files comic book series builds towards Season 11’s startling finale! Mulder and Scully must confront the fact that Gibson Praise’s master plan could become a reality in The X-Files Season 11 #6, but how can they stop him, and will they choose to? Endgames, part 1 of (3) begins here, as Mulder and Scully face their greatest challenge since the X-Files began! END_OF_DOCUMENT_TOKEN_TO_BE_REPLACED

It is the season to be jolly, and this special season 11 tie-for IDW’s X-Files comic book series has arrived just in time for the holidays! The Lone Gunmen discover a bizarre clue that points towards the imminent arrival of unexpected visitors, but before they can react, the trio will get some more surprise guests for Christmas. END_OF_DOCUMENT_TOKEN_TO_BE_REPLACED

The X-Files Season 11 #3 continues to build on the IDW series all new status quo, with Fox Mulder’s ongoing quest to investigate the X-Files, despite his work being discredited and his current fugitive status. END_OF_DOCUMENT_TOKEN_TO_BE_REPLACED

A hauntingly strange and uncanny investigation awaits Scully and Mulder in this year’s X-Files 2015 Annual from IDW. Every year, on the anniversary of his sister’s abduction, Mulder attempts to solve the unexplained disappearance of child in order to bring peace to others. END_OF_DOCUMENT_TOKEN_TO_BE_REPLACED

“I want to believe…” For so long that was the mantra of the x-fanatic. The adventures of Mulder and Scully captured the imaginations of a generation, and Chris Carter most definitely changed the face of television, as we know it. END_OF_DOCUMENT_TOKEN_TO_BE_REPLACED

This Star Trek comic takes place after the events of Star Trek into Darkness, which makes it instantly comparable to comics like Smallville: Season 11 and X-Files Season 10 that take characters and events established on screen and continue telling that story in a different medium. END_OF_DOCUMENT_TOKEN_TO_BE_REPLACED

I have always been a fan of The Twilight Zone. It brings to mind cold winter evenings staying at my grandmother’s house, the smell of popcorn made in a pan on the stove with far more butter than was healthy for me, and so much salt that your lips would be chapped for days afterwards. END_OF_DOCUMENT_TOKEN_TO_BE_REPLACED

When I started this crazy thing called Bag & Bored I was looking for something to kill some time and have some fun with.  Nothing big, no readership - just silly meanderings on whatever comics I had read that week.  Consider my surprise that here we are over a year later and with quite a cast of reviewers and writers on our team.  One of the major pay-offs with this site has been END_OF_DOCUMENT_TOKEN_TO_BE_REPLACED

I arrived at the Baltimore Convention Center prepared for the second day of Comic-Con completely solo. My comic book compatriots had abandoned me opting for END_OF_DOCUMENT_TOKEN_TO_BE_REPLACED

Comics based on films, television, and video games have really filled the market in the past decade or so, from “Buffy the Vampire Slayer”, many “Army of Darkness” spin-offs, and even a “Mass Effect” list of titles.  There are more, but I think you get the point. END_OF_DOCUMENT_TOKEN_TO_BE_REPLACED