Review: By the time you read this review you will probably have not only seen Captain America: Civil War but also seen the next episode in the season which follows Civil War. While as of this writing I haven’t seen the latest episode, I have seen Civil War and while I would like to say things like “I kind of wonder if the movie will reference this season at all,” and “I know this doesn’t set up the film at all but I am curious to watch this and then watch the film and see exactly how things line up,” all the while those lines are hiding behind both naivete and longing for a true cinematic connection while know full well we won’t get one… I can’t.

Because I know exactly how everything plays out minus having not seen ep. 20, Emancipation yet. In short, I’m writing this review really, really late because I’ve been really, really busy. Please bare with me.

This was a fantastic effing episode. Like seriously. It wasn’t perfect, that’s a statement thrown out a lot because the truth is nothing is ever perfect, but I still really enjoyed the heck out of this episode. I really enjoyed seeing Hive’s origin story and the show fully embracing its sci-fi connections and truly odd history with this episode once it fully integrated that flashback scene of Hive as a hunter being taken by the Kree. And then later bringing those same Kree Reapers back for an all-out brawl with Hive and his ragtag team of merry mutan—Inhumans.

Sure, the Kree were really underdeveloped in terms of character and importance to the plot – I mean, really, the Inhumans going completely unnoticed to the Avengers (that we know of) is one thing but a couple of space ships crashing down on the planet should at the very least raise some red flags for one Mr. Tony Stark. But I digress, it’s a minor annoyance because I would like the movies to at least acknowledge that these events are going on even in passing. Not that I really need to see Agents of SHIELD constantly pigging backing off of each Marvel film that gets released. I’ve said in the past I feel we’re truly past that novelty.

The Kree’s main addition to the storyline is really only to give us some awesome Kree fighting scenes, one really awesome fight scene with Hive, and to allow Hive to get his long awaited revenge. They tried draining blood from the Kree but since that failed that function of theirs in the story also ultimately failed. While it is a bit underwhelming when you think about it, I still liked their additions to the story and again I’m wholly glad this series is fully embracing its sci-fi connections. It’s no longer afraid to be a comic book TV show.

On the subject of everything else, I do feel the few other Inhumans on Hive’s team were quite underutilized this episode minus Daisy. Who really got to shine. I’m not going to miss Whitley, the Inhuman who could multiply herself simply because she only popped up here and there and really didn’t have much character to her. And while I enjoyed the banter between May and James in the pool haul I also would like to see the guy do more now that his powers have been awakened. I think we’ll get that next episode, but kind of seeing these guys pushed to the wayside this time around was a little disappointing. 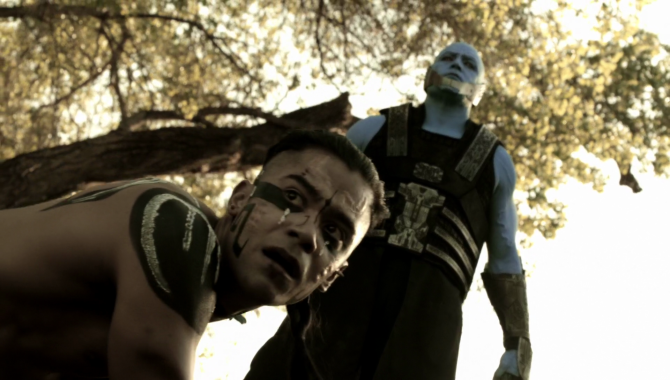 On the SHIELD side of things it felt a bit out of place at first since we very rarely get dialogue from the random agents that aren’t our main characters, I was very happy to see two agents get not only quite a bit of screen time but also actual dialogue and full sentences and badass moments to boot while tagging along with May and Mack. It’s one of those things that makes this organization feel like an organization and not just a small team of misfit toys.

And speaking of misfit toys, Daisy’s speech to Mack and the eventual near death beat down she gave truly had my eyes watering. I care for Daisy, and I really care for her deep friendship with Mack and seeing her lay it all out to him as to why she doesn’t work with him or anyone else was a heart-breaking moment for me. And honestly I really did think for a split-second that the show was going to fake us all out and end up killing off two characters by season’s end. I think it would have been truly fascinating if they had.

There was so much I enjoyed about this episode that the minuscule things are only that. Miniscule. And I’m happy about that because with only 3 episodes left to go (as per this writing) it’s awesome seeing this season remain so strong through its back half since returning from its winter break. Also, yes I caught the Civil War reference Hive gave during the episode. I actually thought it felt organic for Hive to say in context to the story while keeping the rest of the episode free to tell its own thing.

Now onto the next episode.