Story and Art by Kentarou Itani

Summary: Takuan is your average, everyday boy who desperately just wants to live an average, everyday life. To the point of which he will lecture often to one of his few friends about the importance of simple minded peace in simple minded things. That’s not a bad philosophy to live up to, but a philosophy the cosmos don’t seem to be willing to allow him to live. One day when Takuan meets Batsu, King Enma’s only daughter, his life begins to become much more entertaining…

[MAJOR SPOILERS from this point on…]

Getting a Jump Start on new serials coming out, I felt like I would give this fun looking series a shot after seeing it advertised in the back of last week’s Shonen Jump issue (of which Boruto made his premiere). This is one of Shonen Jump’s “Jump Start” series in which the magazine runs a limited number of chapters of a new series and let reader’s vote on whether to keep that series.

For Daily Demon Diary (DDD for short) this means we’ll get the first 3 chapters in both English and Japanese before its fate is ultimately decided. Now that Shonen Jump is simul-publishing in both countries. I hope this review not only helps you all check out the manga but also help you vote to keep it publishing. Because dang what a great opening chapter.

Chapter 1 does a lot and makes it all work. There are some bumps, but not enough to make me enjoy it less. Takuan is a very interesting main character. I wasn’t sure how I was going to like him just at first when he started spouting about the pleasures of everyday life – I thought he might turn out to be a really boring lead. No I was pleasantly surprised, this boy is full of fervor for life and expression. He’s responsive to both dire situations and especially comedic situations. Which this story is full of.

By the end of the first chapter we fully understand as the reader why he feels the way he does about everyday life and it’s actually quite heartbreaking. I’ll try not to spoil it but Takuan becomes more interesting as a character by this revelation because it includes loss and the fact that he doesn’t allow that loss to stop him from living his life and instead it props him up to appreciate his life more.

There’s another revelation at the end of the chapter about Takuan aside from that that also adds depth to his character but I’ll discuss it in a bit after we talk a bit about Batsu.

Batsu, King Enma’s only daughter like to remind us of that fact a lot. As long as it doesn’t happen much anymore past this chapter – I could see it happening in certain instances meeting new characters, or as an introductory page for new readers – I won’t consider it annoying. This tick she has though is only extension of her truly outstanding outlook on etiquette and the concept of “eye for an eye.” 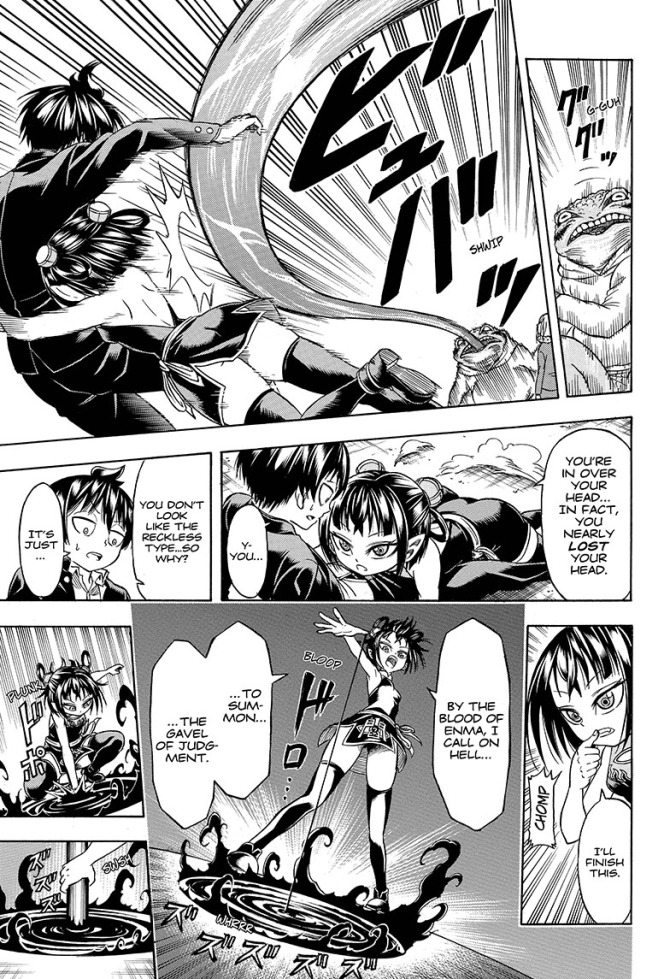 When Batsu commits an indecent or informal act she feels the need to keep the balance by allowing that same thing be done to her, or vice versa if something happens to her. Examples include her accidentally headbutting Takuan in the crotch and then pestering him to headbutt her in the crotch in order to keep balance, and when Takuan accidentally sees up her skirt she pulls down his pants to see his underwear. – All used for relevant and fitting comedic effect and not juvenile ecchi humor.

It’s this sense of balance that helps define Batsu who’s being forced to take up her father’s work as judge and jury of the afterlife. Enma, based off the mythological deity Yama, essentially weighs the actions an individual committed in life and punishes them justly in hell. In Dragon Ball Z he decides if someone goes to hell or heaven, which doesn’t seem to be a far off concept from what’s going on here.

It’s all about balance and Batsu is the only one left in her realm to keep it. Yeah, she can take it to an extreme but again its used excellently for comedic effect throughout the chapter. I also really enjoy her Enma Blood magic that she uses in order to fight and summon her weapon, which is basically a giant mallet that can do all sorts of things.

The main reason she is on Earth however is to find demons who have attached themselves to vile humans who are terrorizing everyday life. In the first chapter we get a grotesque and also awesome looking Frog man who’s attacking civilians. When Takuan and Batsu witness a police officer being attacked they attempt to stop him but at first fail. Getting the woman police officer’s I.D. That was left behind Takuan gets the idea to go to a Detective he knows in order help catch  the Frog man.

There is a few big twists that this leads to and a pretty awesome battle between Batsu and the Frog man. But not before we get the revelation that Takuan is also a demon, possessed by an ogre who he is actively trying to keep dormant by enjoying everyday life and keeping himself calm and happy. Tied to an earlier, awful experience in his life it’s important that Takuan keep in mind what makes him happy so that his malice doesn’t overtake him like the demons Batsu is out to punish.

DDD is a fun, fresh series with a lot of great comedy, interesting and three-dimensional character, awesome action and a really fun concept. Itani’s art is super interesting and I’m really digging its flat-faced but poppy-action style.

I personally want to see this series continue and I hope it’s not just 3 chapters that get to review in total when all this is said and done. Go check out Takuan and Batsu’s Daily Demon Diary and vote for your support to keep the series going in one of Shonen Jump’s surveys!

Final Score: 4.5 Bludgeoning Mallets out of 5