The Wicked and The Divine Volumes 1 and 2

The Binge is just that. It has become almost standard practice to binge watch or read media. From television to comics, the advent of digital media makes it easy to gorge yourself on whatever you choose. From six seasons of The Sopranos to a hundred and some odd issues of The Walking Dead, you can read or watch as much as you want, as fast as you can get it in your brain.

This week on The Binge I’m featuring the first two volumes of The Wicked and The Divine from Image Comics.

Preconceived Notions: As far as this series goes, I had very few. I’d heard that it was a staple on pull lists, and Kieron Gillen certainly has become one of the go-to writers over the last five years or so. As an artist, I’m completely horrible with remembering most artists names, I often see their work and say, hey, wasn’t that the artist who drew such-and-such, but names escape me. (Thank you Internet.) Jamie McKelvie ahs also had great success on books like Ms. Marvel and his own creations Suburban Glamour and Phonogram.

Diving in to the Divine-

I read through the two volumes of The Wicked and The Divine that are available, (Volume 2 released last week) in about three days. Both trades are, with the extra stuff at the back, variant covers etc., around 200 pages.

Volume 1 sets up the premise and takes us through the first big shakeup to the story. The long and short of it is this. Every 90 years gods return to Earth and live with us for two years, at which time they die and must wait another 90 years. The Pantheon has returned and they have taken on the roles of pop stars, playing to huge audiences, adoring fans, groupies, acolytes…they are worshiped. Laura is an early-adopter, a Pantheon hipster, a young woman who is lost and confused and looking for answers. She is a typecast teenager. Lucifer, one of the Pantheon, is accused of killing a judge, and Laura befriends her, a go-between between her and the rest of the Gods, who seem to have abandoned her. The trade ends with the death of Lucifer at the hands of another God, though it’s a mystery who did it.

The hook here is that the gods are just kids, and that the absolute power they’re given is intoxicating. All of the regular people wish that they were one of the Pantheon, and through Lucifer, Laura is given the change to live like them. These are Gods as pop-icons, and the premise may have a root in reality, where young kids are given enough money to do whatever they want. Gillen places the caveat on the story that the only ones to police the gods are the gods themselves, and in the end, the boss is Ananke, the only “old” god of the group, who finds them as they’re reborn and guides them to the spotlight.

The story is dense. Based on Laura and her experiences with Lucifer, the first four issues may seem slow, but when the action happens in issue five, its an amazing a perfect ending to the first act. 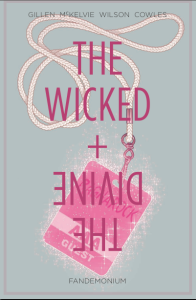 Volume 2 begins with Laura’s exploration of her own powers. Right after Lucifer is killed in the first volume, Laura lights a cigarette by snapping her fingers, a very Lucifer-esque gesture.

Is she a god? Who killed Lucifer? These are the two questions that occupy the majority of the second volume. We get in-depth with more of the interpersonal relationships between the gods, and less of the outside clamor that was necessary in the first volume to build a context for the way the public viewed the Pantheon.

Laura Wilson is still a confused 17 year old, and now, on top of all that teen anxiety, she may be a god who will die in two years. She has an insider willing to help her, Inanna, one of the gods and an idol of hers. Together they try to unwind the mystery.

Bottom line, despite their great power, infinite knowledge, these are still just kids, and kids who’ve been told that they’re going to die. The issue ends in a way that will ruin it for you if I tell you. Suffice to say that if the series ended here, it would be crushing and perfect at the same time. Otherwise, it’s a great ending to the second volume.

Overall Thoughts on the Divinity of the Wicked –

This is an interesting story. It takes the questions of wickedness and divinity in a new direction, dropping those qualities that seem to only apply to gods and goddesses and bringing them home to a populace that yearns for a clear delineation between the two. Gillen is playing with heavy dice, and I feel like reading this in “binge” fashion was helpful in getting into the meat of the story without having to reread back issues.

Jamie McKelvie’s art is beautiful, very slick and modern looking. Add in Matthew Wilson’s colors and you end up with a sleek book. McKelvie’s character designs are great. I love Lucifer’s Bowie-esque look, and the individual designs for the gods fit perfectly with the theme.

Binging media is not always the way it’s meant to be consumed. The act of overloading your brain on one thing changes the dynamic in which it is digested. I found that the binge of The Wicked and The Divine ended with me focused more on the words and less on the art than I would have been if I’d read it monthly. (I think) Furthermore, if I’d read as it was released, and been forced to reread issues to remember what was going on, the focus would have drawn away from the story and back into the art a little. Either way, The Wicked and The Divine is worth your attention, an original idea wrapped in a beautifully drawn package.

Brad Gischia is a writer and artist living in the Upper Peninsula of Michigan. He is married and has three kids and a dog, all who put up with his incessant prattling about comic books.