Review: I actually had Goodnight Punpun, or how you’ll most likely discover it through its actual Japanese name Oyasumi Punpun, referred to me by a couple of good friends. They touted it up as a powerful and fun series with the humorous twist of how Punpun looks compared to everyone else. I decided to give it a shot and found their opinions to be pretty sound.

When you get into Punpun, you may find it silly at first and may find it hard to take such a story with such a funny looking main character serious, but stick with it because by the end of chapter one the world of Punpun opens up and you’re left with a heavy does of reality that will definitely keep you coming back for more. You’ll also notice how Punpun’s cartoonish design contrasts drastically with the ultra detailed landscape and characters that surround him. This is on purpose, and we’ll discuss that more in detail a little later.

Volume 1 of this already completed series covers the first 12 chapters, all of which are told at around 17-21 pages per chapter. Pretty standard manga chapter length, but Inio makes great use of his chapter length; where as some manga-ka would take up this space to highlight a single fight scene, or maybe a flashback scene, nothing that really moves the story forward, Inio makes each chapter feel whole and important to Punpun’s life. Sure, the chapters usually end on cliffhangers but a lot happens in each chapter before we get to that point. It’s refreshing.

Goodnight Punpun’s first volume sees Punpun falling in love, learning all about the human body, learning about his connection with God, and having to deal with some of the random, everyday events that life throws at us. Everything is a little exaggerated in an otherwise seemingly normal world, with characters being drawn in overly exasperated expressions at times and acting in sometimes overly exaggerated ways. It’s fun, quirky, and keeps the series interesting during the more normal scenes.

I love how innocent Punpun is, when he sees a vagina for the first time his reaction is that it’s a monster and the vagina is a hideous face. Yet, he sees a pretty girl that releases the endorphins in him for the first time and that face sticks with him forever. It’s such a realistic take on how it goes growing up, at least for some kids, and it’s a good example of how much growing up he has to do. Punpun also wears his heart on his sleeve, and whereas a lot of main characters can go en entire series without the ability to confess to a girl that they like her, Punpun does it right out of the gate and moves the story along tremendously. Like, wow, Punpun you’re great. 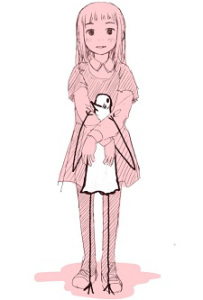 His supporting cast isn’t nearly as innocent. They are kids though, so they still act like kids. And the supporting cast is given so much room for growth and moments for us to either care about them or hate them. We get to know about a lot of the kids Punpun surrounds himself with, as well some of the adults. And for most manga-ka, 12 chapters would be nearly impossible for them to put the spotlight on all these kids, but this is life as it happens and Inio makes the most of his space. Thankfully, all our characters have flaws and aren’t 1-dimensional so it helps keep the story interesting and also helps keep you on your toes. The biggest thing in all of this that I actually disliked concerning the first volume is that there are unfortunately a few detracting subplots that don’t do anything for the story and feel like wasted space at the end of the day. One in particular that I recall is where the Principal and Vice-Principal of Punpun’s school decide to play hide-and-seek and it’s meant to be something funny, but I personally found it to be pretty stupid.

Harking back on that dose of reality comment I made earlier, there’s a special uniqueness to Punpun put on display within’ these pages that’s more than just how our titular character and his family looks to the viewer. Punpun doesn’t pull back its punches when it decides to inflict serious life events upon our main characters, and the only thing that tethers our characters back from the brink of depression is that Punpun, and his friends, are kids, and Punpun most of all is innocent and is still growing up. He doesn’t see the world in the same way as everyone else, and that holds the most true in not only how he reacts to serious situations, but also in how he sees himself in accordance to the world around him. 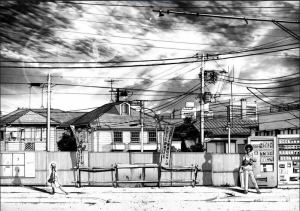 Like I mentioned before, Punpun is an anthropomorphic bird, his family is a bunch of anthropomorphic birds, but everyone else in this world are normal. The landscapes are normal, although highly detailed, and everything is more or less normal. This is deliberate and meant to be a slight of hand on Inio’s part. Punpun isn’t actually a bird, but Inio works his magic and makes you truly believe that he is. Why? Well, it’s an interesting thing; all of us see ourselves as different and unique to everyone else in the world. Of course we don’t see ourselves as birds, but all of us – especially growing up – spend much of our time believing that our family is just a little special, and we ourselves are as well. Not special as entitled, but no one deals with the world like we do. And part of growing up is realizing that we exist in this world along with everyone else, we all – while still unique – also share similarities in our lives and face our fair share of problems. We’re not alone. And neither is Punpun.

At least, that’s my take on Inio’s intentions. If I’m wrong, I’ll correct myself in later reviews. Until then, I feel Punpun’s journey as a character is to grow up and grow out of his innocent shell one feather at a time, and like all of us, blossom from an anthropomorphic bird into a fully realized human being.