Review: After what I felt was a solid, if murky in a few places opening first volume, the world of Punpun really opens up and delivers a wonderfully resounding and emotional second volume that leaves you crying by the end. 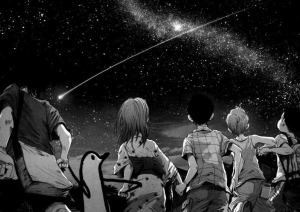 If Inio made you feel for Punpun in the previous volume, here he makes you become him. Punpun is still his sweet, innocent self who doesn’t fully understand the way the world works. Until everything starts falling into place once he reaches a near death experience. Punpun simply can’t catch a break, but it isn’t one of those stories where you simply hate everyone around Punpun for making his life hell. Each character has their own problems they’re dealing with, and unfortunately Punpun gets caught in the middle of their actions whether they mean for it to happen or not.

By the end there’s only one character I’m raging at and it’s the character Aiko. I get that she doesn’t like people ”lying to her” or letting her down, but if Punpun had just explained the situation of why he was unable to meet her at their designated spot, and perhaps had she even given the chance to tell her why, they would still – I would hope – be talking by the end of the volume.

But while the Aiko storyline takes a bit of a tumble by the end of the volume, there’s one story that ends up taking up a good chunk of the chapters here and that’s the situation involving Punpun’s family. Introduced in the first chapter, but having taken a back seat in volume one in terms of drama, Inio really brings it to the forefront and makes you feel for his father, mother, uncle, and Punpun as they struggle to get their lives back together, albeit not actually together.

No, the tale of the Punyama’s is a little different in that it portrays more realistic occurrences. There seems to be no happy ending for this family, and so everyone ends up going his or her separate ways. Punpun gets a new last name, as his uncle effectively adopts him, and what occurs is one of the most heartbreaking chapters I’ve read from a story in a long, long time.

This volume also sets up an even more interesting status quo that we’ll obviously be exploring more in the next book, as by the end of the volume there is a 2 year time skip. And it seems a lot has changed. I’m really, really interested to see where things go from here, and I’m curious to see how far into Punpun’s life we get to experience.

I also like that Punpun, for being the weak, frail character he is, has genuine friends who like him. Not “friends” who pretend to do so and then badmouth him behind his back. It’s really, rather refreshing. When it seemed liked Punpun and Aiko were about to die in an explosive fire their friends tried their damndest to save them, not out of terror of “getting into trouble” or running away and saying “no one will blame us” or something like that, they showed genuine concern and, man, it’s nice seeing characters be legitimate friends with one another in this series.

What makes volume 2 better than the previous one is that Inio really begins getting the voices for his characters out there. Where as volume 1 felt like him getting his sea legs, this is where the characters shine. I’m all aboard the Punpun train, and I suggest you get on as well. The tickets are free, and the feels are real. It’s gonna be a depressing, but fun ride.