For those of you who didn’t read The Strange Talent of Luther Strode or The Legend of Luther Strode when they came out in 2011 and 2013 respectively, this is a great time to pick up the trade and catch up. Justin Jordan’s first foray into the weird world of Luther Strode was the embodiment of those old Charles Atlas ads in comics. Luther was the geek who got muscles, and a penchant for punching peoples’ heads in, who didn’t have to bow to the jocks in school anymore. He became a vigilante and received all of the praise and danger that that job entailed. 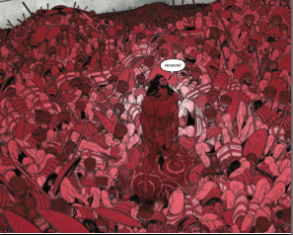 Just out from Image Comics this week was The Legacy of Luther Strode. This is the final Luther story, though Jordan hints that there could be more coming from the “Strode-verse” in the future.

Strode is a character steeping in mythology, proven and tested in the first couple of pages, and those first pages also hint to what could eventually be Luther’s ending. That aside, this is another fantastic, action-packed chapter to the Strode story from Justin Jordan. Here Luther and Petra are on the run from the final events of The Legend of Luther Strode, and they escape in fantastic Strode fashion, throwing doors and breaking through steel plate as easily as I tear through a peanut buttered piece of Wonder Bread. New threats appear and perhaps new allies, but we’ll have to wait to see where this is going as the series progresses.

The art in this book is top notch. Tradd Moore’s style has major influences in manga and DragonBall Z, and I see him doing things that are anime influenced as well, such as the ripple effect seen here. I don’t know that I’ve ever seen it used in a comic and it looks spectacular. (In my defense, I’ve not read much manga, and it may be a staple there.) The advantage of this style is the opportunity to create really exaggerated features without it feeling forced, and in turn you can get some great feeling from the characters. The evil looks seem really evil, while the happy looks (which are also sometimes the evil looks) are just that much more happy.

Felipe Sobreiro’s colors also serve to make the pages really stand out from others on the shelf. Rather than go with the often-muted coloring of many of the “gritty” comics out there, Sobreiro decides to blast your eye sockets with bright and vibrant colors. Not to worry, it’s not like watching a Rainbow Bright cartoon, the colors do make sense, but they don’t fall into themselves in the process of trying to keep the book serious. The world of Luther Strode is as bright and sharply contrasted as our world, and it shows in Sobreiro’s coloring.

This is the beginning of the end for Luther Strode, and I’m on board. The combination of Justin Jordan and Tradd Moore hasn’t failed to impress in the past, and it continues to do so in The Legacy of Luther Strode #1.