“Captivity turns to Competition” or so Telos promises in issue #1 of DC’s huge Convergence event. Coming just one week after the set-up laden zero issue, the first chapter of the event begins in very much the same manner, with a slow methodical pace and lots of necessary exposition and back story. I say necessary because Convergence is certainly firmly rooted in continuity and as such is predicated upon a working knowledge (at the very least) of DCU lore and history. That is not to say the narrative is cumbersome, needlessly complicated or convoluted, nothing could be less accurate; in fact Convergence is a continuity nerd’s (I count myself among this sub-class of comic book fan) dream come true. Co-writers Jeff King and Scott Lobdell shift the focus from last issue’s New 52 Superman facing the menacing Brainiac to the Earth 2 heroes as they encounter an equally sinister Telos standing in as the personification of Brainiac’s world consisting of the culmination of 40 bottle cities. 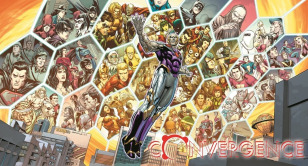 As the narrative begins we learn the fate of the Earth 2 heroes and how they came to be relevant in the Convergence event; although much of Convergence takes place completely isolated from any current on-going DC story arcs, the inclusion of the Earth 2 elements, particularly the tumultuous twosome of Earth 2 Batman and Dick Grayson, may make the complex and continuity heavy plot more attractive to newer readers. Elements from the video game spawned, Injustice: Gods among Us also make a brief appearance as one of the 40 combatants in Telos’ violent scheme providing a similar inroads for fans of more recent DC fare.

King and Lobdell rely heavily on Telos to pull the reader into the complex plot through his hyper-detailed exposition. Much of what is to come is set forth as Telos’ expounds and expands upon his Master’s ultimate plan, the fact that Telos is actually the embodiment of a planet in flesh and blood is what makes these scenes so poignant and engrossing, much more so than if Brainiac were to simply run it down for us himself. The issue lives and breathes in the dialogue between Telos and the heroes chosen to participate in this brutal competition that is at the core of the plot, 40 cities enter the combat arena but only one will survive as the ultimate victor of Convergence. If that’s not exciting I don’t know what is my friend. 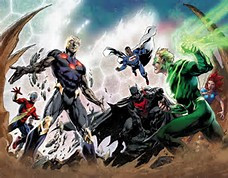 Visually, Carlo Pagulayan sets the stage right from the start with his depiction of Injustice’s Gotham in ruin. He meticulously captures the despair and destruction that awaits each of the cities unfortunate enough to fall in this chaotic contest. Pagulayan makes extremely effective use of double page spreads and splash pages to dramatically accentuate the action. Jason Paz further energizes Pagulayan’s dynamic character designs and painstakingly detailed settings with his precision inking; while Peter Steigwald and Jason Starr’s colors bring the entire shooting match to electrified life. The double page spread depicting Telos floating across a background of the various DC Universes represented here is particularly enhanced by the contrasting color choices; Telos is vibrant and sharp against the more subdued tones of the background characters arranged in a hive-like series of honey combed panels. This is just one visual highlight in this issue full of stunning artwork.

Overall this first issue picks up on the foundation building zero issue and continues to craft a narrative that in equal parts pays homage to DC’s illustrious past while gazing at the future, built upon continuity as much as innovation and imagination. Now that the course has been plotted I can’t wait to take the journey, I suggest you climb aboard. (4/5)