Greetings and salutations True Believers and welcome to the first in a series of articles that will focus on the major changes coming in the near future for our beloved Marvel Universe. Major is perhaps not a strong enough adjective to describe the changes that were announced by House of Idea big wigs Tom Brevoort and Axel Alonso at a press conference held in Manhattan’s Midtown Comics last week. The two Marvel execs touched on the details of the huge Secret Wars crossover event that is all set to officially kick off in May on Free Comic Book Day 2015 with a special #0 issue which will include a “primer” introductory story as well as a translated version of the Avengers/Attack on Titan crossover, an eight issue Secret Wars mini-series written by Jonathan Hickman with art by Esad Ribic will follow. The seeds of Hickman’s Secret Wars story have been germinating ever since Hickman took over the Avengers and New Avengers titles back in 2012; however the plot has been deepening recently with the further development of “the incursion” which is a cosmic event that will bring about the combining of the Marvel 616 Universe and the Ultimate Universe. In a tip of the hat to the 1980’s Secret Wars, the resulting amalgamation will then be known as “Battleworld”. Brevoort and Alonso referred to the process as two pizzas being slammed together and the toppings of each combining in a way that will be pleasing to some and infuriating to others as some characters and concepts will fall away while others will remain henceforth as part of the canonical Marvel Universe.

To those of us who have been following these characters for a good part of our lives this amounts to a complete reboot, or at the very least a major overhaul of a narrative that has lasted 75 years and become a cherished piece of popular culture. However, the official Marvel line is that this is not a reboot merely the state of the Marvel Universe going forward. This casts an extremely long shadow over the launch of any new series going into this status quo altering event for such characters as Spider-Gwen, Inhumans and Hawkeye to name just a few slated to hit the racks in this tumultuous time. The questions it raises for existing titles are just as numerous; most importantly which ones will be around when the dust settles after the Incursion and resulting Secret Wars and will they be recognizable.

While most of us struggle to get our brains around the first salvo of Earth shattering revelations, Marvel announces the three types of tie-ins that are designed to further expand this All New Marvel Universe. 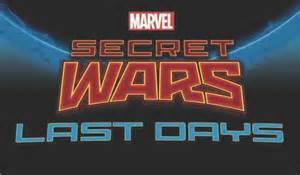 First there will be the Secret Wars: Last Days tie-ins which are set in the final days leading up to the Secret Wars and focusing on exactly what the Marvel characters are doing and how they are being affected at this pivotal time. Axel Alonso explains it like this; “What would you do if you learned today was your last day on Earth? That the question your favorite Marvel heroes are going to ask themselves in their Last Days story lines as they brace for Secret Wars and the end of the Marvel Universe.” 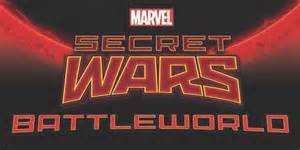 Next up is the Secret Wars: Battleworld series which will consist of stories set in the various countries that make up the Battleworld terrain as depicted in the interactive map released earlier last week. Alonso said in explanation; “If you want the full story of what’s happening across the surface of this new planet, Battleworld branded titles are for you, who polices Battleworld? How do the various domains interact? What happens when those domains go to war? What strange, never-before-seen creatures inhabit this world? What familiar faces will make appearances? Fans who want to fully understand how each sector interacts with the others can’t miss out on these books!” 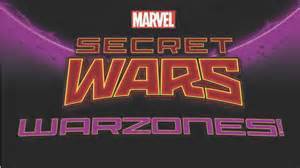 The third and final (?) of these tie-in series will be Secret Wars: Warzones. These stories will deal primarily with the future of the Marvel Universe as it unfolds as well as the politics of this complex world as they pertain to the individual nations of Battleworld. Alonso said of this series; “If you want a glimpse of what the future holds, you’ll find it in the Warzones titles. Our creators let their imaginations run wild as they lay down the foundations of the future. Whether we are revisiting the most popular events from Marvel’s past or telling completely new stories, you won’t believe what we’ve got in store for you.”

The main point that I took away from what Brevoort and Alonso have said thus far in shedding light on this massive Secret Wars undertaking is that every story ever told in the Marvel Universe or in any Marvel Universe for that matter, along any alternate timeline or in any obscure corner of the cosmic universe now “has legs” by this I think they mean that, for example Old Man Logan and Patch could now exist side by side in the All New post Secret Wars Marvel Universe. This certainly presents some very intriguing story ideas but is it enough to sustain the Marvel Universe as a mythology and provide fully actualized and developed characters in an ongoing narrative from here on out, that remains to be seen. So if you are interested in the details and developments that are going to define our beloved Marvel Universe going into the future please be sure to join me here at Bag and Bored, True Believers as I endeavor to bring you the latest and the greatest of all things Marvel, up to and including Secret Wars and all the fallout from this senses shattering event, until next time, Excelsior!