Brian Visaggio isn’t afraid to take the bull by the horns, or in this case, the comic by the panels. His current project, Andrew Jackson in Space, is on KickStarter right now, and only two weeks remain on this funding drive. Brian was good enough to answer a few questions for us on AJiS, as well as the process of KickStarting an independent comic book.

What have you published up to this point?  What is the status of those books now?  (Any ongoing?)

I’ve put out five issues of my ongoing series Stronghold, which has been running since last year, and issue 6 is wrapping right now. It’s projected to run twelve issues. I actually just finished my first draft on issue 8. All five released issues are available on Amazon and Comixology.

What are your inspirations inside/outside of comics?

Inside comics, obviously Watchmen and Sandman. Stronghold in particular took a lot from Brian Woods’ DMZ, and I’ve always had an enormous love for Marvels and Kingdom Come. More recently, I’ve been reading more broadly; I love Charles Soule and Fred Van Lente, and pay a lot of attention to how they write. Soule’s She-Hulk and Kurtis Wiebe’s Rat Queens have been pretty big influences on Andrew Jackson in Space.

Outside comics, my biggest influences as a writer are harder to pin down. Probably everything I consume influences me, and this becomes a harder question to answer without it simply being a list of things I like. Stronghold draws a lot from Ron Moore’s Battlestar Galactica, and honestly, Ron Moore has been without a doubt an enormous influence on how I think about storytelling, alongside Bryan Fuller. Moore has a very moody approach to science fiction that places a great weight on human interactions and competing philosophies. I know its not a popular position to take considering the crap that’s been coming out of his mouth lately, but Orson Card’s work, especially the original Ender books, the Tales of Alvin Maker, and Pastwatch; he’s a writer who takes ethics and interrelationality seriously. Kim Stanley Robinson. The Adventures of Pete and Pete. The myth of Persephone. And I tend to play around a good deal with Biblical imagery.

I also can’t downplay the influences of Elizabeth Anscombe, John Rawls, and especially Sören Kierkegaard; I have a hard time avoiding existential themes, although I try to downplay it.

What is your process when creating a book?

I start with a list of plot points, themes, scenes, or lines I want to use — I call this my “things to accomplish” list. From there I hash out a rough plot — basically a list of scenes with a very short description, which I rearrange and edit a ton. This is where I structure the story. When that’s done, I’ll flesh out each scene in some detail, and then take that outline and do page-by-page breakdowns, which will include some dialogue, some paneling ideas, and page turns. Only after that’s been thoroughly workshopped will I write a proper script draft, which is the easier part of the entire endeavor; it’s mostly formatting of existing material. Then we workshop that until it’s ready.

-On Andrew Jackson in Space –

-Your latest project is called Andrew Jackson in Space.  The basis for the story is obvious.  What was your inspiration for launching our seventh president into the far reaches?

I was developing a Twilight Zone-style sci fi anthology series focused on American history called America Fantastica, but it didn’t develop the way I want it. I culled from a list of plot seeds I’d written for it the phrase “Andrew Jackson vs. Robots,” because it seemed like it’d be a fun thing to play with. 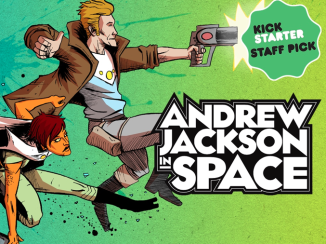 Was there ever a different president in mind for this book?  (Tell the truth…was it the hair that pushed Jackson through to the finish line?)

No, it was always Jackson.

Is this a stand-alone book, or is there further adventure for Pres. Jackson?

This is the first issue of a projected four-issue story. I have more in mind, but right now my attention is on getting this one done.

Who is on your creative team, and how did you get into contact with them/ (him/her?)

Pencils and inks are by Jason Smith, and colors by Harry Saxon. I know both of them through our editor, Heather Antos. I met Jason when i was trying to find an artist for a short horror comic I wrote called The Sisters, and Heather put us in touch; she’d worked with him on her Unlawful Good anthology. So we did the short, and he nailed it.

I actually worked with Harry Saxon on a story for the aforementioned anthology, a short comic called “The Burning Sun,” which is a weird, quiet little existential piece which I’m very proud of. I was very happy with his work, so when I started on Andrew Jackson in Space, I figured he’d be perfect.

What question have you not been asked about AJiS, that you wish someone would ask?  (And answer of course☺)

Never thought about that. I suppose it’d be nice to be asked about connections between stuff like my book and frontier science fiction like Star Trek. Science fiction in America has always played with frontier imagery, and Andrew Jackson in Space takes an archetypal image — the lone cowboy — and set it in space. There are always elements of isolation, of trying to cobble together a living, of operating outside the law or beyond the law; this book works within those tropes to an extent.

This isn’t your first go-round with the Kickstarter process.  Why did you choose KS again?

Was there any time when you thought about pitching it in a different way?

The pitch has always been the title. I’m not sure how else it could have been pitched.

How has this fundraiser gone?

Would you go back into the KS pool with another project after this one?

I’ve been very happy with Kickstarter, of course, and my only objection to going back is a fear of diminishing returns.

means to publishing a comic?

Never shut up about it, and don’t panic.

What is your favorite KS reward on this project?

Do you have another project on the KS docket after AJiS?

I have several projects in development; Q2 is going to be funding another print run of Stronghold, specifically our Volume 2 trade. We may do something in Q3 but I’m not sure it will be ready, so that may be put off until Q4. The fear is always that people will get resentful of repeated campaigns; so spacing it out has to be handled delicately.

If you’d like to back Brian’s project you can find that right here, or go to Comixology to check out Brian’s Stronghold comics.