Rick Remender and Daniel Acuna continue their stellar work as the creative team on Uncanny Avengers; the prolific writer and visionary artist bring their collaborative genius back for the franchise re-launch. Remender teamed with Acuna for the lion’s share of the first series hitting their creative stride early on and riding that momentum through the Axis event that decimated the original team to the point of leaving just three of those original team members to return, though not in the physical sense in Wonder Man’s case. The woes of this integrated team of Avengers and X-Men have been many; Thor has lost his God level power as well as Mjolnir, Steve Rogers is no longer the Captain America of record, being replaced as we know, by Sam Wilson and Havok has left the team with Wasp, still feeling the effects of the Inversion event. Those are but a few of the misfortunes that have befallen the Uncanny Avengers of past and present, however these calamitous events have allowed Remender to assemble a new Unity Squad of equally diverse membership including a vastly mellowed Sabretooth, the rambunctious brother of the Scarlet Witch, Quicksilver and Brother aka, Doctor Voodoo. This newly assembled team deals with the ramifications of AXIS while the Maximoff siblings attempt to come to terms with the startling news that they may not be the offspring of Magneto, as they have always believed. 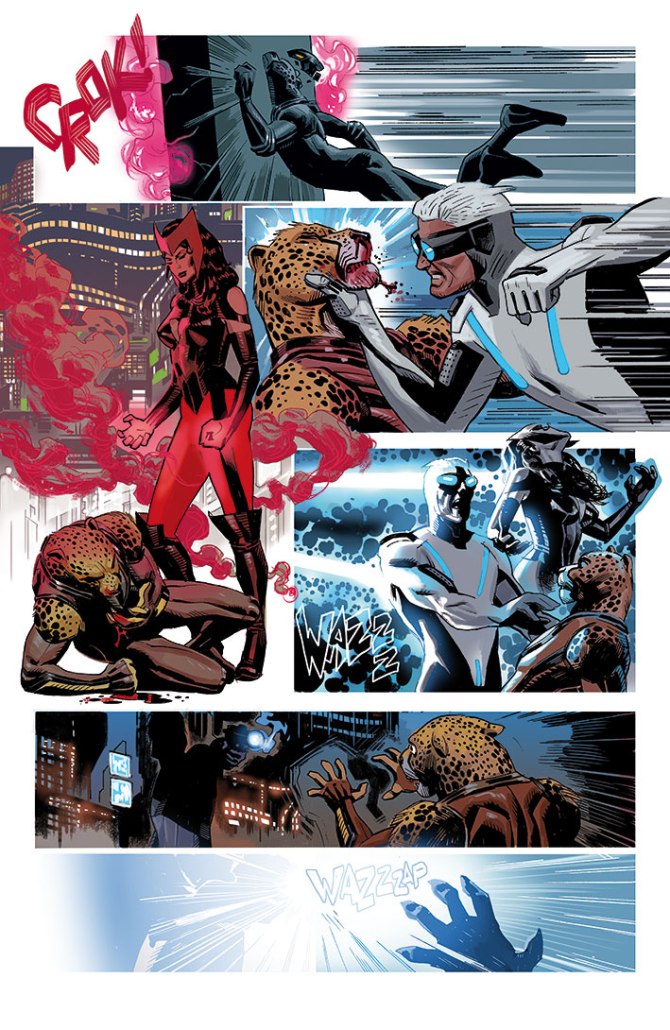 This issue doesn’t read like a typical first issue, Remender hits the ground running and thrusts us headlong right into the action which works extremely well in this case since there is little need for extensive set-up. Much of the early action focuses on Quicksilver and Scarlet Witch as they are sought after by their team mates while on Counter-Earth. The opening scene has a bit of a Star Wars cantina scene flavor to it as Quicksilver is surround by several alien species of what appear to be hybrids of humanoids and various animals. Remender cleverly introduces each of the new members while progressing the narrative; without slowing the pace for needless exposition and explanation of origin for each character he is able to present the material that is essential to the story on the fly as he shifts from one character’s perspective to the next. Remender has such a complete understanding of each of these characters having spent years most of them; this wealth of experience lends a depth of authenticity to his characterizations that very few writers share. There is a balance to Remender’s work that is born of equal parts humor, big action and sincere drama, all these elements work together to tell a story that is poignant and entertaining. His penchant for pulp science fiction tropes is yet another element at work here; from the other-worldly setting with its space-age buildings to the cryptozoological appearances of the various indigenous species, Remender captures that “spacey” sensibility that brings to mind the future as seen through the eyes of the 1950’s. The inclusion of the High Evolutionary is perfect in light of the cosmic elements that are so prevalent in the narrative as well as a shared history with the X-Men and Avengers.

Visually, Daniel Acuna has indelibly marked the previous Uncanny Avengers series with his bold imagery and iconic character designs; he, more than any of the other contributing artists, has created a trademark “look” for this team and this book. His dynamic use of vibrant colors and kinetic page design bring an electricity to this series that has set it apart from other Avengers books. Acuna’s unique and inventive style is a perfect fit for Remender’s sci-fi heavy narratives.

The result of having two visionary creators is a book that stands out both visually and on the merits of brilliant storytelling overall; Remender’s expert use of narration throughout this first issue works wonderfully to pull the reader into the strange world of Counter-Earth, just as Acuna’s visuals give us ample images to feast our eyes upon. This is a tremendously entertaining book that is as amazing to look at as it is engrossing to read. I would love to see the Uncanny Avengers around in some form after the events of Secret Wars but that, True Believers, along with many other questions remain to be answered in the fallout of Battleworld. As for this series, I will be here every month until the end and I recommend anyone who loves big action with lots of science fiction thrown in to join me, Excelsior. (4.5/5)