“What can one person do?” This is the question posed and answered in the newest Black Mask Studios book, Liberator: Earth Crisis. Matt Miner is back, taking up the cause of animal cruelty with the help of Earth Crisis, an American metalcore band.

This is a continuation of last years Liberator series, a four issue arc that put Miner directly in the spotlight as one of the premier indie comic creators working now. The simple reason is that Miner has a passion for this project like you dream about.

Sarah Mann is applying for a janitorial job in a lab that conducts animal testing. She literally walks through a protest on her way to the interview, and once she begins working there finds that her moral compass is firmly pointed in the direction of the animals and the rights that they are being denied. After several run-ins with one of the colder doctors there, she finds that her conscience is demanding her to do something.

This is similar to the first Liberator series in several ways. We have a young girl working at a lab, testing her own ethical waters, finding that they push her in one specific, confrontational direction. But what can one person do? She is caught in a hard position between the economical need to have a job and support herself in a new town and the ethical and moral decision to stand by why animals are being hurt for the sake of lotion and shampoo. Where do you draw the line? Is it okay to clean up after the scientists? To scrape the remains of animals tortured in the name of science, into a garbage can? Or are we all called to something better, something different, something more caring and careful? These are all questions posed by Miner in the series, and something that his characters have the bravery and fortitude to answer for themselves in the form of action. 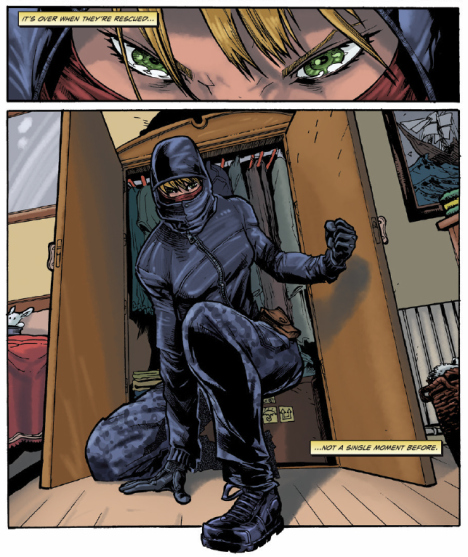 There is a return of the old guard in the form of art for this book, with Javier Sanchez Aranda on pencils and inks and Joaquin Pereyra on colors. Both have returned in magnificent fashion, delivering the disturbing images of animals in various stages of experimental surgery and in cages that make the panels so moving and at the same time hard to look at. There is no glorification of the violence, but they are necessary to the story.

Also with this book is a team-up in the best sense of the word. (My mind reckons back to those great Marvel Team-Up covers that promised so much like when Spiderman and Nightcrawler “accidentally” ended up at the same carnival.) Miner has partnered with Earth Crisis, a metal band from Syracuse, NY, with a long history of fighting for those same rights that Liberator embraces. iTunes calls Earth Crisis “the mouthpiece of America’s militant vegan straight-edge movement”. Said movement encouraged people into vigilantism of that kind that is at home with the main characters of Liberator. Earth Crisis has a companion album that will be released March 18 in the US, according to their Facebook page, titled “Salvation of Innocents”. There was partnership here, and you can see it in the names of songs such as “Out of the Cages”, “The Pallid Surgeon”, and “Devoted to Death”.

If you enjoyed the first Liberator run than I highly encourage you to go out and pick up Liberator: Earth Crisis Salvation of Innocents. Miner has repeated his previous performance with another stellar book in the Liberator mythos. The passion for the project shows through and Miner is clear with his message. Like the Liberator story, it is a message worth repeating.