Justin Jordan begins to show what he has up his sleeve just a bit with the third issue of this intriguing and brutally poetic crime drama. The main character, Orson Gage is an amalgamation of contradictory qualities; he’s a good cop gone bad and back again, he’s a chivalrous brawler bent on avenging his wife’s murder. Until now, Gage was much more enigmatic but in this issue Jordan illuminates some of the dark corners of the protagonist anti-hero’s back story while driving the plot ever forward. This is something of a tricky feat however; Jordan handles the character development on the fly by having Gage’s old partner Cobb fill in the blanks through some very Tarantino-esque exposition. The dialog in this series is so sharp you could cut yourself reading it; Jordan has a talent for imbuing his characters with the kinds of eccentricities found in  Charles Bukowski and Elmore Leonard’s crime novels. They speak in a hip vernacular equal parts Shakespeare and Kerouac; it’s a language only spoken in the darkest recesses of dime store pulp fiction.

This issue is perhaps the most violent of the series thus far but like the brutality depicted in previous chapters, Jordan approaches the brawls and beat downs as though they were a lavishly staged ballet. He and fellow genius, Matteo Scalera have elevated a baseball bat destroying a face to a thing of utter beauty to behold. Scalera has the ability to so thoroughly capture the energy of a scene that you actually feel the electricity in the room as you experience the events on the page; Jordan’s spot on, vivacious dialog works in perfect unison with Scalera’s ferociously gorgeous imagery to enliven a sequence beyond cinematic interpretation. This is due, in large part, to the emotionally evocative effect of the collaboration. I don’t believe there is a more visceral book on the racks today than Dead Body Road and this issue only serves to reinforce that opinion. Visually, Scalera creates a kind of orchestrated chaos on the page; matching Jordan’s frenetic pace beat for beat. The barroom brawl in this issue is a prime example of the brutal ballet that Scalera is able to devise through his kinetic method of line work. There is vitality in his drawing that explodes off the page, his unique use of panels and dynamic page composition work extremely well with Jordan’s action packed narrative. There are several double page spreads in this issue that illustrate the collaborative result of this creative chemistry at work better than any words I could combine. 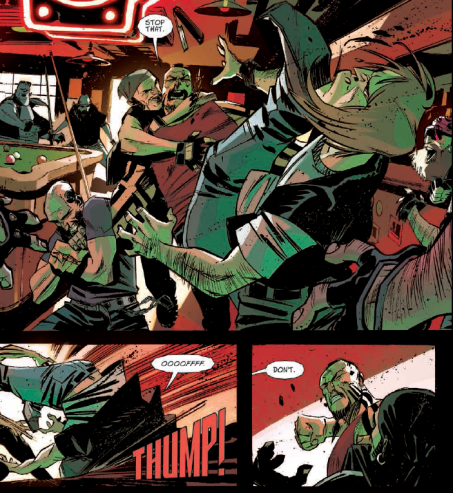 Jordan uses the majority of this third chapter to more fully flesh out Gage’s character and explain exactly what his motivation is. The characters interact chiefly through violence and sarcasm raising the “cool” factor of even the supporting characters to the stratosphere. Gage has some pretty psychotic people mad at him and that all comes into play at this point. This was my favorite issue yet and that is extremely high praise because I absolutely love this series; as much as I love Jordan’s work on his Luther Strode character, I think he has outdone himself here and Scalera adds a level of intensity to the book that gives it that extra push over the top.

I am a huge fan of the crime genre; in film as well as literature, Scorsese, Tarantino, Puzo and Leonard all have a place in the crime drama hall of fame and Jordan and Scalera bring an original twist to this category. They have taken the best of the crime drama tropes and added a visual originality along with some super high energy and what results is one heck of a heist-gone-wrong tale that delivers on every level. The only problem I have with Dead Body Road is waiting a month between issues. If you haven’t been reading this amazing series please pick it up when it is collected in a single volume. You are in for the ride of your life. (5/5)