Deadly Class has the potential to be the greatest new comic book in the line up of all Image Comics. Issue #1 of this series was a breath of fresh air filled with excitement and intrigue that reached out to my childhood of the 80s and 90s. Unfortunately for Rick Remender, Issue #2 of Deadly Class was about as interesting as re-runs of Bossum Buddies.

Deadly Class follows the life of Marcus Lopez. He is a homeless, street punk kid that has a knack for the deadly art of assassination. This issue lingers behind Marcus as he goes through his first day at Kings Dominion High School for the Deadly Arts. One could only image the craziness that would happen at a high school for teenage assassins, but Remender completely lets the reader down in this issue. He fails to present anything more than bland conversation between characters and introduces stereotypical high school cliques. 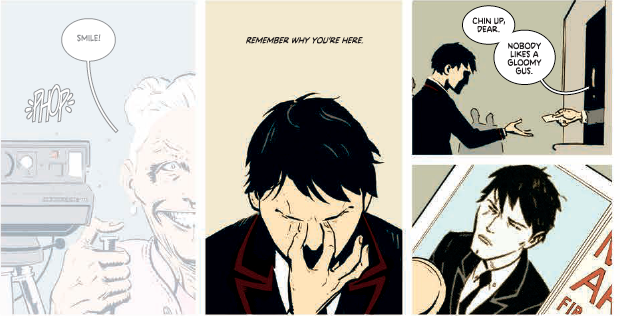 I understand that Marcus is disturbed from his troubled past (see Issue #1), but Issue #2 turns him into a complete winey loser. As he intermingles with the students of Kings Dominion, I found myself hoping that someone was going to throw him through a window. If you are looking for substance in this book then you have picked up the wrong issue because pages are wasted with no depth as to why the characters act the way that they do.

My favorite part of this issue was the different classes that students at Kings Dominion have to take. Who wouldn’t want to take Hand-to-hand combat or Assassin Psychology? The ideas in this book are great, but I just felt short changed. At the end of the issue, the students receive an assignment that they have to kill someone and they will receive a grade on it. If they are caught then they will have to kill themselves or one of their classmates will do the honor.

Interesting, right? Well, I sure hope so. I haven’t given up on Deadly Class, but usually a good comic doesn’t have a hiccup like this until ten issues or so into the run. Remender is a talented writer and I know that he has wonderful things in store for this series, but really confused the mess out of me in this issue.

The only other awkward and weird part about Deadly Class is how Wes Craig draws the characters in this comic. I do not like the way that this comic is drawn and it felt like a poor attempt at a rip off of David Aja. I’d like to see a different artist working on this book, but that is not up to me. 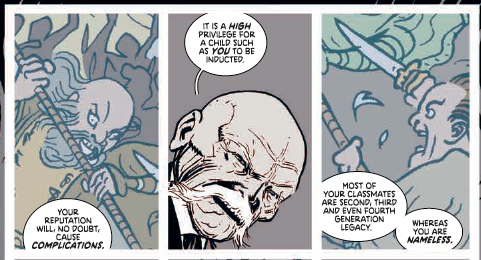 With all the negatives to this book, the positive part is that this series is only two-issues old and has plenty of room to grow. I look forward to Issue #3 getting back on track with what I know this series is capable of - action and assassination.