I love science fiction. No other genre provides storytellers with such immense creative freedom. Some of the world’s greatest comic book heroes started out as, and are very much still products of science fiction. Some examples include the infamous Superman, the alien who’s more of a man than any of us. The Fantastic Four, earth’s mightiest heroes, with powers gifted from a journey to the stars. The X-Men, a new breed of human, genetically gifted with powers beyond that rival comprehension. The Hulk, Iron Man, The Flash, the list goes on and on. These super-heroes and their stories are products of what I like to call super-hero-oriented SciFi. After my initial read of the first issue of Garry Mac’s possible space opera in the making Gonzo Cosmic, I wasn’t surprised to see that Gonzo Cosmic did not fall under the category of super-hero-oriented SciFi. Instead, Gonzo Cosmic is one of those rare comic books whose plot reflects the intricacy and creativity of traditional, no-holds-bared SciFi. The great masters of traditional science fiction, Asimov, H.G Wells, Phil Dick, etc, weren’t afraid to push boundaries and assume that their readers were an intelligent audience, capable of thought equal to if not greater than their own. From the very first page of Gonzo Cosmic, I knew I was in for something quite unlike anything I’ve read in most comic books today. 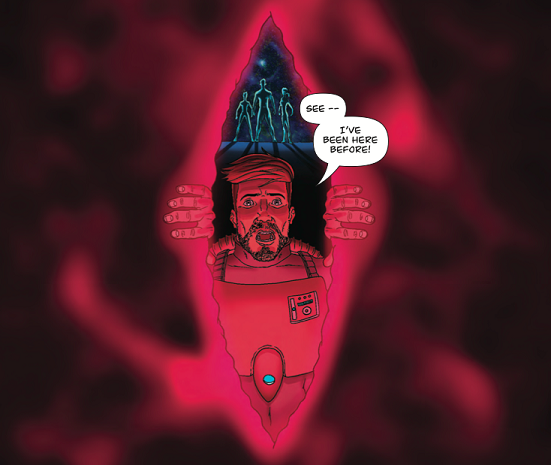 I know what you’re thinking… and no, it’s not that.

Being the first issue of twelve, I really didn’t expect much in the realm of plot development from Gonzo Cosmic #1; thinking: maybe a nice twist/cliffhanger at the end? But instead I was treated to an interesting and complex back-story, which got me thinking right off the bat. Even from this first issue you can see that Garry Mac definitely does not plan to take Gonzo Cosmic lightly. The first half of the comic book frankly isn’t that great, with character and plot device introductions feeling rushed and flat. However, it is clear towards the second half of the issue that an enormous amount of information needed to be given, and that its early shortcomings were necessary for the unique and complex scenario of the issue’s climax to be able to take place. Gonzo Cosmic’s art also leaves much to be desired, panel layouts and color design are top class, but the penciling falls short of modern standards of excellence. I’m not saying that the art looks bad. It just doesn’t look great. 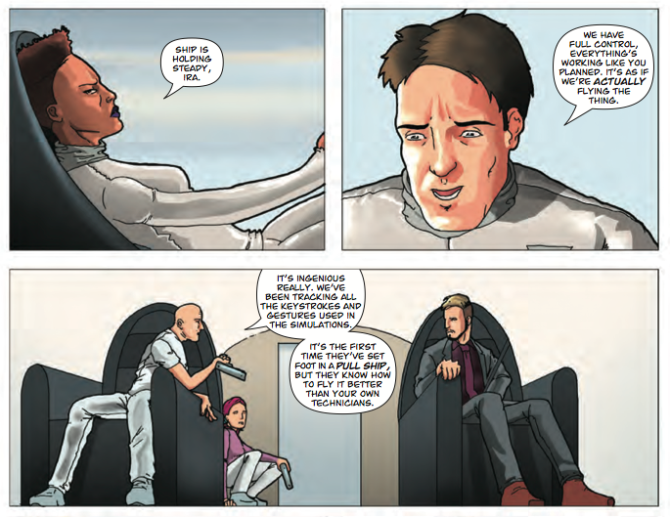 This scene in particular is all over the place.

Despite its forgivable shortcomings, Gonzo Cosmic is good, quite good. I’d highly and happily recommend it to any SciFi fan. And for the average/casual comic book reader, I’d still say to give this series a shot. Not for the sole purpose of supporting an independent writer/artist who’s obviously very talented, but for the sake of good storytelling in general. Just reading Gonzo Cosmic would instantly hook anyone with even a mild curiosity. The story promises to dive into the very essence of SciFi, and personally, I can’t wait to see it though till the end.