I have been waiting for the conclusion of this story since the last issue appeared on the racks a long time ago in a comic book shop not so far away. However collapsed publishers and consequential legal entanglements concerning the franchise conspired to all but permanently keep the final act of this narrative from ever seeing publication. Enter Marvel, like some proverbial knight in shining armor, who several years after acquiring the rights to Marvelman (the original name of Miracleman) have finally begun re-printing the Alan Moore (here credited as “The Original Writer”)/ Neil Gaiman run. This run is perhaps the single most influential run in modern comics’ history, there are very few creators working today who would not include this vital work on their list of essential reading.

In this current incarnation of the work, Marvel offers an enhanced, issue-by-issue re-printing of the original opus with a rather substantial amount of extra material, the majority of which could have been omitted in favor of a lower cover price. Some of it is quite interesting, like the Joe Quesada interview with series creator Mick Anglo, and some of it is rather superfluous, like the over-abundance of silver age re-prints, but none of it is necessary to following the Moore narrative which is the reason anyone is going to pay the inflated price of $5.99 anyway.

I haven’t read the original issues of the series in quite some time, I do remember adding it to my pull list when I was about 14 years old, being a fan of Alan Moore and later of Neil Gaiman I couldn’t believe that this series existed. I felt like my local comic shop owner had revealed a secret comic book to me that only this ultra-cool (now known as nerds, geeks or fanboys) sect of comic readers knew about. Miracleman was my introduction to a school of writers that would later lead me to Grant Morrison, Garth Ennis, Mark Millar, Jamie Delano and the like. This series opened my eyes to an infinite world of imaginative and innovative creations, like the key harmonic to the universe did for Micky Moran, Miracleman changed my perspective.

The first issue entitled “A Dream of Flying” was originally published way back in the Reagan Years in 1982. To fully appreciate reading this series today you should know a bit about the world of 1982. America was quite a different place, there was a general feeling of complacency if not well-being, the Cold War raged on but here at home the economy was strong. Britain inundated our shores with the political protests of punk bands like The Clash and Public Image Limited, then came the “New Wave” bands of the second British Invasion, like Adam and The Ants, Duran Duran, The Cure and Depeche Mode.  America made its contribution to the musical landscape through The Misfits, The Dead Kennedys, Black Flag, The Circle Jerks and The Ramones with a deluge of hair metal bands like Poison and Motley Crue sitting on the sidelines, just waiting to take the field in a few short years and blacken the eye of the post punk era music scene with big hair and little I.Q.s. The world’s mind was ready for visionaries and those visionaries sprung up in the arena of comic books. The stage was being set for Watchmen, The Dark Knight Returns and V for Vendetta, Miracleman was the book that set the stage. The writers that this work inspired are too numerous to list completely but surely would include; Grant Morrison, Mark Waid, Paul Jenkins and any other writer who has ever endeavored to take pen in hand with the intention to de-construct a super hero down to the barest core. In fact Alan Moore must be acknowledged as the inspiration for The Sentry, Incorruptible and most recently Buzzkill.

In this first issue of Miracleman we see Moore’s literary style in its infancy but no less impressive than it goes on to become in his later equally influential works. It is with these later works in mind that we can now read Moore’s Miracleman run and see the evolution of an ambitious visionary style that would spawn a generation of imaginative writers. Moore’s economical use of language presented a superior intellect without falling into the use of unnecessarily flowery prose and lengthy, rambling dissertations. As is evident in this issue, Moore’s approach to dialogue was something of a work in progress. Micky Moran often speaks in a clumsy uneven manner particularly after his reconnection with the Miracleman power that has been dormant inside him for decades at this point. His conversations with his at first very skeptical wife as he tries to explain his omnipotent alter-ego read a bit like silver-age dialogue. Her protestations and inability to readily accept Micky’s transformation add an air of realism that was not present in any other super hero comic book of the time.

This issue is all set up, there is no introduction of a villain as yet or really even a full explanation of Miracleman’s mission here on Earth. The series takes on a darker tonal quality almost immediately as Moore wastes no time in pushing the envelope of what can be done with the tropes of a super hero story. His run becomes almost bleak, in exploring themes of a more ethereal and esoteric nature Moore quite organically re-imagines the history of the character in the light of these more somber narratives.

These re-prints are faithful to the original Warrior Magazine versions without any changes to the narrative. The only visual alterations are to the lettering and the addition of a new coloring method, other than that these are the original stories as they appeared in 1982. Garry Leach’s artwork stands the test of time amazingly well. You can easily see the inspiration for such great artists to come as; Frank Quitely, Gary Frank and Chris Barnham in Leach’s work. His extremely realistic anatomy and expressive facial renderings bring a sense of almost stark realism to his work. Leach’s page compositions were very dynamic for the time, breaking the nine panel grid approach that was often still relied on at the time. He had a kinetic sense of storytelling that had not really come into its own yet in 1982. There is a slight nostalgic feeling for me reading this series because I can remember where I was the first time I read it but beyond that the artwork and the narrative hold up exceedingly well. The more vivid, saturated new colors add a vibrancy the originals lacked without appearing re-colored or overly enhanced. 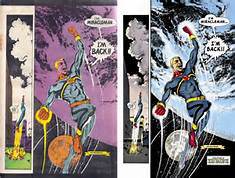 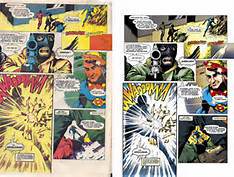 The only drawback to these re-printed masterpieces is the inflated price tag. Absolutely the material is worth every cent but I really wish Marvel could knock down the additional material and the price by around 25%. The extra material is nice to have but I would like the option to buy a pared down edition with only the main story included with perhaps one silver age story or some production notes and sketches. That being said I still feel completely justified in rating this book a perfect 5/5 on the merits of the Alan Moore work only. This is mandatory reading for any true comic book historian or serious comic book reader interested in the evolution of the modern comic book story. I only hope Marvel realizes the financial strain a lot of us are under and lowers the price of future issues. So until next time, see you at the comic book store.