First, a history lesson. While Disney’s Haunted Mansion was still in the concept stage, famed Imagineer Rolly Crump contributed a series of designs for a spill area called “The Museum of the Weird”—a walkthrough section populated with all sorts of strange, supernatural oddities.  Sensing that this was something unique, Walt Disney planned to make the Museum of the Weird into its own attraction, but unfortunately, he passed away before the plans could come to fruition. So imagine my surprise when I found out that these plans would finally be realized in the medium of comics. 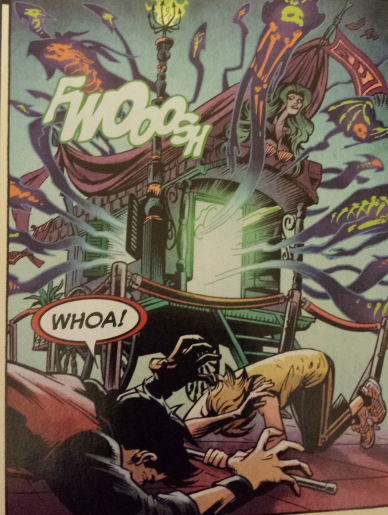 Disney Kingdoms: Seekers of the Weird is one of the first attempts to strengthen the Disney brand through Marvel, and I imagine if it’s successful that we’ll see more comics in this vein. Consisting of a rather fitting creative team—Brandon Seifert of Witch Doctor, Karl Moline of Buffy, and Jean-Francois Beaulieu of Marvel’s Oz—the first issue of this project is actually a pretty enjoyable read.

The story revolves around a brother and sister, Maxwell and Melody, as they confront the strange creatures lurking in their parents’ small occult shop. And when their parents are kidnapped by taxidermy chimeras, they must join their join their uncle and take their first steps into the Museum of the Weird. Although not quite as edgy as Witch Doctor, which is to be expected with the Disney logo on the cover, there were still enough weird creatures to whet my appetite for unusual monsters. On the other hand, I swear the kids’ uncle is Seifert’s subtle way of sneaking Doctor Morrow (of the aforementioned Witch Doctor) into a different comic. There’s plenty of that same sarcastic voice to lessen the “supernatural-things-are-real?” moment of realization, and honestly, I kind of wish Uncle Roland were the main protagonist.

As for Karl Moline’s art, it’s pretty solid, and he does a great job of bringing Rolly Crump’s designs to the page. I especially love finding the little nods to sci-fi and horror culture, such as the posters in Maxwell’s room. But one small complaint I have is with Moline’s storytelling, especially towards the beginning of this issue. There were a few instances where one panel didn’t clearly lead into the next, and I can’t help but think a few small changes to the angles could make the action clearer and less abrupt. On the other hand, this could be an more of a problem with space. Perhaps panels had to be cut in order to make the comic fit. Otherwise, Moline was a great pick for this issue, especially in conjunction with Magyar’s bold inks, which lend themselves nicely to the supernatural tone. Beaulieu also does a great job with keeping the color palette nice and dark while still using enough variety to make every page pop.

Note the lettering and the close angle the door is shown from.

On the whole, I’d like to see more of the supernatural in later issues. This issue really shone when Crump’s oddities slithered onto the page. I’ll be sure to pick up at least the next issue, especially if supporting it means that Seifert gets to do more Witch Doctor in the future. (I also promise I will shut up about Witch Doctor if I review this series’ second issue.)

If you’re curious about Rolly Crump’s concepts for the Museum of the Weird, this is a quick overview. 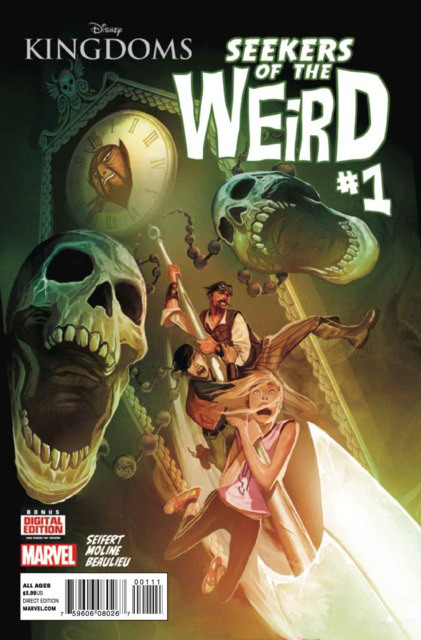