If you’ve never heard of a “twofer” before I apologize.  In the cannon of my youth, that was a great deal, a “two-for-one”.  Although you have to purchase these books seperately, I’ve reviewed them together…such a deal…and you’ll want to go out and get them anyway.  Titan Comics has partnered with noir publisher Hard Case Crime to showcase new and old crime stories. It’s a move that can only benefit both companies and I had a chance to look through their first two releases,Triggerman and Peepland, on sale on October 5 and October 12 respectively.  After reading both of these firsts…holy crap…these are great crime books, and that entails all you might think as far as content.

Triggerman, written by screenwriter and director Walter Hill (Last Man Standing, The Warriors), is the story of ex-con Roy Nash, a man whose skills include intimate knowledge of any number of painful things that can happen to the human body.

The story is pretty light on dialogue, but that doesn’t take away from the movement of the plot.  It’s fast-paced and gritty.  You can almost smell the musty pages of a spinner rack book as you read.  It’s 1932.  Nash shows up in a small western-y town on the hunt for a man named Blondie Egan.  The town is dusty and dry and the bar is nearly empty except for an old cowboy, the bartender, and a dame.  How can you not enjoy this kind of a book?

Walter Hill’s name may seem innocuous, but a quick IMDB check will prove that you know his work.  He’s mainly a script writer, and each and every one of the films that are credited to him is a western in the purest sense.  You can see here where this story fits into his overall work quite neatly.

Jef’s (9/11) artwork is beautifully detailed, his backgrounds don’t just fade into themselves, it seems you could almost take a magnifying glass and see details deeper in the the art that could be printed because of their delicateness.  He has a cinematic feel to his art, as if he watched all of Hills films right before he began drawing and used them as inspiration for his shots and angles.

The comic is bringing the sexy back to crime comics.  There is a fantastic gallery of pulpy covers in the back, and the crazy-good artwork by Jef paired with Walter HIll’s story make this a must read. 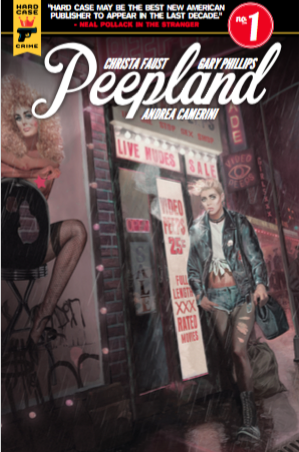 Dick Durbin makes on-the-street flasher movies, and catches something on tape that gets him in trouble with some very rough guys.  They chase him into a strip joint, where he stashes the tape in Roxie’s booth.  She takes most of the issue to figure out weather or not to watch it.  A.J. is in love with another stripper named Aiesha, and on her way to becoming a statistic in crime-ridden New York.  It’s the first chapter in a crime novel.  It sets the tone, introduces the characters, and sets up issue two.  It’s perfectly crafted.

Faust and Philips (is that a P.I. firm name or what?) have picked a perfect time period for this book, bringing that 50’s style pulp writing and infusing it with so many 80’s references that I kind of wanted to put on my parachute pants and plug in my walkman.  (I had both at one time.)  There are so many ways they could go with this story that it’s kind of exciting to have to wait for it.  They weave in all of the stuff that made the 80’s great and scary at the same time, from punk rock to the burgeoning AIDS epidemic.

As far as a I can tell this is the first comic work that Andrea Camerini has done, but based on this I think we can expect to see a lot more.  Her style is beautiful and matches the tone of the story, lovingly recreating Times Square and the 80’s along with the writers.  Just as in Triggerman there are a slew of pulpy pinups and cover art in the back, and those are awesome as well.

The Hard Case Crime label his delved into comics in partnership with Titan.  Crime stories have a long history in the industry, and there is no better nor well-versed company to bring them back to comics than Hard Case.  The   Both Triggerman and Peepland represent great storytelling and fantastic comic making.