Review: Seraph of the End is quite the peculiar title. On the outset it looks really intriguing. The characters look cool, the military outfits look really cool, and then you add in vampires and demons and I’m sold. The premise is very similar to Attack on Titan, mankind has fallen and has been backed into a single city guarded by an elite military in order to keep the evil beasts out.

And we have a main character who’s brash and understandably wants to kill them all with his very own hands. There is a difference in the two however and that’s the different approaches taken to introduce us to this world and allow us to understand its inner workings.

The story starts really interesting. Lurking within the bowls of a vampire citadel are a group of human children being used as blood cattle for the vampires overseeing them. These kids have no way of getting free and are under the assumption that they are the last of humanity. Which is understandable. As things progress the kids come up with an elaborate ruse to get out of this nightmare situation and ultimately it costs them the lives of everyone but one. Enter our hero: Yuuichirou Hyakuya.

He’s able to break free of the confines of the underground citadel and finds himself atop a mountain where he’s greeted by some soldiers who call themselves the Moon Demon Squad, an elite vampire killing group protecting the final remnant of humanity. It’s one helluva an awesome first chapter and really sets the pace for an awesome manga to come, right?

Chapter 2 opens up 4 years later with Yuuichirou killing a demon while taking up the fight against the beasts alongside the Moon Demon Squad. Or at least I think it is. If it’s other cadets it’s never explained, and while that too is a cool opening show the next page then sees us attend the following day after he slays a demon where in Yuuichirou is suddenly attending high school.

This is where there story immediately begins to fall apart for me and sadly it doesn’t get any better from there. For the rest of the chapter we see our guy be given a snarky, expository fountain of a field leader who will oversee all of his duties from this point on. Her name is Shinoa Hiiragi and I’m still not sure if I like her or not. She tells Yuuichirou that he’s required to make at least one friend before he’s allowed to become a member of the Moon Demon Squad – which literally makes no sense to me, no matter what kind of explanation that attempt to give. It’s about building teamwork by the way.

Enter our third main character into the mix, Yoichi Saotome who’s being bullied. Can you guess where this is going? The rest of the chapter turns into a by the numbers story where Yuuichirou with the unwitting help of Yoichi end up taking down a loose vampire who looks like a little girl after an experimentation in the school goes awry. This prompts Yoichi to call Yuuichirou his friend in front of the Moon Demon Squad and the chapter ends with Yuuichirou being told that he’s now a member of the squad. 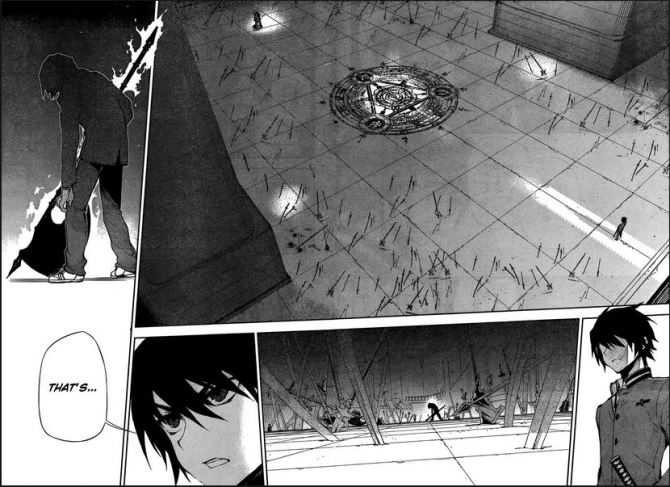 Okay. An incredibly strange way to get our hero into the main story but surely he can now do what he’s been hoping for and train to go kill vampires and demons, right? If only the heavens didn’t forbid. Chapter 3 finds us and Yuuichirous still trapped as students in this school that seem to be going nowhere and making no attempts to actually teach our heroes any sort of training. After the bullies from last issue start trying to get Yoichi to take them in as his underlings we find out that one of them went into a forbidden area inside the school and got himself consumed by a demon.

This of course allows us to learn that the Moon Demon Squad members all wield weapons housing demons they’ve struck a contract with. And that there are apparently 7 wonders of this school, many of whom are forbidden, and suddenly this is Yuuichirou’s first time ever learning about any of these. I mean, was there even an orientation for this damn school?

Naturally Yuuichirou enters the forbidden room all by himself and with his own willpower defeats the demon that otherwise would have killed him if he wasn’t the/a main character and single handedly save the bully from being eaten. It’s very tropey and hokey, and normally I would be able to handle the events seen in the last 2 chapters because I understand the tropes of Shonen Jump action series. I grew up on them and I can find fun in them.

But man, they feel extremely out of place in the story the first chapter and the opening pages of the second chapter build us up for. Momentum of the story is completely halted so we can go on these side quests that ultimately don’t feel like they’re deserving of being told. I mean, why would making one friend suddenly make Yuuichirou eligible to join the Moon Demon Squad? And why hasn’t he heard of these 7 wonders of the school no one’s supposed to touch?

Shinoa does make some interesting comments regarding the school and its existence, and possibly the reason for its existence, that have intrigued for what’s to come. So I’m going to stick with this man for a little while longer to see what’s going to happen. Maybe another volume or 2. But I simply can’t waste my time if this series doesn’t break out of its immediate slump and start picking up quickly. If he has to be at school, fine, but show Yuuichirou really interacting with the other students, hell show other students being in this school, and show them actually learning and training to be demon hunters. That’s obviously why they’re there. Get the rest of the student body and teachers involved. Please.

Also the volume ends with Yuuichirou’s best friend from when he was a kid, one of the ones who were killed at their attempt escape, Mikaela Hyakuya (they’re not related, they just see themselves as brothers) is alive and vampire. Which I don’t care if I saw it coming, I just want to see where it leads to.

Before I forget to talk about it, Yamamoto’s artwork is really good. Very action packed, all the character designs look cool, the monsters look really good. And his world feels immersive. If the story was just better I would be glued to this series like that. I really like looking at the book, just not so much actually reading it right now.

Final Score: 2.5 World-Ending Vampires out of 5