The Micronauts have travelled from Microspace, brining terror and entropy from their universe into our own, and ROM is determined to destroy it! Captain Oziron “Oz” Rael and the crew of the Heliopolis become caught up in the conflict on Earth between the Transformers, Action Man, G.I. JOE, M.A.S.K, and ROM the Space Knight in REVOLUTION #3, as battle lines are drawn. But when M.A.S.K’s Matt Trakker uncovers the truth about the Transformers, Miles Mayhem and G.I. JOE Commander Scarlet have some explaining to do, and after observing events from the sidelines the nefarious Baron Karza prepares to strike.
REVOLUTION hits the mid-way point in this bi-weekly event uniting the IDW Publishing and Hasbro properties: Transformers, G.I. JOE, Action Man, M.A.S.K, ROM, and the Micronauts for the first time in one consolidated universe. This is certainly a pivotal issue of REVOLUTION as well. In fact, considering all the plot developments and exposition, this issue could’ve easily seen the storyline go off the rails, but writers John Barber and Cullen Bunn do an excellent job of brining the various plot strands and character arcs together for this installment. 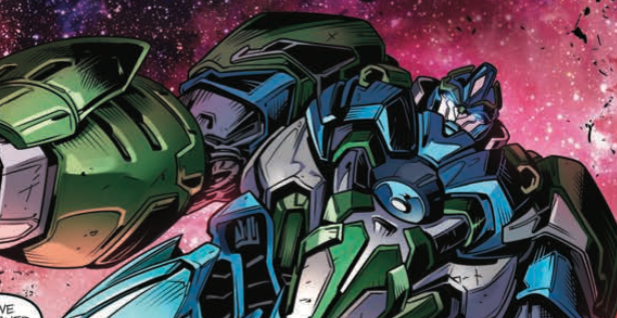 Yes, the Micronauts enter the fray in REVOLUTION #3, tumbling through the Entropy Cloud that’s consuming Microspace, only to be confronted with a gargantuan revelation connected to the very origins of their own universe - and beyond! Micronauts rogue Captain Oziron Rael, daredevil Space Glider Phenelo-Phi, seasoned Space-Warrior Acroyear, Orbital Defender Larissa, the newly sentient Biotron unit, and Oz’s wry first mate, the small robot Microtron, also learn that time moves very differently in this realm, but can they really trust Baron Karza and his claims about the mineral Ore 13 being the only hope of saving Microspace after everything he’s done?
There are some tense scenes back at G.I. JOE Governor’s Island HQ between Matt Trakker, Miles Mayhem and Scarlet following the capture of the Transformer Kup by M.A.S.K last issue using vehicles enhanced with Cybertronian technology. Indeed, the actual reasons for the explosive instability of the crystalline Ore 13 - which the Transofrmers can use as a power source - will soon becomes a key factor in the conflict, and one that will set in motion a chain of events on all sides. With Autobot City in Monument Valley sitting on a huge cache of Ore 13, Optimus Prime, his Decepticon ally Soundwave, and Council of Worlds Representative, Windblade, now plan their next move with ROM as the space knight explains his mission to vanquish the shape-shifting alien Dire Wraiths that have secretly infested Earth and infiltrated the military - by using Ore 13 to enhance their dark enchantments and cloak themselves from ROM’s analyzer.
Fico Ossio has done a stunning job with this issue, it looks amazing, and the action flows from one location to the next seamlessly. Ossio’s artwork captures every nuance and intricate detail of the characters, be they human, Micronaut, Space Knight, or Transformer, making each one feel distinct and clearly defined together with their individual environments. The scenes with Oz and his crew in Microspace as they traverse the Entropy Cloud and what they discover there is also gorgeously realized. We get some brief scenes with the operatives of G.I J.O.E and M.A.S.K, a fun moment as Kup lets his mouth run away with him, and there are some highly charged and dramatic moments with the Transformers in their Autobot City. Sebastian Cheng’s colors bring added clarity and intensity to every scene, with strong hues and vibrant shades beautifully complementing Osso’s art, Baron Karza in particular, looks incredibly menacing, and the moments with ROM in front of the spacebridge are awash with sparkling tones of energy that seem to crackle and leap from the page.

With Scarlet receiving some disturbing news about the dead J.O.E’s, the mystery of Baron Karza’s secret ally, and an unexpected visitor on the Heliopolis, REVOLUTION #3 races towards an exciting multifaceted cliff-hanger with a clash of values between Optimus Prime, Soundwave, and Windbalde, the chance for ROM to decisively protect the Earth from the Dire Wraiths, and the Micronauts adventure into a universe unlike anything they could’ve possibly imagined; all collectively sends REVOLUTION in entirely new and unexpected directions.
Even though REVOLUTION #3 is structured in a way so that its not absolutely necessary to have read the REVOLUTION tie-in issues: Transformers All Are One: REVOLUTION #1, ROM: REVOLUTION #1, and Micronauts: REVOLUTION #1, it still works on virtually every level regardless, but if you have read the tie-in’s it makes the events in this action-packed issue of REVOLUTION a more exciting and all encompassing experience overall.
REVOLUTION #3 skillfully begins to knit together the bonds between the IDW titles involved in this crossover event. The circumstances which dive the plot and the motivations of the characters all mesh in a way that feels totally organic and believable, nothing feels contrived, and the shared threat of Ore 13 now yields far greater links between all factions than we ever thought possible. Its great to see the Micronauts in this issue as well, their integration into the wider scope of the IDW universe opens the gateway to endless possibilities, and I’m looking forward to seeing them interact with the rest of the key characters in this series. REVOLUTION #3 is another stellar issue in this major crossover event, packed almost too bursting point with surprises, exciting plot twists, impressive artwork, and with a wealth of stylish variant covers to choose from, IDW Publishing’s REVOLUTION is certainly delivering the goods, and then some!