Summary: Emma and her friends have a pretty good life at the orphanage they grew up in. Though the rules may be strict, the caretaker is kind. But why are the children forbidden from ever leaving…? [VIZ Media]

Review: The Promised Neverland is one of Shonen Jump’s newest Jump Start series. Remember Takuan and Batsu, which lasted only 3 test chapters in the English Jump Magazine? Yeah, it’s like that. There is a difference though, before I started reading this I had heard that it got picked up for new permanent serialization. It’s obvious that Jump has hope for thenew kid on the block, but is it really that good?

Actually, yeah I quite liked it. The first chapter wasn’t stunning per se but I liked it well enough and I’m very interested to see where the story goes from here. It begins with several pages of Emma and her fellow students beginning their day while Emma narrates about the wonderful life she lives with all of them. She and two other students are the oldest ones at 11 years old and we learn that these kids have been here all their lives and know nothing of the outside world.

They’re forbidden to go beyond the limits of the forest surrounding their orphanage. These barriers being a fence at the edge of the forest and a gated building that stands between them and the outside world. Having been raised almost exclusively in this orphanage there are simply things about this life of theirs that they all accept, and this is one of those. In fact at one point in the first chapter Emma discusses this rule to the reader and comes to the conclusion that the outside seems rather creepy. So obviously the caretaker doesn’t have to worry about any of these kids attempting an escape.

Overall the first chapter really follows a day in the life of these kids whilst Emma narrates for us just what their life is like here. Some things stand out as strange however during her follow along of the day. Such as each kid has large numbers tattooed to their necks. As well as there is a daily rigorous IQ test where the kids answer – at least – 60 multiple choice questions in various fields of study all of which within 10 seconds time (per question of course). 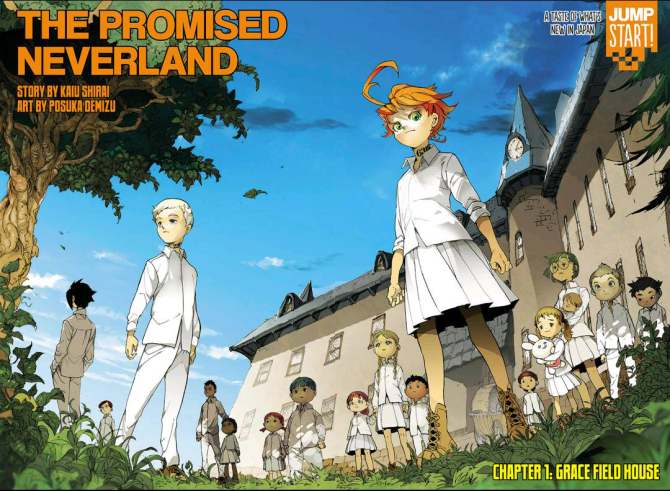 It’s easy to figure out early on that something isn’t quite right and that by the end of the chapter things are going to be vastly different. Sort of because of this feeling of an oncoming storm that perhaps the first chapter didn’t completely wow me as I was just waiting and waiting for that other shoe to drop, but man when it does it hits hard.

It’s really nice getting to see these kids live happily in their daily lives with no knowledge of the horrors lying beyond the boundaries of their small world because when it’s finally revealed the truth of the orphanage and the destiny of these kids the story turns into what I think will be a fun, human look at what it’s like to raise livestock on a farm. And perhaps give readers an insight into just what they’re eating next time that pick up a hamburger or a piece of chicken.

If you haven’t picked up on it by now the big reveal centers around finding out that these precious kids are being bred as livestock for true to life monsters that look like their straight out of Pan’s Labyrinth. For all intents and purposes these kids are cattle and are being raised daily to live happy, healthy and mentally educational lives so that they make for better meat for the monsters running this joint. Now what their mental education does for the bodies that are being consumed we have no idea yet, but I’m interested to learn more.

Story wise I’m really interested in seeing what comes next and overall I thought it was a pretty strong opening chapter. Now as far as manga art styling goes often many of us readers get a sort predetermined feel for how manga is supposed to look. And often times Japanese artists do follow under those predetermined guidelines. Every once in awhile however we get to see manga styles that look nothing like what you expect from this medium and Posuka Demizu definitely falls under that category.

I can’t really place what their style feels like to me. I would say it’s really more Disney for most of the chapter and then definitely gives off a Jim Henson vibe by the end. However I really feel like their style is just unique to them as an artist and I’m totally okay with that. I love looking at the art of The Promised Neverland.

Let’s see where this goes together, shall we?