“The Laws of Inferno Dynamics”

Review: The last seven episodes have been leading up to this: Ghost Rider vs. Eli Morrow. Only, this episodes really gives us the Agents of S.H.I.E.L.D. vs. Eli Morrow. Ghost Rider is sadly sidelined for majority of the episode being pinned to a wall by Eli’s carbon spikes. It makes sense in how it plays out in the episode but really one of the less exciting things is that we barely get to see Ghost Rider and Robbie do anything.

The Laws of Inferno Dynamics focuses on S.H.I.E.L.D. laying siege to Eli’s hideout where he’s building a plutonium bomb that will destroy over half of Los Angeles. The team have to put a stop to it without accidentally igniting the explosive. There’s plenty of action and thrills to be had, but I truly was disappointed to see Robbie and the Rider pressed out of the equation for majority of it all.

Highlights however do include, but are not limited to: Daisy is now a member of S.H.I.E.L.D. again. After attempting to stay away from the team for first several episodes of the season Daisy was drug back into the equation along with Robbie after Coulson took them in. After trying to remain a secret asset in their fight against Morrow, Daisy is forced into the spotlight of cameras and reporters where Director Mace – who looks great in his new combat suit – announces that she’s been on a secret mission for S.H.I.E.L.D. this entire time.

There is an epic fight scene that sees almost everyone get involved. Yo-Yo steals the show in a Quicksilver in X-Men: Days of Future Past kind of way as we see her changing around everyone’s weapons in a really cool slow-motion scene. I’m so glad to see Yo-Yo getting some more love. She deserves it.

And then there’s the underground scene where AIDA is instrumental in creating another interdimensional portal that sends Robbie/Rider and Eli into the abyss. I’m sure we’ll see Robbie again, especially after Coulson mentions to Daisy that “the last Ghost Rider” was able to escape an interdimensional plane. Of course that begs the question of how Coulson got that information and why he never chose to share it with the class until now.

I hope we get to see “the last Ghost Rider” and especially Robbie again. 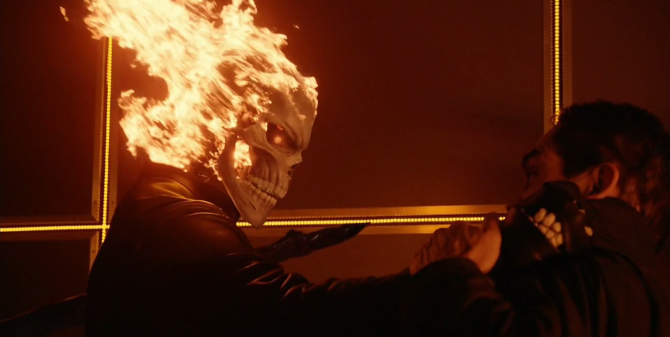 Mace and Coulson get into a fight that sees all their cards laid out on the table and coming to a mutual understanding in the roles the two of them now play. I really enjoyed that, and I hope from this point moving forward Mace and Coulson can work more closely together. Although it was to see the two of them play mind games for a short while I think now is the time to make them truly a team that trusts and triumphs together.

Finally, Coulson tells Mace about AIDA being an android and this leads to Mace confronting Radcliffe about his LMD project. Rather than see AIDA put out, Mace decides to bring Radcliffe, AIDA and their lab to S.H.I.E.L.D. headquarters to be supervised. After sending Nathan B. Nathanson to Radcliffe’s lab to pack up all his things, AIDA kills Nathan after he learns her secret.

It’s revealed that AIDA has been keeping May under sedation for an unknown period of time and that the May we’ve been seeing, possibly over the last few episodes, has been an LMD created by AIDA to infiltrate the team. How long this has been going on and how it fits into the current timeline of the events of the show has yet to remain seen.

I was also sad that we didn’t get a crossover with Doctor Strange, perhaps with Wong showing up to take the Darkhold back from S.H.I.E.L.D. which is still in their possession. We may still get one yet but it would’ve been nice to see regardless.

With this opening arc closed out there are still some loose ends that need tying up. One of them is leading to be probably a big part of the final third of this season, I’m sure. The others I’m not so sure about yet:

I’m very interested to see where the season progresses from here as we move into an LMD storyline. I sure hope it will be a good one. I know we never got Jocasta with Ultron in Age of Ultron, but AIDA is definitely a good substitute.

We’re also getting a surprising web-series called Slingshot that will be 6-episodes long an focus on Yo-Yo in a secret mission which makes me very happy. Harkening back to I’m glad she’s getting the love she deserves, I think this web-series will be a lot of fun. I’ll definitely be covering it here.

Well, see you again in January when Agents of S.H.I.E.L.D. season 4 returns. We’ve still got a lot of story to cover and I look forward to it all.