Is ROM the Space Knight a murderer? That’s the burning question that fuels the growing conflict on all fronts in REVOLUTION #2 as the explosive threat of Ore 13 grips the world. As Optimus Prime and the Autobots resolve to hunt ROM down and make him pay for attacking the human forces of G.I. JOE., Commander Scarlet Shana O’Hara must now come to terms with G.I. JOE’s losses, and seek assistance from the only people who can help her save the planet - Miles Mayhem and the special operatives of M.A.S.K

REVOLUTION #2 continues the exciting bi-weekly event that will bring the IDW Publishing and Hasbro properties of the Transformers, G.I. JOE, Action Man, M.A.S.K, ROM the Space Knight, and the Micronauts together for the first time.

In this issue, REVOLUTION Chapter 2: The Devine Source of Liberty, writer John Barber and Cullen Bunn build the momentum from last issues shocking cliff-hanger, where ROM intervened in the clash between the Transformers and G.I. JOE in Portland, Oregon, and seemingly murdered the original G.I. JOE General Joe Colton! Knowing this act will only make relations worse between the Transformers and humans they are sworn not to harm, Prime and the Autobots head for a showdown with ROM, but the Space Knight isn’t about to let anyone - Cybertronian or otherwise - stand in the way of his mission to destroy the Dire Wraiths that have secretly infested Earth. 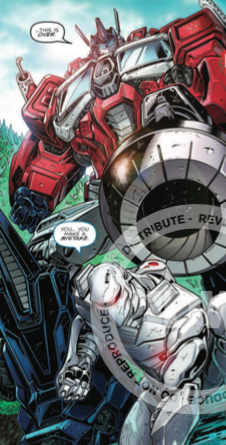 Considering the huge cast of characters involved, John Barber and Cullen Bunn do a really impressive job with all aspects of this issue, and deliver some top notch pacing and characterization across the board. The face-off between the Autobots and ROM is slick, frenetic, and action packed. Meanwhile the emotional fallout for Scarlet and her G.I. JOE team mates is poignantly handled during the aftermath in Oregon and in some highly emotional and tense scenes back at G.I. JOE Governor’s Island HQ. Scarlet finally decides to go to M.A.S.K director Miles Mayhem to enlist the assistance of his independent non-military team of experts with a checkered past.

Whether you are following all the tie-in issues or not, REVOLUTION #2 keeps everyone in the picture, fans, and newbies alike, the issue unfolds quickly, but introductions to all the characters - especially the M.A.S.K team - are done in a way that’s integral to the plot, and you never feel like you’ve missed anything - which can often be the case in some big cross-over events. So far, at least, REVOLOUTION is brining all the major aspect of the IDW universe together in a very clever, intricate way, and there is already a sense that it’s building towards something very special indeed.

Fico Ossio’s artwork continues to impressively realize the grand scope of REVOLUTION. The fight between Optimus Prime and ROM that dominates the first half of the proceedings is arguably the big highlight of the issue. Ossio clearly had a blast in rendering this battle royal between the Autobots leader and Knight of the Solstar order, and things escalate further when Windblade, Soundwave, Arcee, and Jazz enter the fray! As well as the gorgeous renditions of the Transformers and ROM, I was also really impressed with the detail Ossio lavished on the human characters of G.I. JOE and M.A.S.K Sebastian Cheng’s colors are splendid throughout, the scenes with Prime and ROM fighting in Umpqua national forest are awash with lush, vivid hues, while G.I. JOE Governor’s Island HQ is all deep shadows and stark metal surfaces, Blitzwing’s torment is also striking, and the bright intensity of the high octane chase sequence near the end is exhilarating in the extreme!

Kup and Aileron’s investigation into what caused the Ore 13 to explode in Mount Olympus in Greece reveals an interesting radiation signature, and this sets REVOLUTION #2 on course for a fast and furious confrontation to close out the issue between Matt Trakker and the M.A.S.K: Mobile Armored Strike Kommand team. Using high-spec cars outfitted with bootleg Cybertronian spare parts, M.A.S.K sure make their presence felt in this issue as they catch the Transformers off guard, but it would seem someone else has also got their eye on the mysterious Ore 13. REVOLUTION #2 puts the pedal to the metal as IDW’s crossover kicks into high gear, the creative team have clearly pulled out all the stops for this issue, the pace hardly lets up for a moment, and its really beginning to feel like we are well on the way to an action packed epic!