Review: This episode of AoS felt an awful lot like a slightly more serious, but still fun episode of Doctor Who after we get a bunch of shoddy CGI ghosts who apparently can still touch things but not be touched themselves. That happens more often than you’d think in DW. However TV budget be damned because I felt the addition of the wonky ghosts were a fun addition to the show. I definitely wasn’t expecting to get much out of the ghost from last episode this soon, let alone a whole party of them, but I will admit that after this episode where we get to really meet the woman I think in future viewings it will lesson the menace that she brought in the season premiere.

Last episode saw a ghost appear from a mysterious containment unit that began to effect those around her and bring them to madness. We see the extent of that madness and paranoia in May who goes on a rampage through the base after she begins seeing everyone’s faces turn into horrible malformations. I also wasn’t expecting to get this much out of May and her affliction this soon but I’m quite happy that, like the host of ghosts, we got it as quickly as we did.

Going back to those ghosts however, like I said the CGI is pretty atrocious but if that’s the price I have to pay in order to make sure Ghost Rider keeps looking just as awesome every time he transforms – which happens again this episode – then I’m all for it. We get a lot of questions raised after our ghost lady from last episode frees a bunch of her friends from other containment units within a shut down facility. Like what is a “Darkhold?” and who is this mysterious “him” they couldn’t stop spouting off about? How can these ghosts interact with the world? And why were a bunch of units containing souls allowed to just remain sitting around in a not-so-classified facility that’s been shut down for years?

One of those I can Google the answer for, but I won’t. The second one is just a dialogue cliché that I hate in all media and I will assume is the Ghost Rider for now, and the other two are just things that I’m not willing to worry too much about because suspension of disbelief. But questions are questions, and really it was these things with the ghosts that I had the most problems with. Past that it was a pretty enjoyable episode.

As the title of the episode tells us we finally get to meet the new Director of SHIELD and how they handle it was certainly very surprising. I’m not sure how I feel about Director Jeffrey Mace just yet. I love that he’s the cinematic version of the comics character Patriot but right now he’s definitely taken on the cliché archetype of trying too hard to be likeable while also turning out to be a man who keeps certain things at arms length. I honestly think he will become someone I root for in the future but for right now I’m more curious to see where his storyline goes.

Speaking of that storyline however, I was quite surprised with the amount of information we got from him and insight as to why he was chosen as the new Director. We all thought it was because the world thinks Coulson dead, but really Coulson himself stepped down and asked the President to consider someone with powers that the people could trust once SHIELD goes public – which as of this episode hasn’t yet. Thus we get the reveal later on that Mace is an Inhuman who seems to have super strength. I gotta say that is very exciting. 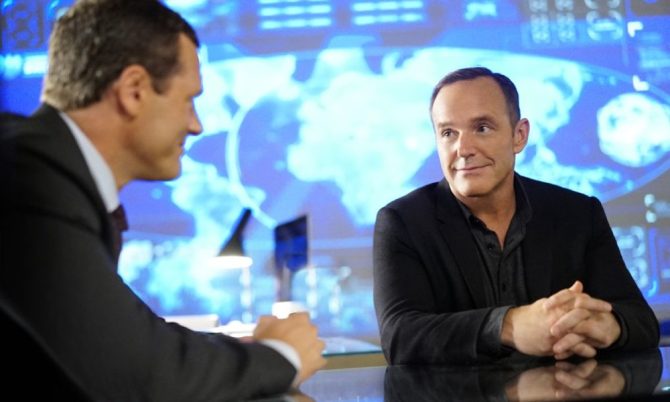 We do get some Peggy Carter call outs in this episode as well which I truly enjoyed but was also saddened by when Coulson says that many of her adventures were not documented which only rubs salt in the wound that is the cancellation of Agent Carter. Still though it was real nice to see some love thrown her way.

Next we go over to Daisy and Rpbbie who have some nice chatting up time after Daisy does enough cyber sleuthing to convince the other guys at the mechanic shop Robbie works at that she knew him since they were kids. It’s fun to watch but I must say, Daisy, where do you find all this stuff out and only in a couple days time?

I’m really enjoying the Daisy/Robbie dynamic and it’s fun to see them banter back and forth with one another. Robbie is greatly serious character here for her to play off of and it’s nice to see that by the end of the episode he respects her enough to want to possibly maybe team up with her. Before then however he kidnaps her, ties her up, tries to figure out a reason for the Spirit of Vengeance inside of him to kill her, she jumps onto his car and rides on top of it for a few blocks, and the two meet-up at the facility haunted by ghosts that I mentioned earlier in order to destroy one of them.

You know, usual first date stuff. Though in this case it’d be a second date.

I’m very curious to see Ghost Rider’s connection to all of this as well as his connection to the ghosts. We may get that answer as soon as next episode even after the episode ends with Robbie telling Daisy he thinks what’s connecting the ghosts, the Watchdogs – who’re back this season – the Aryan Brotherhood as well as the Chinese Mafia is him. I think that’s going to be a rather interesting game of connect the dots and I’m so glad Agents of SHIELD isn’t making us play the waiting game for all of this.

Finally Mack and Fitz go on an adventure to the facility of ghosts after figuring out that the alloy the containment unit is made from is only made in 3 facilities in the country and thanks to some events at the very beginning of the episode they’re able to track the origin of this box down to California.

It ends up putting them in direct conflict with Ghost Rider and Daisy allowing Mack and Fitz to meet the Rider up close. He by and large ignores them, which is his M.O. for those who don’t deserve it but their faces are pretty priceless once he transforms. This does lead to an emotional reunion between Daisy – who ends up getting medical help from the two of them – and Mack and Fitz.

Mack discovers Yo-Yo has been giving Daisy the medicine she needs for her wrists for a long time now which leads to an emotional outburst of frustration on Mack’s part. Which is understandable given his feelings for both girls. One as a love interest the other as an invaluable friend. I’m curious to see where this takes Mack and Yo-Yo’s storyline. I was really hoping to see them end up together.

This was a pretty good second episode overall. I did have a few reservations about it nothing too serious that it’s going to making me angry for the next week while we wait for episode 3. I still think Ghost Rider has been an amazing addition to the show and new Director is very interesting after finding out that he’s an Inhuman. This season seems to be a promising one and I cannot wait to see what comes next.

Final Score: 3.5 Discount Spectres out of 5