Summary: The world has changed in the wake of Kaguya’s defeat at the end of the original Naruto series. Those who survived have went on to live normal lives, settle down, and have children of their own. Now all of those children are old enough to become fully-fledged ninja on their own and thus Boruto’s - son of Naruto - story begins.

Review: 4 chapters in and we’re still in movie territory. I really don’t expect it all to be over in the next few chapters either, but the closer we get to original story material the happier this reader will be. It’s not that I dislike the story going on, honestly I really enjoyed the Boruto movie when it first came out and I watched it. The problem is as I’ve said before this story already exists in other media before it existed here. In both anime and novel format. We don’t need to relive it here because anyone reading this manga has probably already seen the movie.

On top of that it’s a story originally written by Kishimoto and I want to see what stories this new writer can come up with. But with all that being said let’s just get into what’s going on with this latest chapter. It’s a pretty short chapter that sees Naruto being told about his son passing onto the next round of the Chuunin Exams. He visits Boruto in his room and the two have a heartfelt talk, this was one of my personal favorite scenes when I saw it in the movie. It’s just as moving of a scene here.

The second round begins and we get to see several different Genin go up against one another in a montage that’s pretty fun to read. Boruto wins his first match and then goes up against Shikamaru’s son in his second match. Boruto wins of course but is ousted by his father in front of everyone when Naruto catches a glimpse of the chakra machine Boruto’s been using so far to pass the Chunin Exam with relative ease. 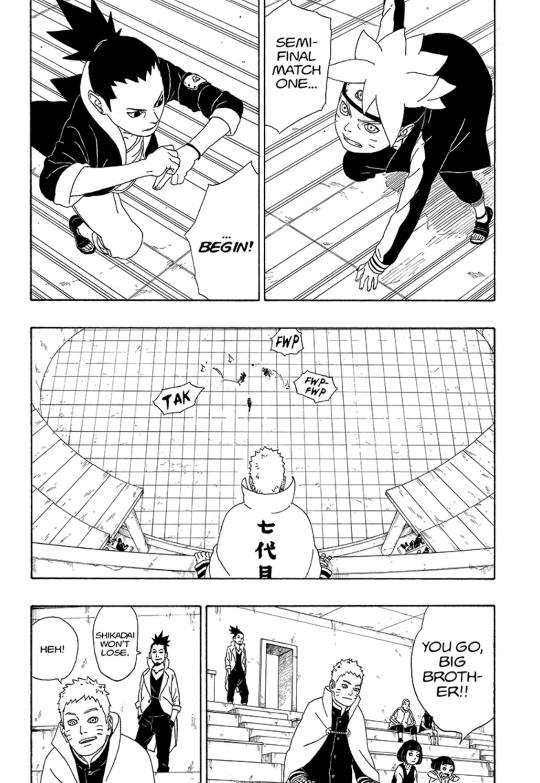 All the while we finally get a glimpse of the villains of this arc as they head towards the Chuunin Exams drawn by the immense amount of chakra hiding within Naruto thanks to the Nine-Tailed Fox. Originally in the movie there’s a cold opening where Sasuke fights these two and that’s out first time seeing them. In the manga that cold opening was replaced by a really cool glimpse of the future that I hope doesn’t take 700 (monthly) chapters for us to reach.

I know who they are, but I won’t spoil that for now. I’ll wait till the manga itself reaches that point in the story. I actually really liked these guys when I first watched them, I hope to feel the same in the manga. Though considering this adaptation hasn’t changed much from the core story I think I still will.

It was a fun chapter. The fights, what we saw of them, were a lot of fun. Ikemoto’s art is still great. I really think he’s a worthy successor to Kishimoto on the art side of things. I’m looking forward to what’s coming next, I’ll try not to keeping beating up the manga for being something I don’t want it to be. It’s just hard to when I would rather see new stories, by this new writer, doing new original work with the next generation of heroes.

Right now it’s not Kodachi’s story, so I still can’t tell you if Kishimoto did the right thing by turning this series over to him. And it makes it really hard to know or get excited for what’s coming next in this series. And we’re almost half a year into this series already.

Final Score: 2 New Challengers out of 5