The ranks of Hell are packed with demons, daemons, archdemons, monsters, weird insects, and all other manner of creeping, crawling, hellions.  What creatures lurk amidst the charred landscapes, who keeps them in check?

Kevin Gunstone (Future Primitive, the Agents) has a theory.  In his latest comic from Amigo Comics, Planet of Daemons he places one man solely in the path of all wandering creatures of Hell.  Amos Deathridge is a puritan and magistrate in the occult realm of Qliphoth, where he roams the barren country around the worst place ever and puts the hurt on any baddies he find wandering about.

This is the first issue of “The Eye of Lucifer”, a four part series, and we get an introduction to Amos, both in Hell and out of it, in Puritan-era Massachusetts.  It’s 1649, and in the borough of Ipswich, a herd of cows has been killed an fed upon by something.  The neighbors herd wasn’t touched, which makes all of the worried Puritans start thinking “witchy” thoughts, and all eyes turn to the Widow Barebones.  Her house smells of sulfur and there’s some question as to weather or not she can actually say the Lord’s Prayer while touching a bible, so they haul her off to the hangman’s noose.

Meanwhile in Hell Amos comes across the corpse of a fellow “good guy”, a Templar who Amos reanimates to get the story of his untimely demise.  Amos finds that he must go to Lilith’s Palace, where the birth of a new succubus queen is soon to happen. 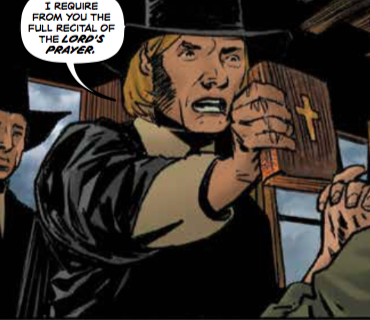 I really enjoyed this issue.  The idea of going to Hell for a specific purpose is not unusual, but I’ve never heard of a man patrolling Hell to guard the land of the living from the horrors that await.  Amos Deathridge seems, at this point, a good man who is trying to do what is best both for Earth and in the confines of his faith.  I loved the idea that there are a few nomadic heroes wandering around there.  Gunstone really does a good job of laying out the mythology and keeps the demons in short supply for the introductory issue.

The design is very nice, and Paul Moore keeps the demons fairly traditional for the first book, though there were some nice touches that reminded me of some Lovecraftian horror.  The Colors by Stefan Mrkonjic are desolate for the Hellish parts, and are muted for the parts that take place in Massachusetts.

Planet of Daemons is one part Conan, one part In the Mountains of Madness, and all awesome.  Gunstone continues his run of originality and great writing paired with impressive artwork.