Summary: Now that we’re in month-to-month chapter review territory, things are about to start to get a lot more interesting. Okazaki’s chapters lengths for Let’s Lagoon are often rather short. Averaging generally about 12-13 pages every month. Given the Japanese manga making way, that few of pages generally isn’t a lot of time to get in a full story.

Reviewing them in bulk however leaves me plenty to talk about, unfortunately I’m now caught up to the series and have now lost that privilege. That’s okay though, I’ll still attempt to make this a rigorous and worthwhile read.

Chapter 50 is a short but sweet and fun episode. I was honestly expecting something big to happen with it being such an importantly numbered chapter but instead Okazaki decides to give us a few days in the lives of Yamada, Imaise and Nori. The 3 of which have now been stranded alone together on the Lagoon Resort.

There are plenty of more adult ways this can be taken give that it’s a guy with two beautiful girls pining after him, alone on an island and there’s a point in here where Yamada even points out that on some night the 3 of them must share a small tent together.

Personally, I’m glad Okazaki keeps it PG-13 and allows these kids to be kids and simply survive together. Something I believe I praised him for back in some of my earliest reviews for this series as well. However, given the state of the situation it continues to be slightly jarring actually seeing both Nori and Imaise pine after Yamada at the same time.

Nori we’ve come to expect it from, she’s simply that type of character. Imaise however has been at arm’s length since the series began and though it’s nice seeing her finally tap into her true feelings it just doesn’t feel like the same character just yet. This isn’t like the time where she almost became a tsundere character – being mad at Yamada for a rationally simple mistake. It’s different because it’s a good change, and change of growth, but it’s also slightly out of place for this girl we’ve come to know over the series.

As the days go by however, we get glimpses into just how these kids are surviving. All the while having to deal with constantly looming Shark just off shore. They come up with a simple yet impressive signal-based communication system and each person gets their own chores to do. What I like the most here is that these characters are all blessedly getting along and the lack of tension between characters breathes life into a series that quite frankly excels because of the lack of tension between characters. 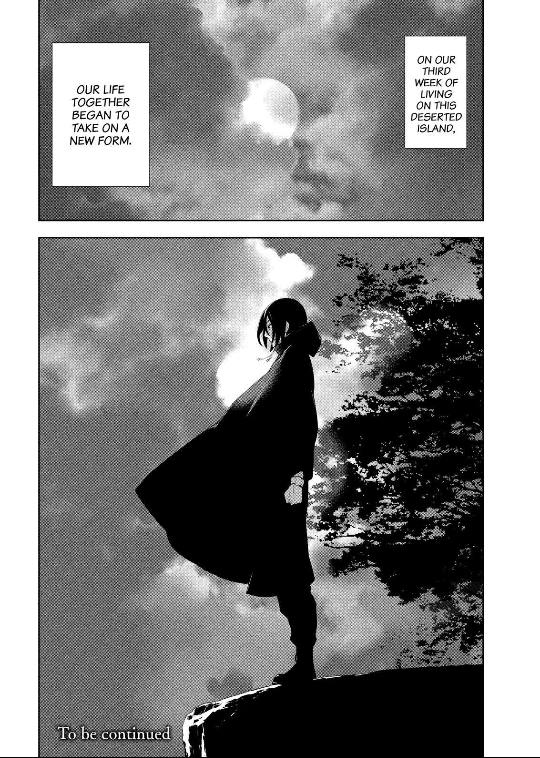 Nori and Imaise like the same guy but are still great friends. Yamada and give a task to one of the girls simply because it needs to get done and he has to do something else and they don’t yell at him for telling them what to do. There’s power tripping from anyone only helping hands in surviving. There’s already enough tension with the ever-changing landscape of the island and the time stream fog that can return at any moment.

If there’s one thing I wish this series would hurry up on however it’s the “tragedy” portion of the series. When I first picked this up one of the categories it fell under was “tragedy” and don’t get me wrong some very stressful things happen in this series but so far nothing immediately tragic has happened. Not yet. That all changed when future Yamada appeared however and explained he was returning to prevent an awful tragedy.

I can guess that the event unfortunately ends up happening to Nori, my favorite character, but I do wish this series would hurry up and get there. I am getting a tad impatient for that. Thankfully the issue ends on a cliffhanger of Future Yamada looming overhead from everyone as young present-day Yamada narrates to the reader that their lives were about to change once again.

It’s a darker toned ending, and it may still end up being a few more months before we actually even get to the beginning of this mysterious event, but I honestly hope we start getting their next chapter. Because I really, really want to know what happens next. It’s been 50 great chapters so far, let’s step up the pace Okazaki!