Story and Pencils by Frank Miller

In fact, I would say that since 1989, there has been no screen version of the Dark Knight that didn’t take Miller’s dark portrayal of Batman in The Dark Knight Returns into account.  Looking at the most recent trailer of Batman vs. Superman you can see that they’ve liberally borrowed from the very look that Miller created.

How has this tome held up in the last thirty years?  Because yes folks, it has been thirty years since the Dark Knight took to the streets of Gotham in that fantastic tank, wearing battle armor never before seen in Crime Alley, and threw razor sharp batarangs into the Joker.  Thirty years since he fought Superman, and won.  How does it read after all of these years? 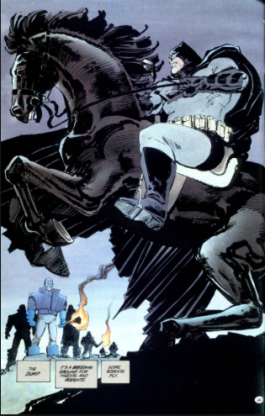 Still the always-wordy Miller seems to eat up the pages with dense prose, filling the white with words wherever his black inks don’t cover.  But the story still seems appropriate.  The world of the 80’s was a scary place.  The cold war was raging quietly behind the shuttered doors of the White House and Kremlin.  The fear that at any moment someone was going to drop a giant bomb was always lurking.  Miller took that fear and translated it into a story that young people could relate to.

Batman has been gone for 15 years.  Super heroes have left or gone into hiding, some, like Superman, doing the government’s bidding in return for peace and quiet and a license to practice heroism.  Batman left the scene.  Until now.  When crime once again grips the city.  Commissioner Gordon is retiring and a group of thugs called “the Mutants” have the streets on lockdown.  New commissioner Yindel has a tough job ahead of her, and little support from those that are supposed to be on her side.  And then Batman returns, in the best way possible.  He shows up stop a “newly reformed” Harvey Dent as he goes on a spree.  Just like before, when the villains arise, so does Batman.  (Or is it the other way around?)  People have forgotten why they needed such a hero in the past, and when he returns there are many who aren’t very happy.

As the story progresses we get the inclusion of the Carrie Kelly Robin, one of the best Robin representations in my opinion, and even some Selina Kyle and Superman action.  Batman beats the Mutants’ leader in single combat, and they see him as the new leader.  They begin a mission of vigilante justice.  Everything comes to a head during the Corto-Maltese Crisis, very similar to the Cuban Missile Crisis, when Superman foils a rebellion there and the Russians take offense and launch a nuclear missile that detonates.  The resulting electro-magnetic pulse shut the switch off for Gotham, and riots ensue.  All of this happens just after the Joker kills himself in the most spectacular fashion.  Batman rally’s the mutants, and they keep the peace as Gotham tries to tear itself apart.  Then the president, a not-so-subtle Ronald Reagan lookalike, puts the order to Superman to take care of the Batman problem.  Thus begins the showdown that is the crown jewel of this book.  Batman’s battle armor is exactly like it is recreated in the new film trailer, bulky and very mechanical, and strong enough to take a punch from Superman.  It’s a gripping 9-page battle that ends in the most spectacular fashion. 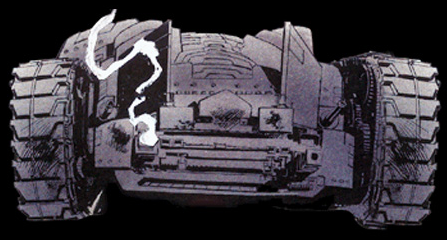 Much is said about Miller’s art style.  No matter what your preference, it’s striking.  His use of shadow and strong line are great in the creation of a new kind of Batman.  It was exactly the way to recreate a character that everyone grew up on.  With a drastic change of art comes the new hero and helps to ease the transition with the darkness in the character.  Inks by Klaus Janson and colors by Lynn Varley are fantastic.  The color work especially makes Miller’s pencils jump.  John Constanza’s lettering must be mentioned as well, as Miller has so much dense writing that it took a special way of paneling and lettering to get it all in there.

The book holds up.  Even after 30 years the themes of fascistic government, plotting behinds its’ citizens backs, doing everything it can to keep the tenuous balance of power in place, seems like it fits today.  The nuclear scare is still relevant, and some would say that the countries are the same that scare us today.

The main thing here is that Miller recreated the Batman in a way that hadn’t been done previously.  He darkened the man and made him more human at the same time.  Miller showed that perhaps it really was the Bat who created the criminal element in Gotham, and if that is the case, he would be the man to take it out as well.  He influenced an entire generation of creators who took that dark hero concept and recreated it in their own universes.  Spawn, The Walking Dead, all kinds of comics have their origins in this Batman book, the one that said, “Damn right it’s dark, and it’s going to get darker before it gets lighter.”

The Dark Knight Returns remains a pinnacle of the Batman mythos and comic creating in general.