2015 saw the end of the ambitious Marvel Now wave of titles and the beginning of the even more ambitious All-New All-Different Marvel Universe. The result of the universe shattering Secret Wars, this new and different Marvel Universe has something for everyone but is far from universally accepted, especially by longtime Marvel readers, in fact many of them feel as though they have lost characters integral to the foundation of any universe bold enough to be called Marvel.

Case in point the Captain America debacle, for anyone living in a cave for the past several months, let me bring you up to speed; Steve Rogers is no longer the Star-Spangled Avenger. After Rick Remender’s amazing run on Captain America, way back at the end of Marvel Now, the shield and the mantle were passed on to Sam Wilson, formerly The Falcon. This is a pretty big change and as with most big changes it has stirred up some equally big emotions. Suffice to say not every Marvel reader was happy with a winged Cap or any Cap, who isn’t Steve Rogers, but the wheels of the Mighty Marvel Machine keep turning and changes continue to come despite fan approval or disapproval. 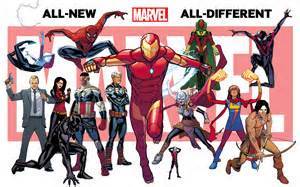 The year was a tumultuous one not only in the pages of Captain America but in most of the Marvel titles; the Hulk went from Indestructible to Savage to Totally Awesome, along with the title change came another major power shift as Amadeus Cho took center stage as the Gamma-irradiated hero. This change went down a heck of a lot easier for most, me included, mostly because of Greg Pak’s far less heavy handed politics. Current Captain America scribe, Nick Spencer can’t seem to get off his soapbox long enough to write a good action packed thrilling super hero story, which is strange because I love his work on Astonishing Ant-Man. Pak’s Hulk is everything Spencer’s Cap is not, mainly it’s fun. I was primed for Totally Awesome Hulk after meeting and speaking to Pak at this year’s Baltimore Comic Con at which time he presented the plot and direction changes with such excitement that I couldn’t wait for this book to hit my subscription box. Being a longtime fan of not only Pak’s work on the Hulk but more specifically on the Amadeus Cho character this was a “can’t miss” in my estimation and after reading the first issue my expectations were exceeded. Totally Awesome Hulk is a stand out in the ANAD Marvel Universe by any criteria but when you add Frank Cho’s eye-popping, mind-melting visuals even the most stalwart doubter would have to jump on board.

Another stand-out in the latest Marvel initiative is Extraordinary X-Men. The main reason this X-title outshines the other mutant offerings is Jeff Lemire’s brilliant character work. This book has the feel of the best X-books circa the 1990’s without any excessive nostalgia. The pacing is brisk, the dialogue lively and genuine, but more than anything these pages are full of heart. These are characters you can care about, not flat depictions of well-known heroes and villains to hang word balloons full of time tested tropes and catch phrases as so many of the X-titles unfortunately very often become. Ramos’ art is among the best in the business and is a spot-on perfect fit for this material. 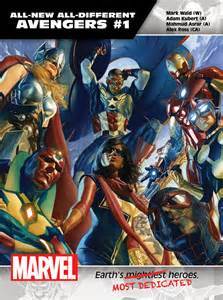 Anyone reading these current Marvel titles will certainly have noticed an overtly obvious shift from, the tried and true mutants to the more Marvel favored Inhumans. This species shift comes at a time when the cinematic and television presence of these characters is bigger than ever, coincidence? Now that would truly be uncanny. This stealing of the spotlight by the Kirby-created Inhumans has brought with it a slew of Inhumans stories and at least two titles featuring the name Inhuman and several others featuring Inhuman characters. First up is the All-New Inhumans written by Marvel’s current work horse, Charles Soule with art by the fantastically talented Stefano Caselli. The narrative focuses on the newly “Inhumanized” and the effects the Terrigen mist has had on them thus far. Dubbed NuHumans these very recently super-powered people are viewed with everything from fearful disdain to wide-eyed astonishment. A team of Inhumans led by Crystal must deal with not only these complicated issues but the added mystery of nineteen Skyspears that have now crashed into Earth. Taking on the Inhumans was no small task and Charles Soule does an admirable job, however the history of this Jack Kirby created race is deep and detailed; having said that, it should come as no surprise that Soule has not won over some of the more diehard Inhuman enthusiasts who demand strict adherence to continuity. Details such as the correct succession of power for the Inhumans in light of former leader Blackbolt’s absence would be for the strongest or most powerful of the remaining Inhumans to become leader; Soule doesn’t adhere to this established custom instead he makes Medusa the inherited leader over the obviously more powerful Crystal. This may seem like nitpicking but it is precisely this kind of detail that makes the Inhumans such an intriguing race. I like Soule’s foray into the world of these NuHumans but I’m not convinced that these are indeed the same regal people created by Jack Kirby. While Soule’s turn on the Inhumans may not have scratched you where the Terrigen Mist made you itch, it is a safe bet that his Daredevil did the job. Soule’s handling of the horn-headed hero from Hell’s Kitchen has started off with a major bang and while Mark Waid did a pretty impressive job on this title, Soule hits the ground running to bring back some of what Waid’s run took away or at least changed to a great degree. Daredevil is back in where he belongs; not only has he returned to New York but he has returned to the shadows, once more hiding his identity from the public. Waid told some brilliant DD tales but his outing of the sightless vigilante was too much for many longtime fans to swallow making Soule’s resetting of the status quo a welcome return to splendor. 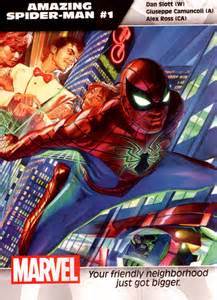 Well in a year where Thor and Wolverine change gender and Captain America changes race it stands to reason that our friendly neighborhood Spider-Man should undergo his own alterations to accepted canonical details. For all intents and purposes it appears that Peter Parker has become Tony Stark; when you consider that he has taken up the lease on the Baxter Building, the former home of the now defunct Fantastic Four and that he and his Parker Industries big brains are now supplying tech to SHIELD that is not such a far leap. In fact that is not the only rather odd juxtaposition going on in the lives of Stark and Parker; it seems that longtime Parker love interest and onetime wife Mary Jane Watson is now Stark’s girl Friday. Marvel’s resident polarizing force, Brian Bendis has taken over the writing duties on Iron Man and as is his style he has taken the character apart from the ground up to reassemble him in a more left-leaning Bendis fashion. I am not a Bendis Basher, however I am not a huge fan of everything he has done at Marvel either, I find myself somewhere in the middle. Bendis has a tendency to throw out established continuity in favor of elements that fall more in line with his personal style and politics, as he did with the amazingly detailed foundation crafted by 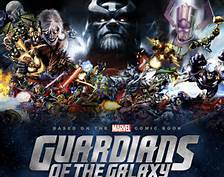 Abnett and Lanning on Guardians of the Galaxy, a 25 issue run that Bendis basically tossed out so he could tell his far more simplistic tale. Now he has dismantled the team completely in the ANADU version of GotG and it scarcely resembles anything close to the science fiction heavy narrative of Abnett and Lanning. Certainly there is a place for drastic change in an on-going story but when it is done for reasons other than plot progression it can become problematic as I believe is the case here. Bendis has done some great work particularly on Daredevil, New Avengers and on his Ultimate Spider-Man however the changes he has made to the X-Men and GotG I feel were motivated more by personal politics than storytelling decisions. 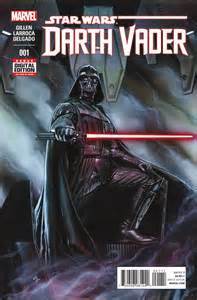 2015 also saw the return of the Star Wars license to Marvel and boy they did not waste any time in putting out some extremely high quality product. Jason Aaron and John Cassaday started things off with the flagship title in which Aaron perfectly captures the feel of a Star Wars film right down to the opening title crawl. His character work and dialogue ring incredibly true as do the environments and settings; authenticity permeates this series from the very first panel up to and including the most current issue. Cassaday is always brilliant but he really steps his game up to render the likenesses of each of the characters as portrayed by the actors that made them so well loved. Aaron also brought his substantial talent to the Darth Vader series with artist Mike Deodato. Again Aaron finds himself working with one of the best artists in the business and again Marvel has another gorgeous and engrossing Star Wars series on the racks, this is in addition 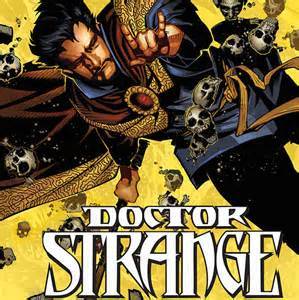 to writing a pretty great Doctor Strange book with art by yet another brilliant artist, Chris Bachalo. Several other Star Wars related series followed including a solid Princess Leia mini-series written by Mark Waid with art by Terry Dodson. Waid always a continuity conscious writer also took over the Avengers proper title. Although the team looked very different, consisting of a more diverse roster than perhaps ever before, Waid’s ability as a gifted storyteller to draw readers into a complex world full of detailed characters carried the first issue of this series and kept me hanging around for more.

For the most part Marvel had an extremely strong year; from the end of the Marvel Now chapter to the universe shattering Secret Wars up to the launch of multitudinous new number ones to end the year. Many of these new offerings came straight from the Secret Wars event, however the strength of the talent Marvel has called upon to carry the House of Ideas into the future made this a perfect jumping on point for new readers, even those who decided to sit Secret Wars out. I can’t say I was ecstatic about everything to come out of the Marvel machine but I can say that my subscription box is never at a loss for Marvel titles. So moving forward I can only hope that what works continues to garner readers and what doesn’t goes back to the drawing board for more tweaking and comes back stronger. I will definitely be holding the line and continuing to make mine Marvel in 2016. So even though Secret Wars has come to an end I will still be out there in the trenches covering all things Marvel for the mighty Bag and Bored, until next time True Believers, Excelsior!