(Seven Seas 2014)
Story & Art by Okayado
Storyline Ongoing
Summary: It’s every day life with Monster Girls in this ecchi comedy, telling the harrowing tale of a young man named Kimihito Kurusu who builds a harem of young, attractive girls with animalistic features. From a Lamia (half-snake, half human) to a Centaur (half-horse, half-human) and more.

Review: Continuing where the last chapter left off Centorea is now on protective duty of her master, Kimihito. The two find themselves out by a small lake where they’re spending the day camping to keep Kimihito as far away from the city as possible. One thing I was already looking forward to about this story is it’s a Centorea story and we get plenty of her.

Centorea spends quite a bit of the chapter practicing her swordsmanship and even gets to show it off in some cool scenes against giant insects. I’m glad this is a trade she’s been allowed to keep getting better at. It goes a long way from when we first met her and she brandishing a fake sword to appear a swordsman. Now she really is. 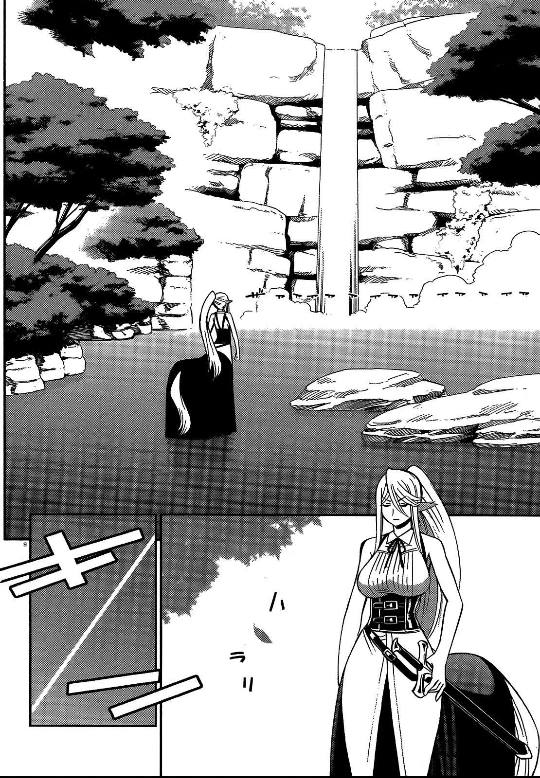 Rachnera also guest spots in this chapter as she follows Kimihito and Centorea to their camping spot as to give Centorea a bit of backup incase something goes down. Which it inevitably does, remember those giant insects mentioned earlier? They belong to Kiira the Killer Bee, the first of the illegal monsters who have their way into Japan. The very ones Centorea was tasked with protecting Kimihito from.

Though she calls herself a bee here the entire chapter she is treated more like a hornet and they utilize what they know about hornets to bring her down. Their machinations work, but I wonder if Okayado couldn’t have come up with a better pun for a name so that she is a hornet and is also treated like a hornet. Without the complications of her name and nature being two vastly different things.

Kiira is a fun villain though, and like most of the cast of this series she is an attractive female monster girl with some of her stripes doubling as black boy shorts. Also this wouldn’t be a Monster Musume chapter if we didn’t get to see the girls topless.

Centorea is stung by Kiira in her nipple and Kimihito is forced to suck out the poison. As well as Kiira gets trapped in a sauna by the end of the chapter so she’s forced to take her top off to try and get cooler. They’re of course gratuitous but it’s a staple in what makes this series part of the ecchi genre In other words, you get used to it.

This chapter is a two-parter as the story ends with our heroes figuring out that by trapping Kiira inside the sauna there’s an awefully good chance they might kill her Though obviously that won’t happen I’m quite intrigued by where they’ll take the story from here. Kiira’s gonna be too weak to fight back once the next chapter starts so I’m hoping for juicy revelations next time.

Derrick is a born and raised otaku with a love for comics, anime, manga and movies. The full list is pretty long, but that’s just the basics. Stories set in space are his bread and butter.
You can find more of his writing at IndieComix.net
@KazekunForeverRevierw