I met Jeremy Bastian briefly at C2E2 in Chicago this year. I was wandering artist’s alley on the second day, just kind of glancing at booths, when I saw this unassuming blue book sitting on the table. Then I looked up at the banner…

Sometimes you forget you want something until it smacks you in the face. Cursed Pirate Girl is like that. I saw Mr. Bastian’s work online, through twitter and instagram, and I remember thinking, “that looks pretty cool, I like the idea, file that one away in the keep-an-wary-eye out for that one file.”

Pictures online don’t do this book justice. (Forgive me if I’m gushing. This book is that good.) I’m starting from the beginning, for the “judge a book by its cover” phase. Archaia did a fantastic job with this book. The page edges are ragged, not straight cut, but really ragged, so that when you run your finger along the edge it leaves page dust on the table. This has the dual effect of breaking up the visual line of the pages when the book is open, and also making it a little harder to turn the pages. (More on this later.)

The story is simple and perfectly fun. The Cursed Pirate Girl is just that, the luckiest little girl around, able in every situation, willing in most others, and the one person in any situation who always comes out on top. Hers is the quest of the lost father, traveling through the ocean with a band of fantastical shipmates to the dreaded “Omerta Seas” where her pirate father is rumored to be. Along the way she crosses swords with governors and scallywags, and quips her way through every tight spot. Bastian writes her as a playful imp, and she jumps through the looking glass of the ocean into another world where swordfish are knights and potatoes have moustaches. 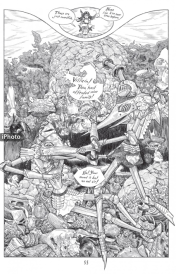 Now to the art. (Let the gushing commence in earnest.) This is some of the most beautiful and exact art I’ve ever seen. I watched Jeremy draw a little pirate skull in my copy of the book, and he must have been using a .005 pen tip, but they were the most steady and tight lines I’ve seen. Inside the book, you wouldn’t believe how much he puts into a page. Part of the reason it took me so long to get through the book, it’s been two months now since I bought it, is that I found myself reading two or three pages, then going back to just stare at the pictures. He fits so much into a page, and makes each of the little incidentals he throws in so interesting, that I couldn’t help but marvel at his line work. There is very little black blocking in the book. Everything is done with multitude of line. It’s a Herculean undertaking, considering he draws pirate ships, made of wood, and draws the wood grain in the boats. The sheer amount of line is staggering but doesn’t overwhelm the page either. He’s got a beautiful sense of balance when it comes to what he sees on the page, and the scales should always be tipped in his favor.

And the pages come into play with the art as well. The pages stick together because of the jagged edges, and you have to work a little to turn them. As your fingers stray to the top corner to try and get to the next page, your eye wanders elsewhere on the page and you find something you missed before, and get lost in the art again.

I have a 2nd printing, and in the back there are homage pieces by other artists, mostly indie writer/artists as well, all of the highest caliber, including Mike Mignola and David Peterson. Bastian is for certain in league with these creators.

You can do no worse than buying Cursed Pirate Girl. It has become one of the gems of my collection, and for certain a book that I will go back to again and again, if only to stare at the beautiful artwork.