Review: Ah, finally new chapters! And two at that! Following off the heels of last chapter featuring La-La, these two chapters begin a brand new arc that feels like a breath of fresh air for the series. After apologizing to the Mon Squad for getting them in trouble back at the hospital last chapter, to pay them back he agrees to go on a date with all four of them.

This may not sound revolutionary to anyone who reads the series because he’s already went on dates with the girls, right? Well in one chapter he did in order to help catch a bad guy plaguing Kimihito and the main cast of girls. This arc gets us away from the main girls and put the prime focus on each of the different Mon girls. 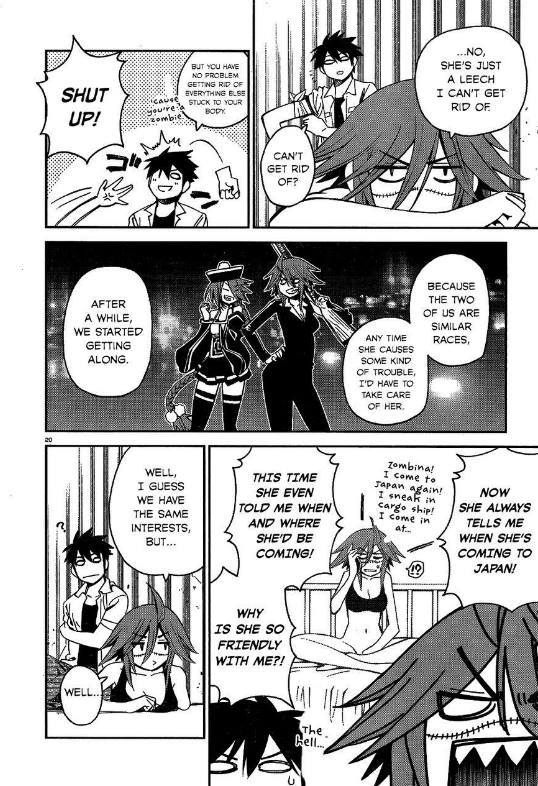 Some long overdue spotlight for these wonderful girls that generally get very little attention for all of their badassery. So in chapter 39 we get a spotlight on Zombina as her “date” with Kimihito is dragging him into catching another undead monster girl that has illegal found her way into the country. Illegally because she’s a criminal who lures men into international marriage with her using her ghostly powers.

Cici the Jiangshi actually comes off as a cute and interesting character and it’s rather fun to see her interacting with Zombina. It’s also great to get a bit of backstory on the two in the same chapters. Zombina actually used to be a human, which I find fascinating to get confirmation on and would love to learn more. And both of them started out as enemies but became frenemies after finding common ground with one another.

It’s just one of those silly tropes that’s overused but still seems to work here for these two because we’re seeing all of this from Kimihito’s perspective and they already have their history. Also it turns out the common ground is that their both hardcore fujoshi’s which makes absolute sense for Zombina.

Basically their big yaoi/male homosexual fans. I love it.

Chapter 40 is another great addition in this arc as Kimihito then takes Doppel out on a date. She’s the constantly naked loli character of the Mon Squad who can change into any form she chooses. However we never actually see any of her private areas as she hides them behind her constantly shifting hair.

This “date” is a bit similar to Zombina’s, but in Doppel’s own twisted way. She wishes for him to help her play pranks on other people which he decides to do but it also allows her the chance to seek out potential threats and to stop them prematurely. In this chapter we get to see the brief return of several different characters, mostly brief villains from earlier in the series.

And a follow-up to the Boar creatures that introduced us to the Mon Squad way back in the day as their leader has also illegally smuggled himself back into the country. It’s a fun and reminiscent chapter of days gone by and we also get confirmation that Doppel seems to be able to physically transform other characters as well if she so wishes to which like Zombina I find truly fascinating. I hope we get further snippets of information from the other two Mon Squad girls when we get to their chapters.

The only thing I had to raise my eyebrow to was seeing Miia in this chapter out and about on her own without Kimihito’s supervision. I’m not sure if her rights as an exchange student were upgraded, or what. That just really struck me as odd when she shows up in this chapter.

Otherwise really solid. Also we get to see Doppel go super effing creepy in Lovecraftian in her form. It’s glorious.

Two great chapters featuring two great characters and I’m really looking forward to the rest of this arc as it comes.