I’ve been going to cons for about five years now, and as I’ve grown with the con experience, I’ve found that meeting the creators, the artists and writers, has become what takes up most of my time there. I was at C2E2 in Chicago two weeks ago, and the number of great indie comics that I’d never heard of floored me.

There were also a couple I had heard of, and the creators of Packs of The Low Country, John Dudley and Don Cardenas, were there selling the first three issues of the book. To check out my review of those books, click on the link below. It’s a fantasy horror werewolf post-apocalyptic story set in the deep south, and a story you can easily lose yourself in. 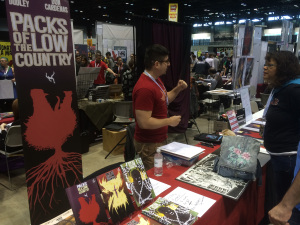 John Dudley and Don Cardenas strike you as just your average guys, sitting at a booth, hawking their book. But once you get to know them what really hits hard is the fact that both of them not only love comics, but also have poured a part of themselves into this book. It is an act of dual creation, not an artist/writer relationship but a co-creator friendship.

What was your inspiration for PotLC, what is its origin story?

“My family is from Beaufort, South Carolina, and I’ve always loved that area. The germ of the idea came when I was on a historical tour of Buford, and they were going on and on about how so many famous stories, Gone With the Wind, Forrest Gump, Prince of Tides, just tons of historical fiction stories were filmed there, and it seemed like an area ripe for fantasy. It really creepy, at night, there’s dripping Spanish moss and swamp alligators everywhere, it definitely made me think about werewolves, and Packs of the Low Country was one of the stories that could exist in that kind of environment, and it just spread from there.”

Do you have further issues planned, how far in advance, limited run etc?

“This is a six-issue story with a finite period at the end. We do have some ideas for things we could do going forward, but we’re tying all the loose ends up with this story.”

What is your creative process like? Do you sit down an put in eight hours?

“Working full time, it’s more like two or three, but with Packs it kind of like one four or five month period, hashing it all together, and then once I was working with Don, we retailored a lot of the story towards his strong suits and the things that he wanted to draw. So we worked together to make it a story that was something we both could add to.”

How did you go about gathering your creative team?

“We met as a result of this project, we both live in Chicago and met online, went to the coffee shop, and became friends right away. It almost happened too smoothly. You would think, these two guys who had never met each other, and meeting a great artist like Don, willing to commit hundreds of hours of his time, completely for free to co-create this project. We hit it off as friends right away, and he was already drawing a lot of werewolves and similar concepts. I was very surprised that things went so well.”

Have you shopped this around to any publishers?

“When we finished the first issue, we shopped it around to the a couple of big publishers, but came to the conclusion that we just wanted to complete all six issues, and then get a publisher to print it as one volume, just because it’s not an ongoing series, it’s a tough sell until we stick the landing.”

What did you grow up reading?

“I grew up reading a lot of comics, the strips, Garfield and Calvin and Hobbes. But I grew up in Bangkok Thailand, and finding American comic books was a big deal, you could find them at markets here and there, but never consecutive issues.”

Did you read a lot of manga?

“Not as much as you would think. In fact, if I had been able to find some I probably would have been reading it, but it wasn’t a very popular thing in Thailand, But I was obsessed with X-Men comics. Id’ find five year old single-issue comics and wonder what would come next. That could have been the germ of my writing, fabricating my own answers to those stories I couldn’t finish. It got me thinking about things in a different way, it fired up my imagination.”

What are you reading right now?

“All digital with Marvel, but I like to support people who make there own books like Steve Bryant. (Athena Voltaire) I really enjoy seeing projects like that coming to fruition. Southern Bastards hits real close to home for me. Having a complete and sometimes conflicted relationship with being from the South, as I think most people do no matter where they’re from. But that book handles it so well. Southern Bastards may be my favorite book on the stands right now.”

What do you want people to know about the book that I haven’t mentioned?

“I want people to be willing to take the dive with this book. It’s hard with an “unproven” creator. Our story is fairly dense; the art will grab you but it’s hard if you only give it ten seconds. Give us fifteen minutes, and if it’s going to grab you it will, and I’m excited that some people seem to be really jumping in.”

Marvel or DC approaches you and gives you your dream project. What is it?

“I wouldn’t have said this before six or eight weeks ago, it wasn’t even on my radar, but Swamp Thing. I love the Alan Moore and Scott Snyder’s runs, but Charles Soule’s recent run on Swamp Thing really fired me up, and made me think about that story telling universe, that it would be a fun place to explore.”

What is your origin story?

“Like most other artists, I was always drawing when I was younger, and when I became the first person in my elementary school to be able to draw the Ninja Turtles, and the subsequent fame that came from that, it was pretty infectious. I fell pretty hard into drawing after that. Unfortunately, sometime around the mid-90’s, when comics became a less appealing place in terms of content, I lost interest. But thankfully about eight or nine years later I fell back into it with the movies, and starting exploring what comics had become. It re-lit that fire, I started sketching for fun, and it’s been going on for the past five or six years, trying to keep getting better, to make up for that lost time.”

When John approached you, were you actively looking for a project?

“Actually no. I had started some projects with some people, and they kept falling through or they weren’t holding up their end, so I resigned myself to doing a web comic, doing the story I want, how I wanted to do it, and then I was on the 11 0’Clock Comics forum, of which we both frequented, had John’s post up. He sent the scripts to me, and there was maybe 50% where the characters, their personalities and arcs, and even the events in their lives, were matching up with the web comic I was doing. I thought, “John clearly has his stuff together, he wants to do this, and this has got to be more than a coincidence, some kind of fate, that this happened. So I jumped in and we’ve been plugging away ever since.”

Who are your biggest influences and who are you reading right now?

“The biggest influence in my art is Adam Kubert. That Wolverine run he did in the beginning, as spotty as it was because he wasn’t a monthly guy, it just hit me on all cylinders. John Romita Jr., John Romita, actually a lot of Steve Ditko. One of the first books I read were old, small digest-sized reprints of Spider-Man issues, and I tore through those. Right now, some of my favorites, are Ryan Browne of God Hates Astronauts, he keeps getting better. Mike Norton, I just immensely respect the quality of work he puts out and rate at which it comes. Bryan Level, Gabriel Hardman, Phil Hester the way he picks his blacks…there are so many great artists, I’ll just end up running down a list of everyone that’s at the show. (C2E2) I’ve been able to temper that “breaking pens feeling” by taking pictures on the computer and putting them into two folders, “Art that inspires me, and art to aspire to.” There’s inspiration to be found in how great some artists are, but those guys I want to aspire to, I try to imitate how they work, to use techniques that I like in their work in my own.”

How do you work? Digital/Traditionally?

Do you have other projects in the works?

“I always have other stuff I’m working on, but right now Packs is my focus. I have plenty of ideas that I have in the bank, but I’ll wait until Packs is done. I try to get a short done here and there, but right now I’m just on Packs for the moment. The last issue may be a double-size issue, so that’s a lot of art to get through.”

What you come away with here is the story of a couple of guys who found each other at during a sort of perfect storm of creation, and Packs is the result.  John and Don have the kind of working relationship that creators can often only dream about, a friendship and love of the medium that makes PotLC an engaging story.  Packs of the Low Country #3 is available on Comixology on the 20th of May, along with issues 1 and 2.   They are also available at http://www.packsofthelowcountry.com/

Check out my review of the first three issues of Packs of the Low Country here http://bagandbored.net/2015/03/27/review-packs-of-the-low-country/