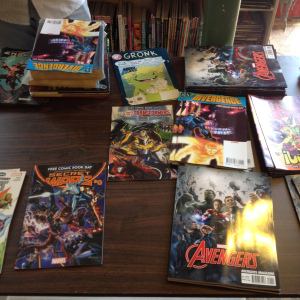 Lately my hometown of Baltimore has been in the news for some seriously heinous reasons;
first the unjustified killing of a citizen by six of the city’s worst police officers makes worldwide headlines, then as if that wasn’t bad enough some understandably enraged residents of Baltimore City riot in response to the killing and scenes of burning police cars and local stores in flaming ruins become all too familiar, however, like the Grinch couldn’t stop Christmas from coming to Whoville neither could all of this chaos and unrest stop Free Comic Book Day from coming to Baltimore.

If you are a serious comic book reader /collector or just a casual reader following a few titles and you live in the Baltimore area chances are you have paid a visit to my local comic shop, Universal Comics in Arbutus, which just happens to be where Yours Truly calls home as well. I have been a loyal customer since the extremely young age of nine and a serious subscriber since I was around 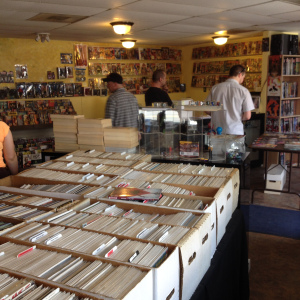 twelve or thirteen. Although the shop has changed owners a few times over the years, I have remained friends with each of them up to and including the current owners, John and Gordon who are doing a bang up job of keeping the Universal name and reputation for being a seriously well stocked, subscription based, old school comic book shop alive and thriving. If you are looking for an elusive back issue to fill in that run of Planetary or maybe a mid-grade copy of Amazing Spider-Man #129 there’s a high likelihood that you will find it at Universal Comics. Ever since I started collecting more seriously I have found key issues like Fantastic Four #48, Uncanny X-Men #94 and Daredevil #158 all within the hallowed halls of Universal Comics; the shop is much more than a local comic book store it’s an institution to the comic book lifestyle, a sequential art cathedral full of the hardest to find comic books in every condition to fit every budget, always accurately graded and fairly priced. John and Gordon are both comic book readers as well as collectors themselves not merely speculators trying to push product and squeeze every cent out of a hot title. Suffice to say this is the store where I spent the majority of my Free Comic Book Day. 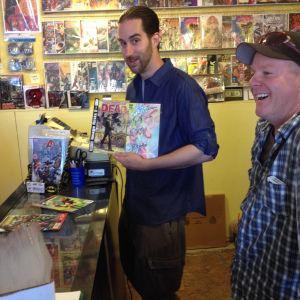 Co-owner Gordon is the newest member of the Universal Team but he is far from new to the world of comic books and comic related collectibles. He has a vast knowledge of the medium ranging from Silver Age to the most recent books from the biggest publishers to the smallest indy books on the racks and to top it off he is one heck of a nice guy. John is a true comic book and action figure aficionado, extremely well versed in the Mego and Star Wars product lines, which I might add are both well represented in Universal’s extensive inventory.

The store was buzzing with a steady influx of customers coming in as much for a good comic book themed conversation as for the FCBD offerings and the huge sale. The long boxes of back issues that line two of the walls were being mined for dollar gems as any book priced up to five dollars was on sale for a dollar; the bargain hunter (read this as cheapskate) that I am found lots of great Batman deals as did my buddy and usual cohort Matt who is also a loyal Universal subscriber. The store remained busy for most of the day as last minute shoppers made their way in to grab the free books and talk in excited anticipation of where each of us planned on seeing Age of Ultron after the festivities of the day were over. I have not missed a Free Comic Book Day since its inception so believe me when I tell you there was something very special about this one with the added excitement of the Avengers film. 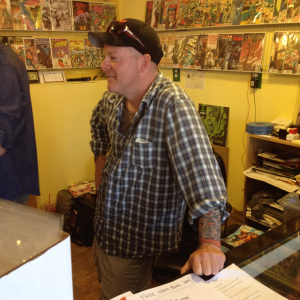 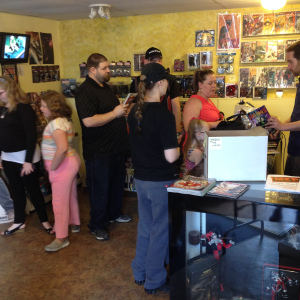 I had my wife, Stacy in tow so I tried (not too hard I must admit) to wrap things up in a timely fashion however I still took plenty of time to enjoy the sale and the comradery that exists only between comic book fans in their natural habitat. So after gathering my long box treasure I added a raffle ticket for a Secret Wars sketch cover variant to my final tally, said my goodbyes and left the shop to go see the much anticipated Age of Ultron. This was the perfect ending to the best Free Comic Book Day to date. So if you ever find yourselves in the Baltimore area True Believers, be sure to make it appoint to stop by Universal Comics and say hello to John and Gordon, heck if it’s a Wednesday you will most likely run into your ever-lovin’ blue-eyed assistant editor. So until next time True Believers, remember in Baltimore comic books are Universal, Excelsior!