Ales Kot has become something of a modern day Ian Fleming in that much of his work has featured savvy spy types facing villains bent on world domination in espionage filled narratives containing tons of the tried and true spy thriller tropes. And I, for one, am loving every single page of it, however Kot’s work on Bucky Barnes adds something of the old dime store science fiction pulp novel to the mix and the result is pure gold. All of Kot’s Marvel work including Secret Avenger, even the ill-fated Iron Patriot has explored the depths of clandestine government organizations and their roles in modern warfare, but on a deeper level Kot delves into the effects this kind of work has on the individual, particularly in the case of Bucky Barnes. In this series, Kot weaves the concepts of affection and warfare in an extremely sci-fi infused setting into a complex tapestry of the human condition, man at variance with his world and himself. 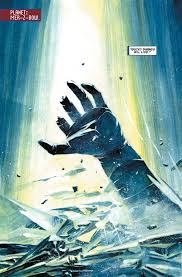 The story begins immediately following the events of last issue where on the alien world of Mer-Z-Bow Bucky has fallen in love with the planet’s ruler, Queen Ventolin, who was once targeted for assassination by the Winter Soldier. Now in a dramatic turn of events, the unlikely love struck couple find themselves the targets of the deadly villain, Crossbones. As the plot unfolds, a future Bucky has traveled back in time in an attempt to avert war, however his plan goes horribly awry and his past self is wounded, Daisy is stabbed and Queen Ventolin is beyond displeased in the process. Bucky’s main ally, Daisy now questions her decision to help him. Things get exceedingly complicated at this point as Bucky attempts to explain his history with Crossbones and their universe spanning, unending battle.

This issue is certainly one of the more exposition heavy chapters in the arc, but that is necessary due to the complex nature of Kot’s narrative. The pace remains brisk and the information that is imparted is definitely imperative to plot progression however Kot manages to keep the whole thing not only interesting but down right entertaining as well. 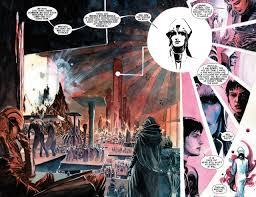 Visually, this series has been one of the more innovative and imaginative of Marvel’s offerings. Artists Marco Rudy and Langoon Foss collaborate to stunning effect. Rudy’s surreal; painter-esque style adds an element of lavishness and sheer beauty to his images. His inventive, artistic take on comic book/science fiction imagery truly elevates the medium to high art. Rudy creates some seriously stunning page compositions, blending scenes and panels into one another transcending panels in favor of a more flowing arrangement that really works well from a storytelling perspective. The future segments of the narrative are handled by Langoon Foss. The transition from the surreal to the more traditional comic book style follows the narrative change very nicely. Foss’ lines are clean and sharp depicting the more futuristic elements of the story. The contrast works for me as it creates an effective juxtaposition thus altering the narrative flow as well as feeling. Both of these artists do a bang up job excelling in very different areas giving the entire issue much more complexity and depths than perhaps a single artist could; super nice work.

Overall this issue did a fine job of progressing the plot and setting up the next issue. Kot cleverly merges several plot points and ends the issue with a major cliffhanger that left me anxious for the next chapter in this arc. All in all this is a satisfying installment in a hugely entertaining arc. (4/5)