For those of you who have been following the adventures of an intrepid band of humans, fighting for their right to live on a free world, welcome back. For those who have not heard of the Stronghold series yet, and don’t want any spoilers, than go buy it and catch up before reading. Spoilers ahead, but what is herein contained will be restrained and, dare I say, to the point.

Stronghold is based on the concept that the Earth has been subjugated by an alien race. The Ouranians have held the Earth in sway for many years, and every attempt at rebellion has been met with failure. Now humans have an ally in the Taya, the ancient enemies of the Ouranians. The Taya have provided our chosen heroes with battle suits of remarkable power, such that their strength and agility are increased and they can fly. Finally, as the humans learn to use their new gifts, it seems that there is a glimmer of hope amongst the native population of Earth.

Issue 6 of Stronghold drops with the main team splintered both physically and mentally. Part of the team has gone north to find what remains of the human military resistance, the others are told to wait in the city. It’s a dynamic that we see again and again, the chosen versus the un-chosen, but never fails to get old because of the need to explore character in all situations. Visaggio has a keen sense of who his characters are and a firm hold on their motivations. 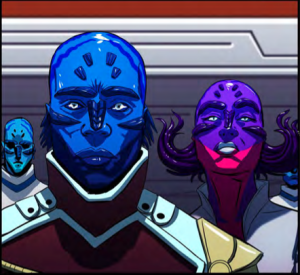 Kevin Michael Roberts continues to drawn aliens and people with equal alacrity. His aliens are bi-pedal and humanoid, so the conclusions that we draw while seeing their behavior is easy to translate to the way people in the same position would act. It is no secret that this is a comic that is based in the idea of “fighting the power”. The Ouranians, in charge of the Earth for many years now, have brought a silver collar for Earth. With the technological advancements of their culture comes the slavery that the members of the resistance are fighting against.

I haven’t mentioned the Taya yet. What is the motivation behind these supposed saviors? They too offer technology, this time in the form of fantastical battle suits, but can they be trusted? Should they? Are there any instances is Earth’s recent history where the invaders came cloaked in a robe of glistening friendship, only to turn on the natives? It seems that the rule of the Ouranians may have deadened the survival instincts of the Earthlings, a move that may prove disastrous in the end.

Stronghold #6 feels like the Empire Strikes Back of this series. It has the team on the verge of breaking down due to bad decisions, and so sets up what will either be their salvation or damnation. It seems that all may depend on the Taya, who have thus far proven trustworthy. Visaggio and Roberts once again engage my sci-fi gene while keeping the story captivating and relative.