Created and written by Ash Maczko

“I know that I am intelligent, because I know that I know nothing.” Oh yes, I’m quoting Socrates, that hemlock-drinker whose ideas became the basis for much of modern thought. And I understand, that even in this loose, internet-based world, that starting a comic book review with a quotation from a famous person is akin to starting a research paper the same way. In this case it’s apt. Because, like Socrates, I am constantly finding that I know nothing, especially in this medium.

I was walking the con, striding confidently through day 2 with my signed comics resting comfortably in by pack, a few sketches nestled in between, when a banner caught my eye. It was near artists’ alley, off to one side sandwiched between a guy selling large art prints and across the aisle from an art supply vendor.

The Devils Due Ent. booth. Now I’ve heard of these cats before. In my recent con years I’ve run into a couple of creators that have books with them, (reviews forthcoming) but this one caught my eye right away. The bloodied muzzle of a squirrel in rags, brandishing a club. What’s this? I thought. Could this be as amazing as it looks?            And so I stepped up and looked at the display, picking up Squarriors #1 and #2 and paging through them.

My first glance. The art is amazing. Who is this Ashley Witter? Why haven’t I seen this before? And this writing? If it’s half as good as the art then this Ash Maczko character is going to the top of my “see at cons” list. I bought them, got them graciously signed by the two creators, and went home.

Then I hit the wall that I so often do when I see something that I hope is going to be great. What if I start and it’s no good? It’s easy enough to take the financial hit of eight bucks, but I had already built this book up in my head. There’s really no cure for this ennui other than to dive in a hope for the best.

The best is what I got. 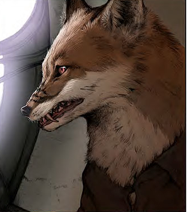 Squarriors #1 and #2 delivered in every way I hoped they would. Ash Maczko’s story is Animal Farm meets Lord of the Flies. It’s a post-apocalyptic look at the world after men have destroyed it. Violence vs. Reason. Maczko takes you through the animal kingdom and makes you feel for creatures that you don’t flinch from chasing out of your garage with a broom or BB gun. He builds a mythos that is enchanting, that brings allies together in a way that nature never intended, and makes foes that are equally disturbing. In a way it’s a portrait of humanity, of the way our differences, though so small really, can be magnified by overriding thoughts of domination and power. Did I mention it’s about squirrels? And rabbits, and foxes, and badgers, and cats. It’s amazing. 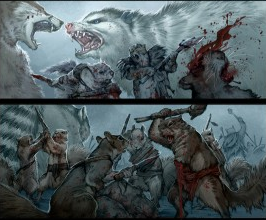 Ashley Witter’s art is what drew me to the booth in the first place. Her depictions of animals are spot on, perfectly realistic. If you think that you can only draw a squirrel one way, dash the thought. Witter proves that even squirrel faces can show emotion, that even the slightest upturned lip or whitish fang showing from beneath can convey all kinds of significance. It’s a study in life-drawing, and how you can subtly makes changes that will make the actions of those life-life creatures seem perfectly normal and in character. She colors the book as well, bringing that same attention to detail into her palette. It looks like some kind of strange animal stage play taking place in the field behind your house, or the abandoned rail car on the spur.

In the end, I find that there are always new things to see, and great artists and writers out there that I’ve never heard of. Although I wish them the best, I also selfishly hope that creators like Ash Maczko and Ashley Witter stay below the radar, where I can still see them at cons and pick up more magnificent work like Squarriors.