“It’s time to send the little ones off to dreamland, and set your radio’s dial to “spooky”. Bolt the doors, lock your windows, and steel yourself for mysterious suspense in this evening’s feature…Beyond Belief.”

Since finding The Thrilling Adventure Hour podcast I’ve heard that intro about a hundred times or so. If you haven’t heard of it before, The Thrilling Adventure Hour is a podcast in the style of old time radio dramas, akin to The Shadow and Annie, written by Ben Acker and Ben Blacker. The show plays on the tropes of the day but is so smartly written and acted that you soon forget that it started as a lark. These are ongoing stories that cover all matter of popular genres. There’s a space western called Sparks Nevada (the comic of that one came out last fall), a super hero story called Captain Laserbeam, a war story called Amelia Earhart: Fearless Flyer, and many others. But the “most popular” of them all is this month’s offering from Image Comics.

Beyond Belief is the story of Frank and Sadie Doyle, the upperest of the crust, and the tipsiest to boot, they see ghosts, and make absolutely no fuss about it. Their biggest fear, oft repeated in the show, is a lack of alcohol. Acker and Blacker could have done no better when they cast Paul F. Tompkins and Paget Brewster in the roles of Frank and Sadie, and Phil Hester uses their likenesses in the comic.

I’m not going to go too deeply into the story. Partly because if you’re a fan, then you’ll get it right away, and if you’ve yet to enjoy Beyond Belief, then you’ll be happy I left any spoilers out. It reads like an episode of the play. Frank and Sadie called in to fix a problem at Sadie’s best friends’ house. (Donna Donner for all you TAH fans.) Suffice to say that Acker and Blacker have a specific voice, and it comes through perfectly in the book. Any other writer may be hard pressed to get the tone right, the back and forth between Frank and Sadie which is so important in the radio play, but you can hear their specific writing voice right away. And as I was reading it I was hearing the voices of Mr. Tompkins and Ms. Brewster in my head as well. The tone was perfect.

As if this couldn’t be cooler, Phil Hester did the pencils. His work in this book is as good as anything, and the light tone balances some of the darker images nicely. This is a story about the paranormal, so Hester gets a chance to draw some great looking spooks and ghoulies. Eric Gapstur and Ande Parks ink the book beautifully, and the coloring by Mauricio Wallace helps to solidify that great Scooby-Doo type setting that this book takes place in.

I have to tip my hat specifically to Marshall Dillon, the letterer on this and so many other books. Dillon has a huge job here. Because this comic was conceived as a radio play that is podcasted, the dialogue has to carry a lot of imagery. Of course, when you’re listening to it, you’re focused on the words, and the images come to you based on what you’re hearing. Frank and Sadie are vernal fencers, as are all of Acker and Blacker’s characters. To keep that consistent with the feeling of the audio version, they have to be wordy in the comic as well. Dillon performs at the top of his craft here, able to make the balloons fit without crowding the artwork, and to loop the tails around so that you can still follow the conversation. Any letterers out there could study this book to see a master at work. 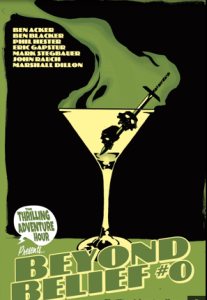 And…bonus! Issue #0 is attached at the end of this book, and we see what fans of the podcast will know it the long awaited first meeting of Frank and Sadie. Look for cameos of other regulars in the Beyond Belief world.

This book also is a bit of a callback to my youth, because it’s an encapsulated story. The nature of the radio play is that you know the characters and you get one new adventure a week. It’s the perfect format for a monthly book as well. Once the characters are introduced you can easily drop one-off adventures in. It’s nice to not need over-arching knowledge of a comic universe’s history to enjoy a book.

If you’re not a fan, you will be soon. Acker and Blacker have brought Beyond Belief from the stage, to the airwaves, and now to print. It’s a great companion piece to the podcast, and I hope to see many more issues to add to the mythology of Frank and Sadie Doyle.