The second chapter of Secret Wars begins to examine the effects of the incursion event in greater detail than ever before. Jonathan Hickman pulls back the curtain to offer us a glimpse of what exactly Battleworld is and what we can expect from here on out; in a word, the unexpected. Hickman leaves the work of tour guide to the legion of Thors as they are apparently not only Thunder Gods but the law enforcement arm of Battleworld as well and as such they are fiercely loyal to their liege lord and creator of this bizarre world, Doom. This issue focuses on the political infrastructure of Battleworld as much as the actual terrain; Hickman very cleverly uses Thor as a surrogate for us, device to speed through much of the exposition and explanation that would have otherwise bogged the issue down with voluminous amounts of set up and detail, grinding the pace to a standstill. To further accelerate the pace of this second issue, Hickman has streamlined the cast from the multitude of characters seen in the first issue to a more concise and easy to follow cast. The epic scope of the narrative is still very much intact; however this time around there is a clearer sense of conflict and exactly who the antagonist is.

There is a grand scheme at work here; warring factions vying for the favorable gaze of Doom to fall upon them and every type of subterfuge you can think of is fair game. Hickman seems to have taken a page or two from George R.R. Martin’s playbook when devising the plot of Secret Wars, certainly there are going to more than a few comparisons drawn between these two writer’s epic works. Hickman however has the edge when it comes to characters with which to populate his world; certainly no one would argue that point. The similarities, as obvious as they are, do not condemn Secret Wars to a Game of Thrones rip off, far from it. In fact Hickman has taken the concept of “variations on a theme” to the most extreme degree. The intricacies of creating a world and then waging an all-consuming war in that world is no small task and Hickman does it like no one else can, his attention to detail includes socio-political elements as well as the more familiar aspects of the Marvel Universes. These are the kinds of details that make this event different from any other before it; there is an element of completion to this story that underlies the entire work. I think that will change to a sense of re-birth as the story draws to a close but, for now that air of everything being on the line is tangible.

There is so much back story to tell and given Hickman’s penchant for meticulous detail I’m sure we are going to get most of it. I am looking forward to Hickman’s explanation of how Doom has come into the omnipotent power he now wields after appearing to die at the hands of the Beyonders as well as more history of Battleworld, is there any history of Battleworld for that matter, how are Corvus Glaive and Proxima Midnight going to ultimately figure into the grand scheme of things? Hickman has given us so many great threads throughout his Avengers’ run that I sometimes fear to lose any one of them would be devastating to the continuity consumed fanboy inside us all. 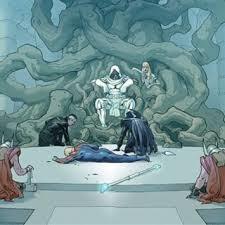 Once again Esad Ribic does a stunning job of blending super heroics, high fantasy and science fiction to perfection. Ribic seems to have the unique ability to reach into Hickman’s imagination and bring his words to amazingly vivid life, from his seemingly limitless ideas for rendering Thors to his lavishly gorgeous landscapes Ribic is spot on as usual. His characters express a full range of emotions from the rage and agony of battle to the more introspective and quiet moments of sadness or personal pain, Ribic has mastered the emotive face features of these characters in ways we have not seen before. There is an element of the old masters to his work that is unlike any other artist working today. Colorist Ive Svorcina brings an intense realism to Battleworld while maintaining a sense of the ethereal and fantastic, perfectly complementing and informing Ribic’s images in a way that is beautiful and bombastic at once.

Overall, Secret Wars 2 is the perfect progression from the events of last issue. Hickman unfolds his narrative in a way that is unique and entertaining; more than exciting this issue actually left me awestruck at times. While there is certainly a good deal left unexplained this issue takes major steps towards presenting a clear, coherent picture of the future of the Marvel Universe after this event. As for right now, Hickman and Ribic have created an amazing stage on which the rest of this huge event will be played out; Battleworld is just the beginning but in so many ways it is the beginning of the end. See you next time True Believers, Excelsior! (5/5)