I’ve heard for years about how great Valiant comics are.  For a kid who grew up in the 80’s, and who learned to love comics “the Marvel way”, these books were always ones that I bypassed.  It wasn’t anything agains the books themselves, it was just a preconceived notion that big two books were better.  In later years, I found that there were other companies that were making good books, sometimes great books.  And now we’ve come to a time when the market share, though by no means equal, has begun to tip in the favor of indie books.

Valiant has made a resurgence in the last couple of years, with relaunched number ones and a great popularity between new and old fans.  But I found myself in the same boat.  I had no investment in the characters, and it made it hard to read the books with anything other than the mindset I had when I younger.  (Not a good stance, but it’s the truth.)

The Adventures of Archer and Armstrong #1 may be the book to change my mind.  Written by Rafer Roberts (Plastic Farm, X-O Manowar) this new look at Archer and Armstrong brings a quirky fun to the book that I didn’t know was there.  This is a buddy superhero book the likes of which would make Batman and Robin turn in their union cards.

In this new series, we start with an Armstrong flashback showing what appears to be the guy that filled the “Archer spot” before Obadiah Archer did.  His name is Frank Devlin and we see the two of them in the midst of a caper, and the ensuing carnage.  Jump forward 60-odd years and Devlin has died, sending Armstrong on a mission into his own bottomless satchel in search of something tied to Devlin.  Archer finds the empty satchel in Armstrong’s room, a rope tied to the bed disappearing into it, and some unusual monster prowling about his partner’s room.  Introducing characters like Mary-Maria, leader of the assassin nuns, and Bacchus, old friend of Armstrong’s the issue has character to spare and enough plot to jam into two books.  It moves quickly and keeps the reader as entertained as anything on the shelves. 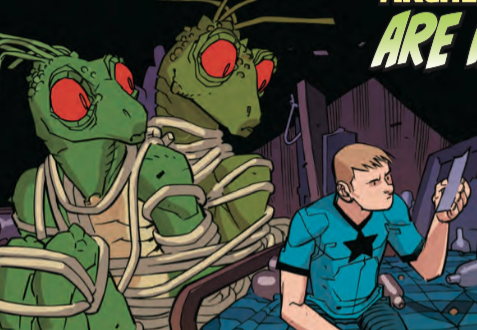 David Lafuente (Ultimate Spider-Man, M.O.D.O.K. Assassin) draws this book in his unique style, with nearly cartoony characters, and fantastic beasts.  His style is playful and it works perfectly for the tone of the book.  There are serious moments as well, and Lafuente handles them with equal aplomb. If I had to compare his style to something or someone a little more popular, I would say that he reminds me of Humberto Ramos’ art from the Cliffhanger days.  (One of my favorites from that time period.)  So I will keep an eye on everything that Lafuente does, if just to enjoy his smooth lines.

Brian Reber’s colors do a lot to enhance the playfulness of this book, along with showcasing Lafuente’s pencils and Ryan Winn’s inks, the colors are bright and bold.

The Adventures of Archer and Armstrong may well have changed my mind about Valiant Comics as a whole.  Perhaps, with the continual cross-overs that happen in the Valiant-verse, I will broaden my spectrum to include other titles, but I will continue reading this book for sure.