Heavy Metal was originally an anthology magazine, publishing all manner of sci-fi and fantasy comics, and until recently owned by Kevin Eastman, co-creator of The Teenage Mutant Ninja Turtles. The magazine was always a haven for fantastic artwork, featuring names like H.R. Giger, Terrance Lindall, and Walter Simonson. Add to that the writing talents of people like Archie Goodwin, the magazine has always been a source of inspiration and motivation for young comics lovers who can’t quite find what they’re looking for in the mainstream comic industry.

I came to Heavy Metal through the 1981 animated film of the same name, and have always held it in its treasured cult status. Last year the company was sold, with Eastman retaining publisher credits. The reorganized Heavy Metal will now publish stand-alone comics for the first time, and their choice to lead the way is Hoax Hunters #1, debuting in March. 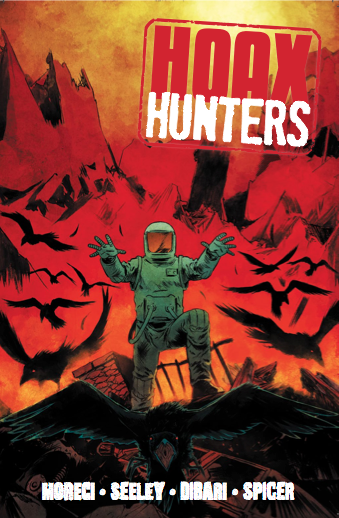 To sum up for those jumping into the series now, Hoax Hunters is the story of the crew of a reality television show who travel the country looking for all things supernatural or alien. Since the inception of the series they have become a more varied group, including Murder, a sentient flock of crows encased in a spacesuit. This new series follows the events of the old, bringing back Regan, Donovan, and Ken, with Jack still missing from the last series.

Michael Moreci (Roche Limit) and Steve Seeley (Hack and Slash) are no hoax. They write a compelling set of characters with their own distinct personalities and positions within the team. Each character has evolved from the first series and now boasts abilities and distinct traits that make them important to the overall function of the team. This is a team at a crisis point, splintered and kind of wandering through their productions, trying to make it during the absence of their leader. Ken has taken a rather fatherly role, tentatively leading the team in the void left by Jack. Regan and Donovan are the dueling personalities, cautious and rash, yin and yang, which make the dialogue crackle.

The effect of Christian DiBari’s artwork cannot be understated. His past work is varied, from shorts on the In The Dark Anthology of Horror, to The Hunger, and Hoax Hunters #13, his style is perfect for a horror comic. Dramatic shading and beautiful art make everything look like a classic horror film, and that work contributes to the constantly creepy feeling you get when you look at his work. Michael Spicer’s (Sons of Anarchy, Charmed) colors add that bit of flair that make the work pop, with subdued hues and dark tones in the really scary parts. It is wonderful stuff and perfect for the Hoax Hunters comic.

It’s more of the same from Michael Moreci and Steve Seeley. Hoax Hunters #1 is a continuation of the original story, but a new arc with a new publisher. The DiBari/Spicer team-up is one for the books. It’s a good time to come aboard, although I should warn you, reading this #1 will leave you wanting more, and you’ll be going to your LCS looking for the previous run to sate your appetite.   Hoax Hunters #1 is new and old at the same time, but still fantastic.