This past weekend I was given a chance to play the then open DESTINY Beta. Having played HALO in the past I was expecting big things from Bungie’s newest IP, and I’m excited to say that DESTINY was everything I’d thought it would be and much much more.

What makes DESTINY so great is how it shatters the mold of not just one genre but two. Both the very best of the MMORPG and a FPS genres being prevalent, and the very worst of said genres being left out. 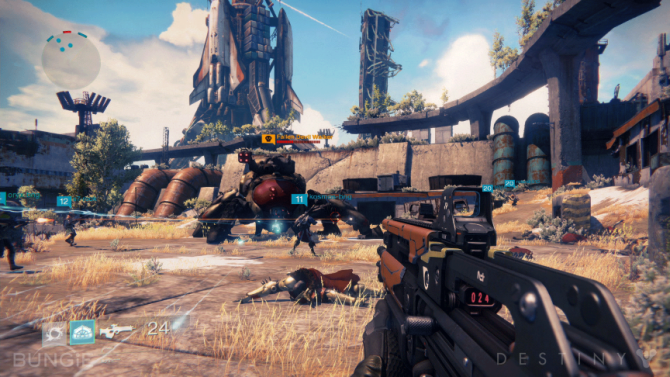 Actual gameplay looks even better than this!

In the MMORPG aspect of the game, squad making and cooperative “questing” is seamless, fighting over loot in nonexistent, and emotes are only a directional button press away. DESTINY also ticks all three boxes of what makes up a good RPG: exploration, customization, and choice.

There seems to be multiple open worlds to explore in DESTINY, each with their share of hidden loot and secrets. There are three character races with only aesthetic differences between them, which I love. Three well-balanced and distinct character classes: the tank-like Titan, the damaging Hunter, and the well-rounded Warlock. Choice is prevalent in the game with the existence of multiple ways of tackling difficult enemies, how you have to chose between many different weapon types each with their own strengths and weaknesses, and the different ways you can customize your character’s ability to adapt to a certain play style. 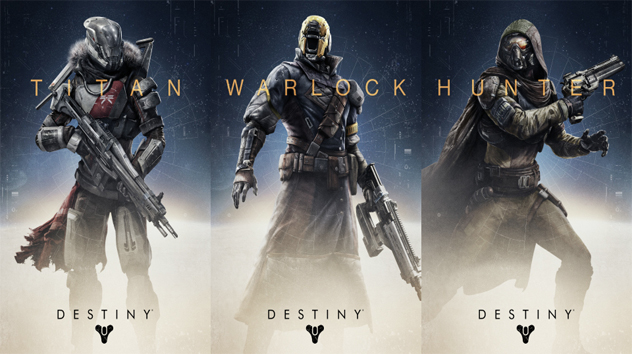 What really makes DESTINY so great is that it is an absolute blast to play. With FPS mechanics that rival the very best, as weapon recoil feels genuine, ammo is scarce so every shot counts, and enemies are powerful and strategic. These features are most noticeable in the climactic final mission of the Beta “Devil’s Lair” where the game really showcases its full potential. With epic boss battles, and waves of enemies who will wipe the floor with you if you don’t know how to approach each and every firefight.

Gone are the days when an MMO experience is restricted to repetitive cycles to tanking, damaging, and healing. Battles are cinematic and reactive, so be prepared to die if you don’t bring your A game. DESTINY ‘s public events are grand and feel both urgent and necessary in your fight against the forces of wait for it… “The Darkness.”

DESTINY also surprisingly features a very competitive multiplayer as well, which in the Beta was basically a domination based HALO-like experience. However, the experience felt new and fresh because of the seemingly infinite number of different combinations that can be created between character classes and weapon types, a feature not unique to but perfected by DESTINY.

I won’t elaborate on the game’s story, as I wish to save that for the full review. All I’m going to say is that it looks pretty epic, and I’d be surprised if the entity of it is resolved in only one game. So its safe to assume that a franchise is imminent.

My initial thoughts on how good a game the full version of DESTINY is going to be can be summed up with one statement: Don’t just buy this game, pre-order it.

Look out for the full review of Destiny sometime after the Destiny release on September 9, only on Bag & Bored!

Franco Romualdez is a young writer from the Philippines. He likes sports, Sci-Fi, and neo-geek culture. He also enjoys writing his own particular brand of poetry, if you’d like to call it that.